Over at the Dipper Ranch blog, biologist-bud Cindy has been telling the tale of a recently discovered addition to our Santa Cruz Mountains herpetofauna, the Red-Bellied Newt, Taricha rivularis, a species known previously to only live in Mendocino, Sonoma, Lake and Humboldt Counties, well north of the SF Bay and its Golden Gate.

I highly recommend giving the series a read. Cindy is a solid scientist and storyteller, and it is quite the little multi-year mystery, with twists and turns, and no clear solution yet. Natural and un-noticed? Or introduced? If so, when, who and why?

Here's the series on the Dipper Ranch blog in order, from the beginning:

It's also a mystery I've been pondering for several seasons, as I've had the pleasure and privilege of being one of the local naturalists helping with surveys and counts of the little newt beauts.

And goodness, are they a treat.

Not slightin' my homies, the Cal newts, Taricha torosa, either. We've been buds all my life, and I look forward to hanging with them every year.

But their relatives, the red-bellies, are photogenic and a half. 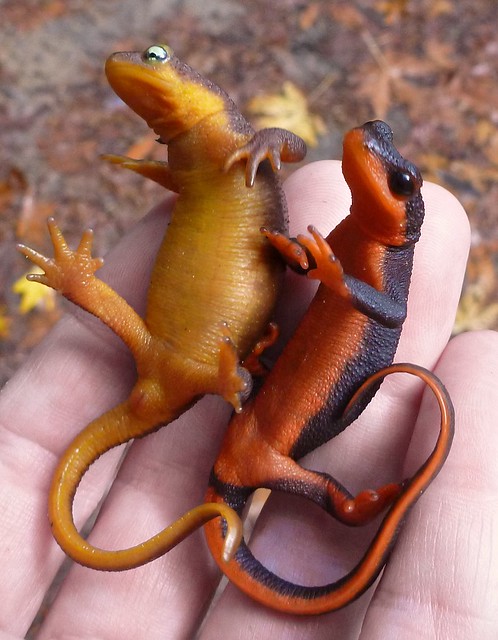 They're like the hot cousin you never knew your best friend had. 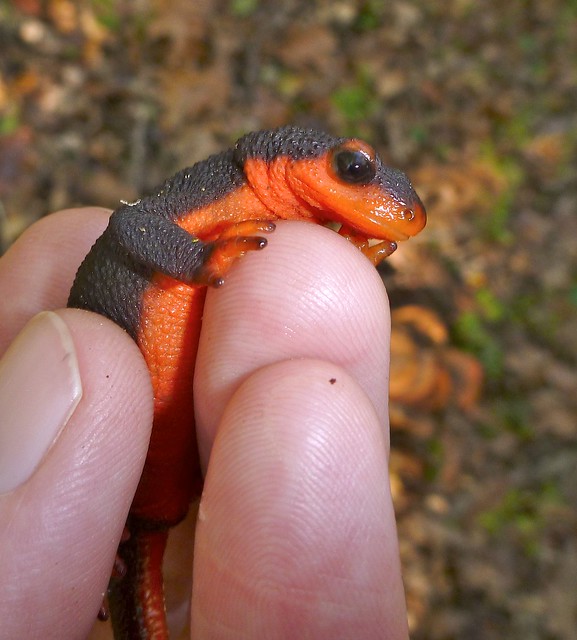 Or, as Frank Sinatra would say - "Baby, that's one hot tomato." 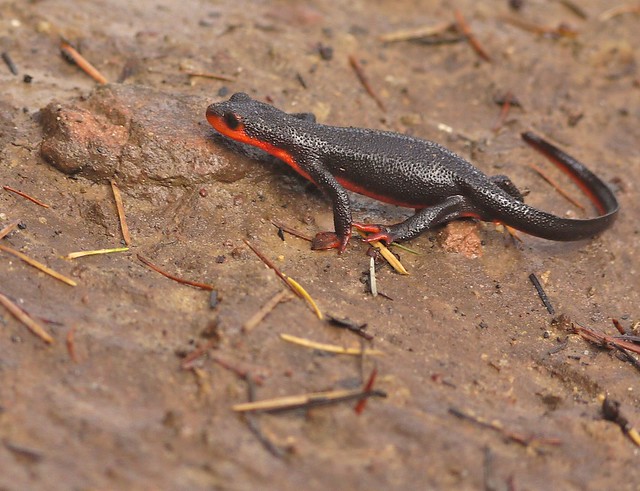 But I have to admit, when Cindy mentioned the mystery newts, I too squinted, stuck my lip out, and thought skeptically: "what you talkin' about, Willis?" "Local rivularis?"

Much as she had to discoverer Chuck, and had heard from others she'd contacted. A chain of disbelief. But, as I've written, Cindy doesn't cry "come see little red riding hood!" casually.

So I joined the team of newtists. 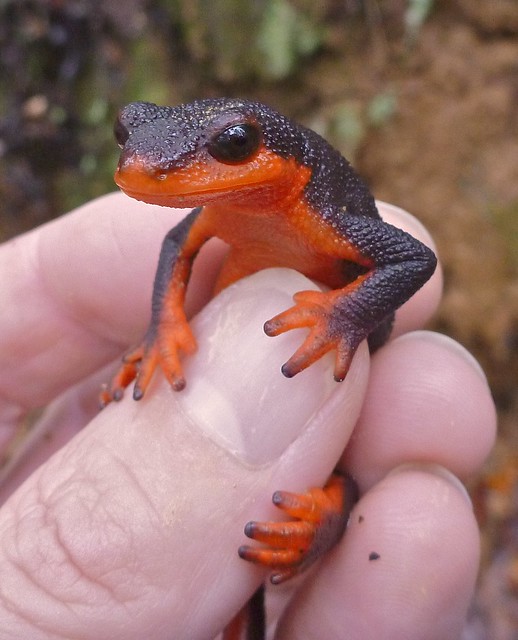 And as a helper on counts and mapping over the last few seasons, I can also say - they're not some recent bucket dump. It's an established population, living as if they've been there a long time.

Coming and going with the rains to terrorize earth worms... 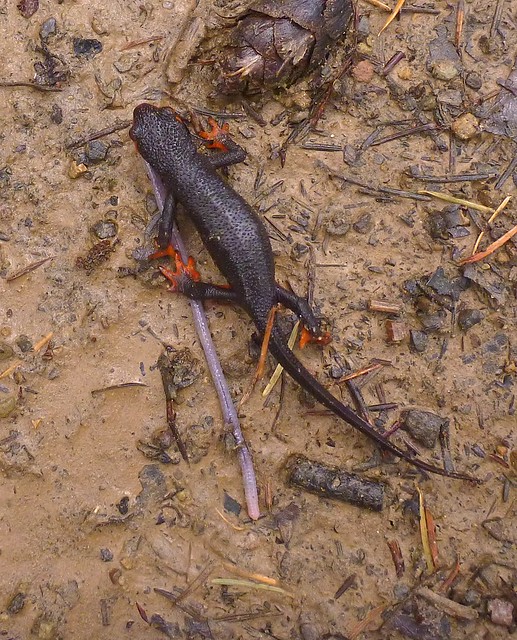 Trundling up and down between the creek and their favorite hillside estivation spots... 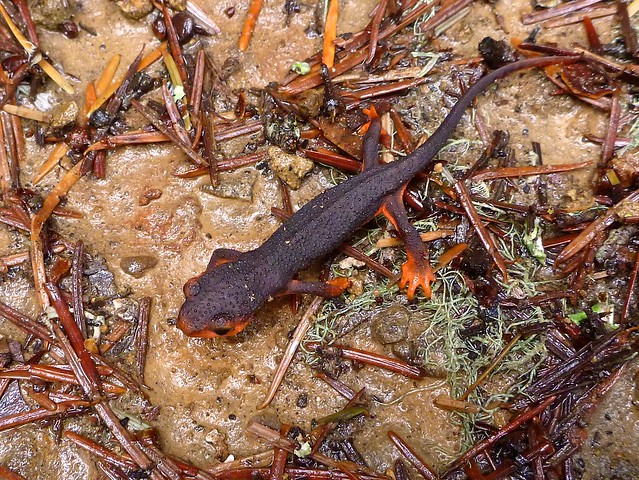 "Was it left at the lichen clump or right?"

And breeding in the creek, laying their eggs, and going about their long, 20+ year lives. 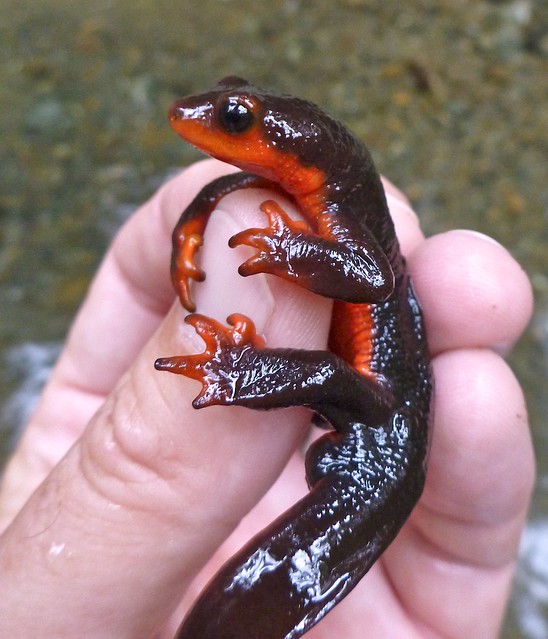 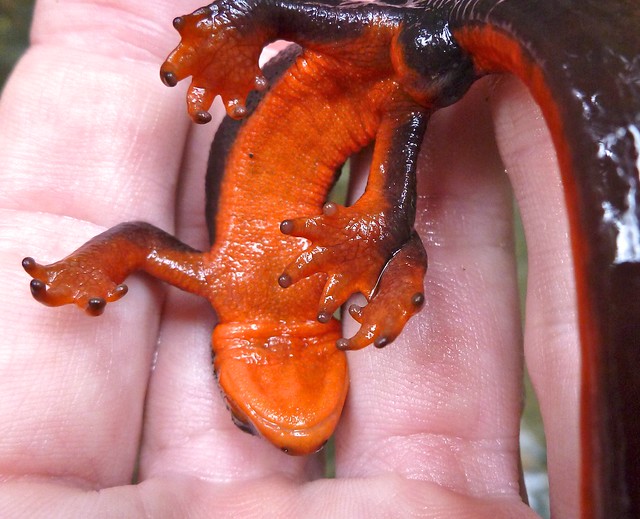 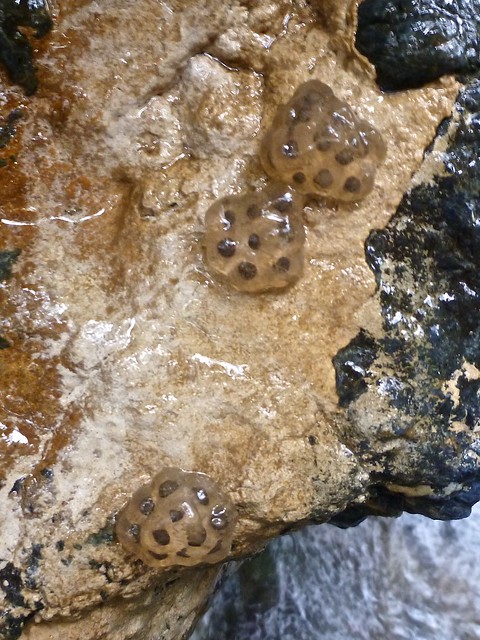 Which tells us they were born in the same creek, since red-bellied newts are "strongly philopatric" and always return to their birth place - their "home creek" - to breed.

Some were a bit shy about letting us try to determine their sex... 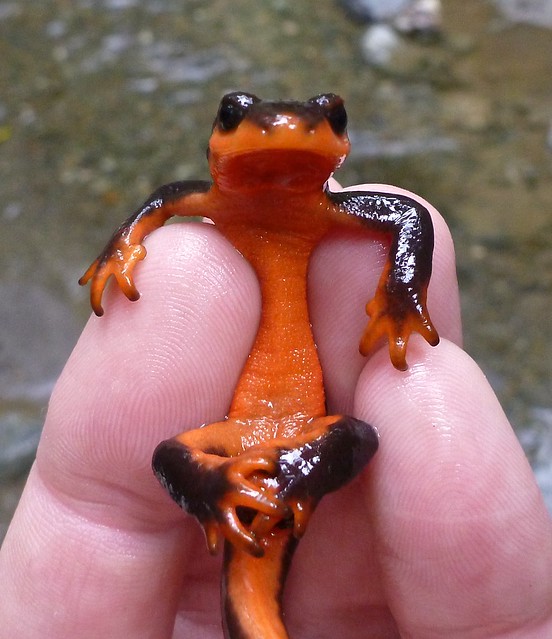 Others - not so much. 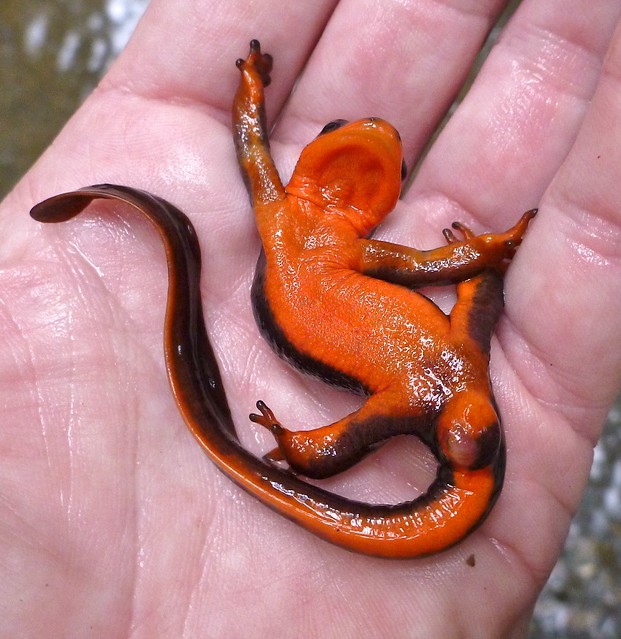 We've seen a full range of sizes/ages, from sub-adults to large adults, and as many as 48 individuals in just a few hours of walking our routes. 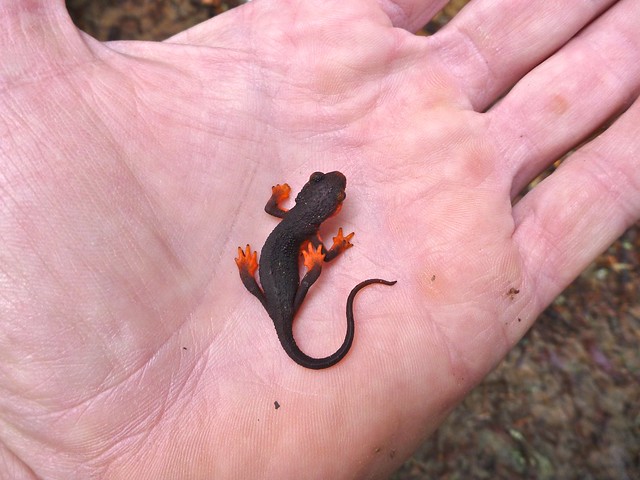 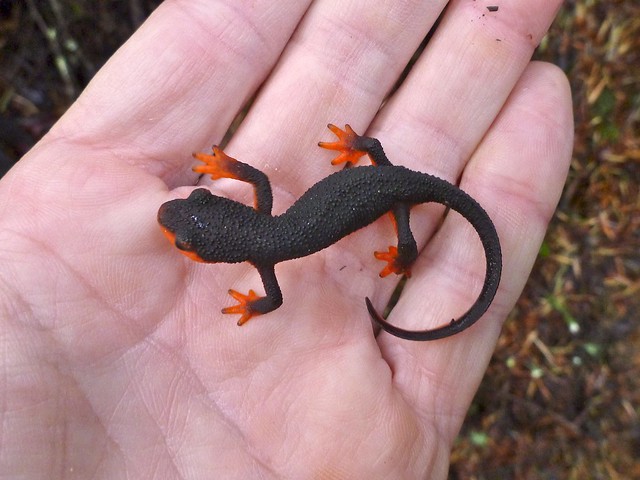 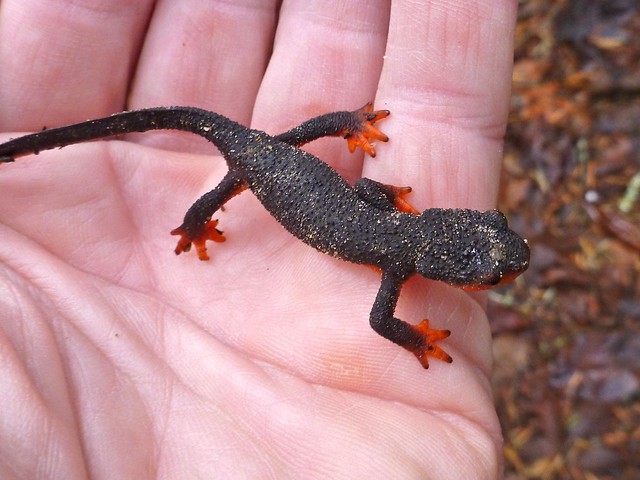 And every one of them acted like a Santa Cruz Mountains local.

They even knew how to properly pronounce Duarte's.

So - a natural population, or introduced?

Without a smoking DNA-gun, which so far has eluded researchers, it's not an easy call. While separated by 80 miles and a Bay, the Santa Cruz Mountains and core Taricha rivularis range in Sonoma and Mendocino share mostly commonalities, and no major red-belly preventing differences.

A similar geology, for example, including the San Andreas Fault, which runs north along the Santa Cruz Mountains and through the red-belly range in Sonoma/Mendo, exposing the fault-churned Franciscan Complex of sandstone, basalt, shale, chert, schist, and serpentinite on the way.

And it's not uncommon for amphibians to have ties to faults, contact zones, soil and stone types, since they affect sub-surface structure and hydrology, and thus skin moisture management ("osmoregulation") when estivating underground over hot, dry California summers.

In fact, numerous plant species jump the San Francisco Bay to form broken and disjunct ranges in the Santa Cruz Mountains. Almost 200 plant taxa reach their southern limit, and many are relic species (paleo-endemics) with ranges retreating north from a time when California was wetter, and newt-friendly forests much more contiguous and connected all around the Bay.

Along with the well known Coast Redwood, the Douglas Fir, Pseudostuga menziesii, is such a species. It barely ranges south past the Santa Cruz Mountains, with just a trickle of trees in Monterey County. And Doug Fir, Bigleaf Maple, Acer macrophyllum, and Madrone, Arbutus menziesii, which is another Bay jumper, are a dominant tree trio in the red-bellied newt ranges - both in Sonoma/Mendo, and in the Santa Cruz Mountains. 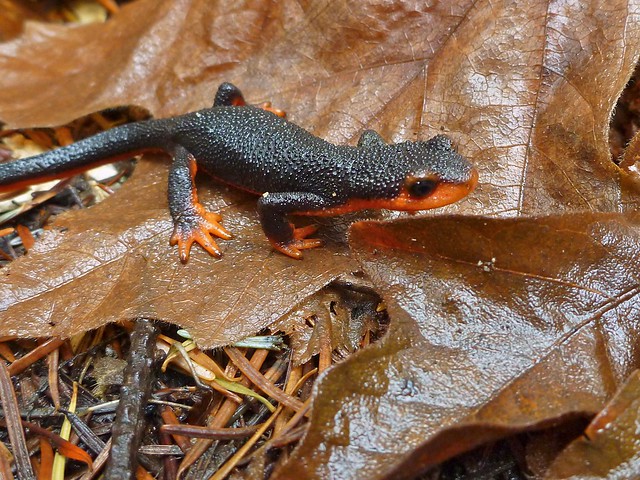 Other endemic relic trees, such as California Nutmeg, Torreya californica, make the hop to end their current range in the Santa Cruz Mountains. And shrubs, such as Whitestem Raspberry, Rubus leucodermis, and Red Huckleberry, Vaccinium parvifolium, both "mimic" the red-belly newt range and make the full disjunct leap - the next nearest populations north from the SC Mtns are in Sonoma County, where the 2 shrub species begin the main part of their distribution.

And most relevant, as mentioned by Doc Wake's team of salamander commandos in their Journal of Herpetology paper, other unique amphibs in the Santa Cruz Mountains have brethren across the Bay: the California Giant Salamander, Dicamptodon ensatus, the Santa Cruz Black Salamander, Aneides flavipunctatus niger, and the Santa Cruz Long-Toed Salamander, Ambystoma macrodactylum croceum, which is disjunct all the way to Calaveras County.

And, of course, the other two Coast Range newt species, California and Rough-skinned, Taricha torosa and granulosa, make the Bay jump, with rough-skinned also reaching its southern limit in the Santa Cruz Mountains. Even more wild and far-a-field - there are small, extremely disjunct populations of rough-skinned newts in Idaho and Montana that are thought introduced, but similar DNA studies have also proven inconclusive, leaving open the possibility they too are native.

So, perhaps the red-bellied newt range was once contiguous in the Coast Ranges from Humboldt to Monterey, but is also in retreat, and the Stevens Creek population a remnant.

But of course, these many commonalities in habitat and geology might be noticed by someone smart looking for a place to introduce the species to the Santa Cruz Mountains, too. 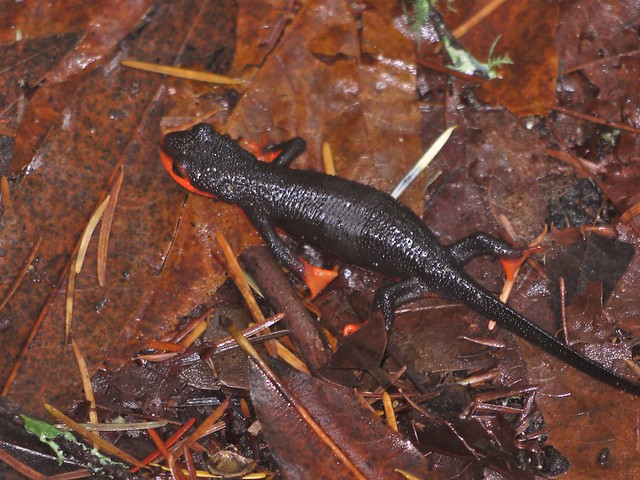 "Oh, the weather outside is frightful, but I am soooo delightful…"

My brain says "probably introduced." It seems too incredible to me that red-bellies would never have been documented in well over 100 years of surveys and wandering in the Santa Cruz Mountains by numerous naturalists and biologists, including students and researchers from all the big Bay Area universities that offer bio sciences - SFSU, UC Berkeley, UC Santa Cruz, San Jose State, and Stanford, where, as Cindy covers, the great embryologist and newt researcher Dr. Victor Twitty was chair of the biological sciences department.

But while my brain is trying to be rational, my heart is screaming "OMG! Sooo cool! All 3 newts in the Santa Cruz Mountains!"

So I guess my heart is inclined to agree with Sean, Daniel, Michelle and Doc Wake of UC Berkeley.

If even just to help protect the species.