Brachylagus idahoensis, which translates roughly to "the little hare from Idaho," was originally classified in the genus Sylvilagus - the "woodland hares," which includes the brush, mountain and desert cottontail rabbits well known to us residents of the American West.

And, of course, we have true Lepus hares too - the jackrabbits and snowshoe.

But the pygmy rabbit's unique habit of digging its own burrow complexes and colonies finally compelled the gods of Taxonomy to give them the monotypic nod, and they were split off to be the lone species of the genus Brachylagus.

Thus, the ruling was: related, but also distinct, unique.

Seems quite fitting to me.

But I may be biased.

I'm also trying a bit of hare splitting on my pygmy project and have fallen for the little fellas.

And, after collecting another round of photos from the previously posted pygmy cams, I think I now have enough high-res pics to start conjecturing wildly about bunny identities.

So, here are some of the cast of characters I've been able to ID to-date.

But first, a scene refresher from the sage steppe... 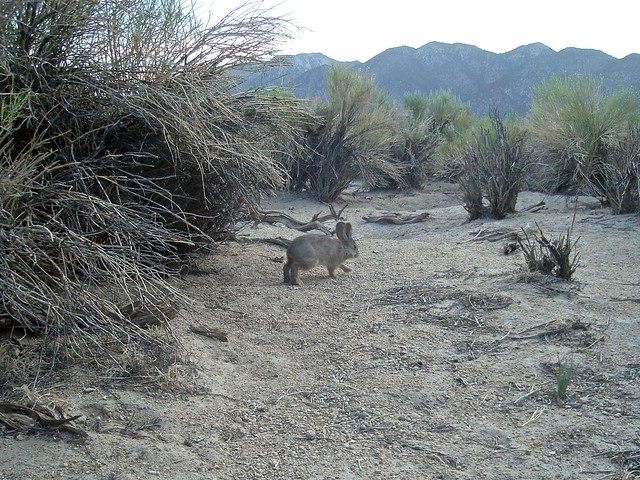 The bunny zone - there's a burrow complex under the sagebrush on the left, and another in the distance, just past the rabbit, with openings near those horizontal deadwood pieces

Lead Brachy
Lead Brachy is an adult pygmy rabbit, the main occupant of the burrow complex under the sagebrush to the left, and the infamous "show-off in the snow" from my first pygmy post.

Not sure about gender yet. In rabbits females tend to be larger than males, so my gestalt wants to lean toward younger male. And females can also disappear in burrows for a while during bunny-rearing, so I want to see more photos for longer chunks of time. 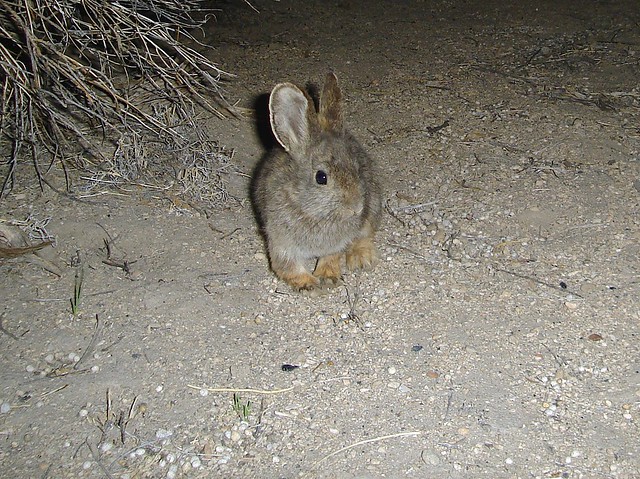 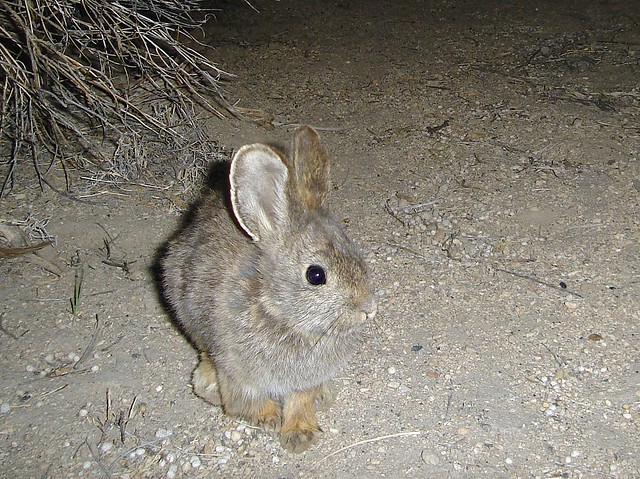 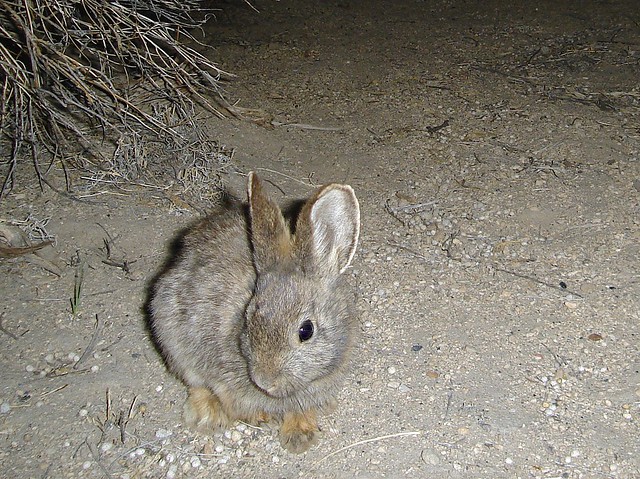 Note the small notches and nicks along the edges of the ears. Those are quite useful for ID, especially with the highest resolution versions of the photos and comparative crops. 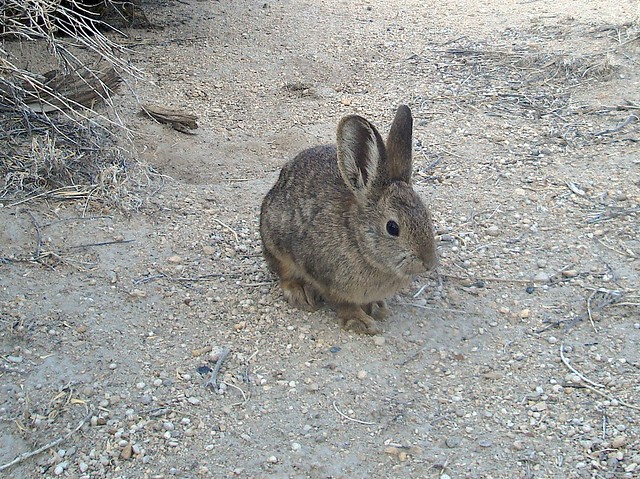 Sub-adult Brachy
This sub-adult bunny visited the area multiple times. Slightly smaller, and with "fresher" ear edges (few nicks and notches), it's definitely a different rabbit, but may be related to our Lead Brachy. 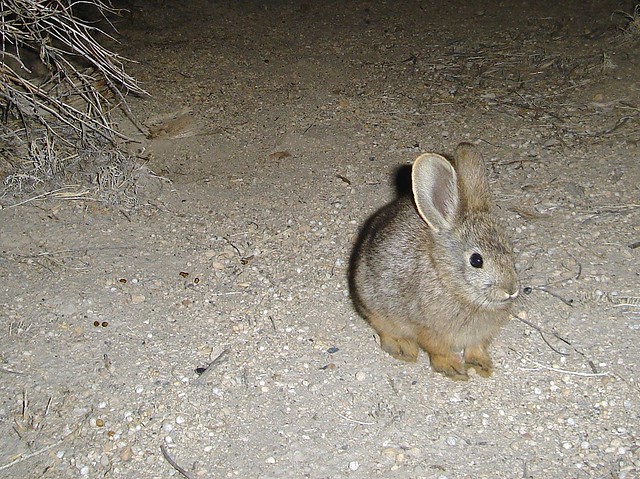 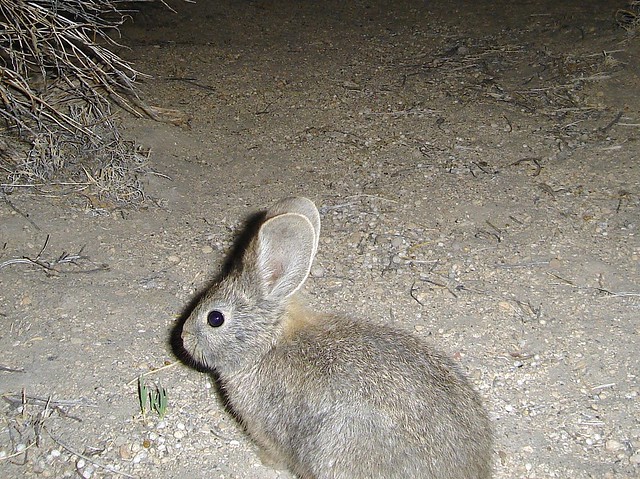 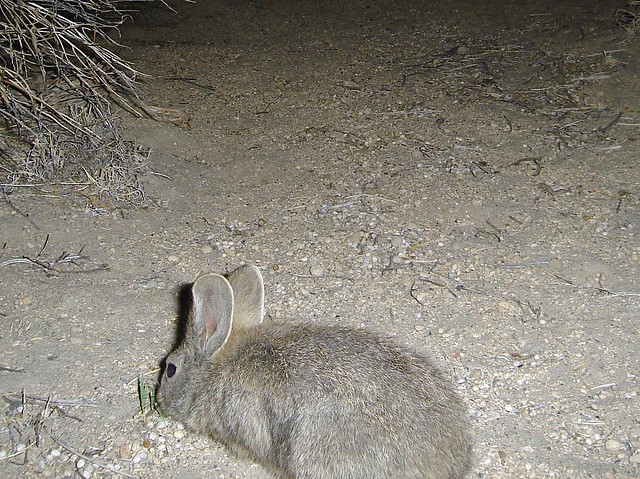 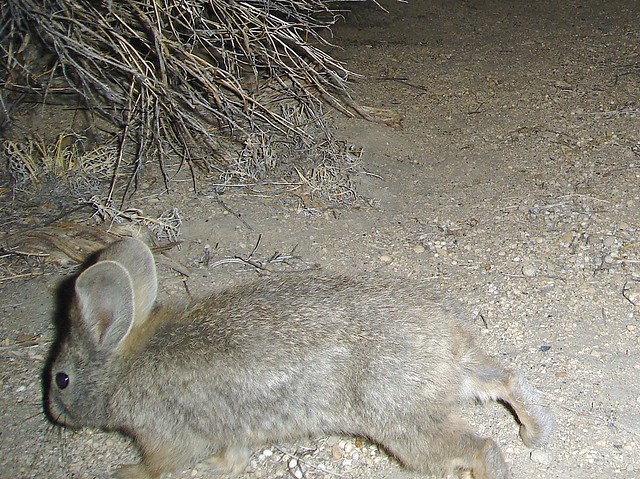 Juvie Brachy, aka Fuzzy-Wuzzie Wabbit!
An even younger and smaller juvienile pygmy rabbit hopped through a few times as well. It and Sub-adult Brachy may indicate 2 breeding cycles this season so far, since localized females tend to synchronize. But us humans also tend to way over-generalize animals, too. Probably just 2 different nearby pygmy rabbit moms in the 'hood. 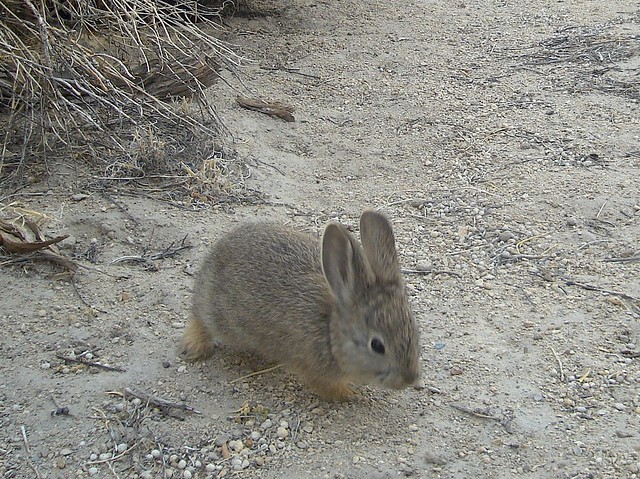 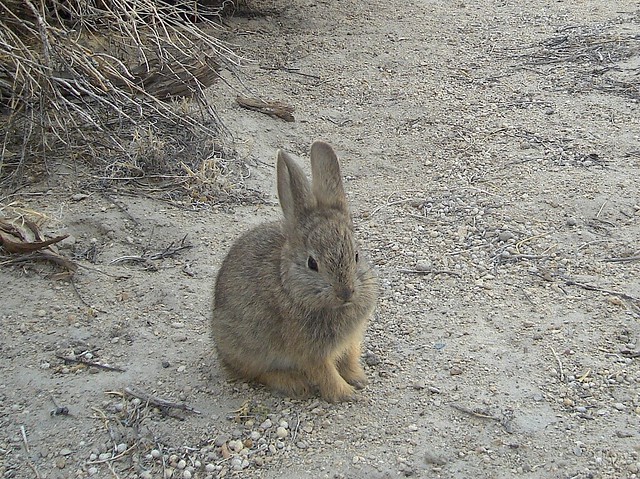 Man is that cute.

And Notch-Ear
This adult rabbit with a distinct tear/notch in the left ear visited several times. Mostly just sniffing around, it seemed. Looking for forage, fertile females, or rival males? Or, a neighboring female dropping by for a cuppa? (pygmy rabbits are social) 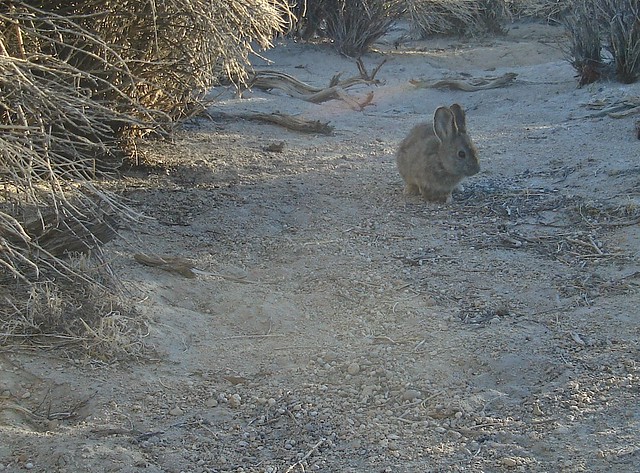 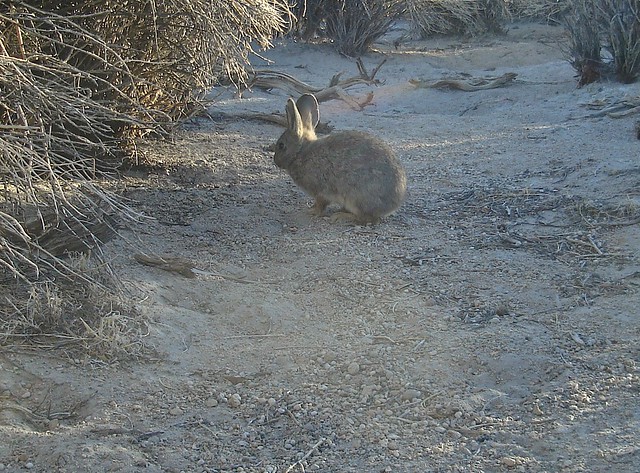 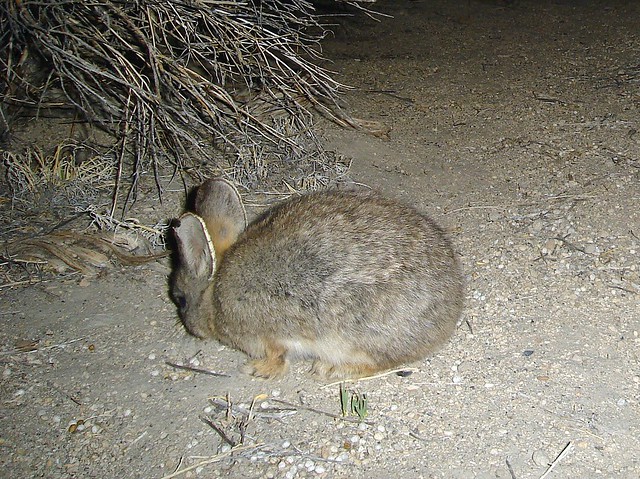 But the cam never caught any interactions between Notch-Ear and our Lead Brachy, who was often hanging around and acting vigilant. Especially during the bunny hours - dawn and dusk.

As every proper pygmy should. 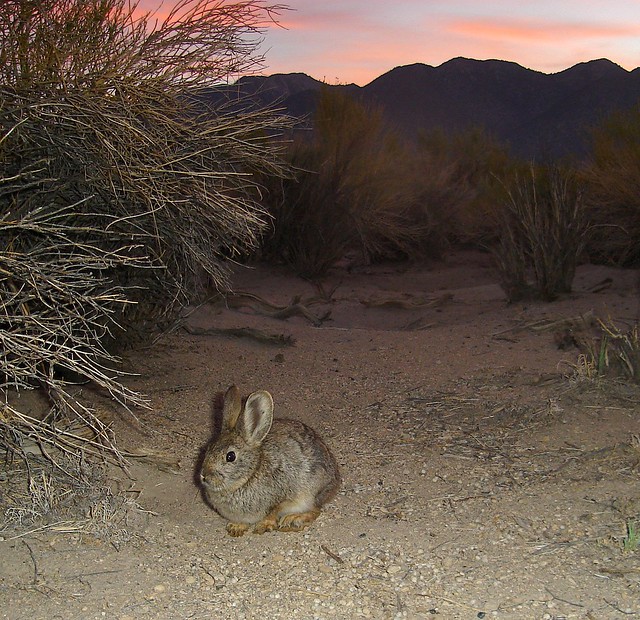 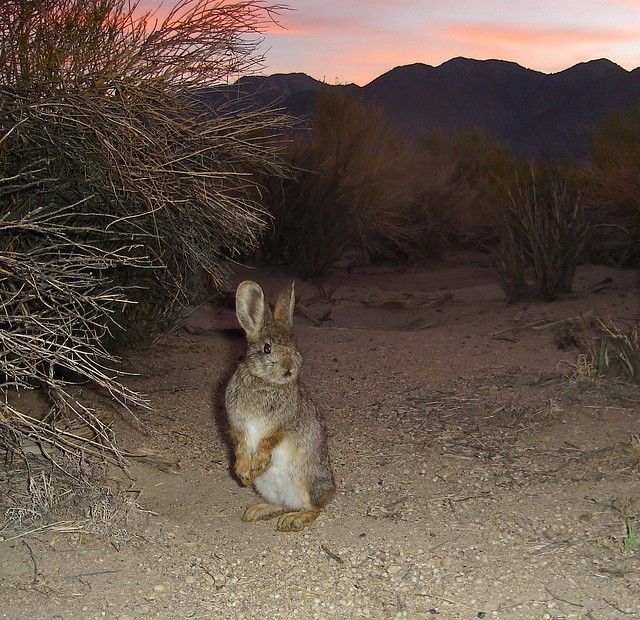 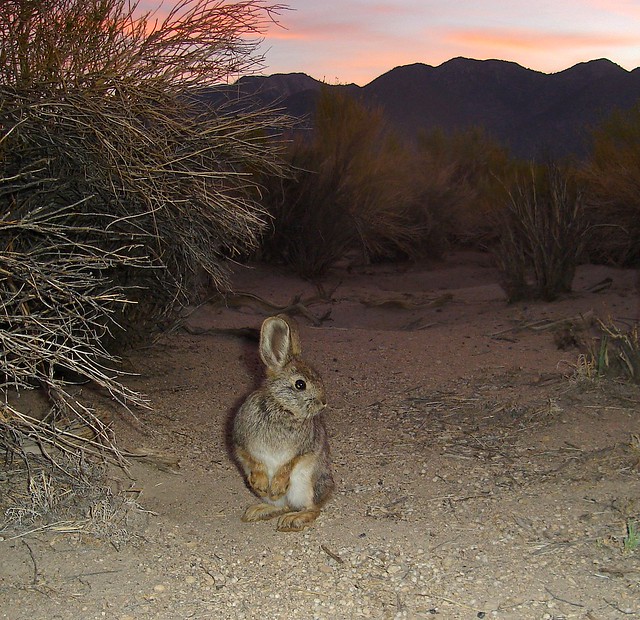 That makes four pretty-positive pygmy IDs so far. I look forward to seeing if more bunny faces make repeat and recognizable appearances to our rabbit show.

Of course, this is nature, so along with the pygmies there were also other "supporting characters" that crashed the scene. We'll cover them next.