Let There Be Lions

I was recently catching up with a friend who, like me, spends a lot of time haunting parks and preserves in the Santa Cruz Mountains. While chatting, he mentioned he'd read that local biologists estimate there are 70-80 cougars living in the mountains.

And there are deer. LOTS of deer.

So, of course there are lions. They're out there doing their job - roaming their huge home ranges, keeping the deer on the move, whacking the weak, and avoiding us at all costs. You have to love an apex predator with those values.

I just generally don't write about them because I worry they'll get too sensationalized. But perhaps it's better if they are seen more often. Maybe it'll help people understand that they really are around, and they really aren't a threat.

So, in that vein, here's a Santa Cruz Mountains lion story for you. It's about a cougar mom and her cub that I've been sporadically catching on cams for about 8 months.

One of the earliest photo series was a bit in your face, as the mom decided to give the cam trap a serious up-close inspection: 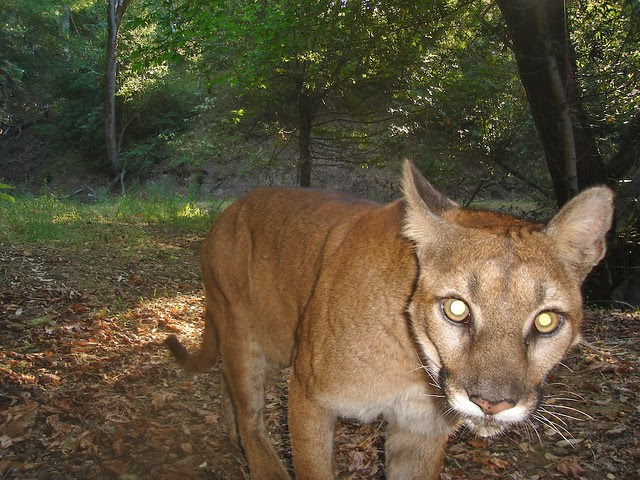 Great "what the heck?" look, huh? She obviously wasn't expecting the camera to wake up. The surprise is probably more from the "whirring" noise than the ensuing flash.

Note the nose dots, ear notches, whisker pattern, high cheekbones and skinny tail. All are features we use to ID the mom and differentiate other lions. In the full high-res, of course. 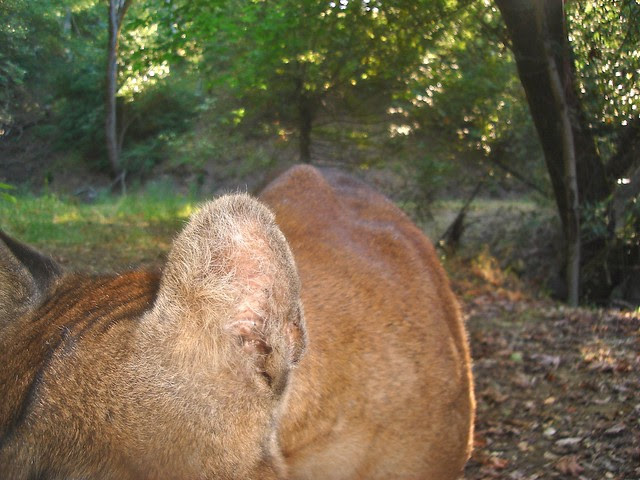 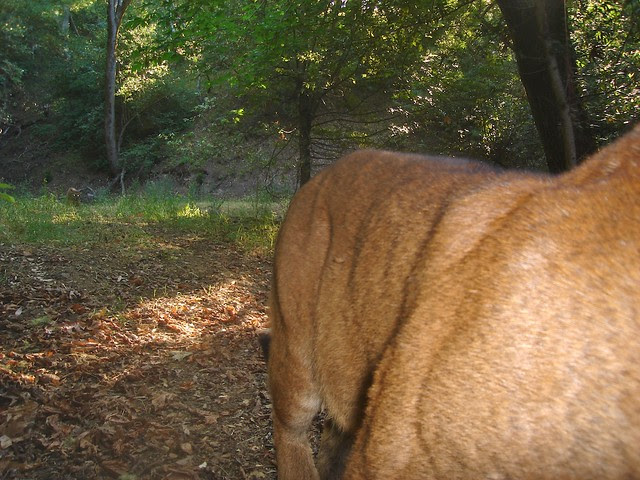 As mom was checking the cam, her cub was hanging back, even lying down to wait before following. You can see the shine of the cub's eyes in the photos above and below. The trailing distance might be to facilitate hunting. Allows mom to slink well ahead of inexperienced youngins. 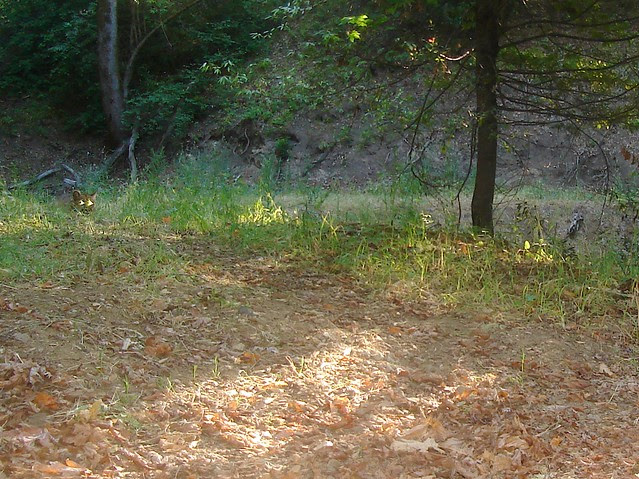 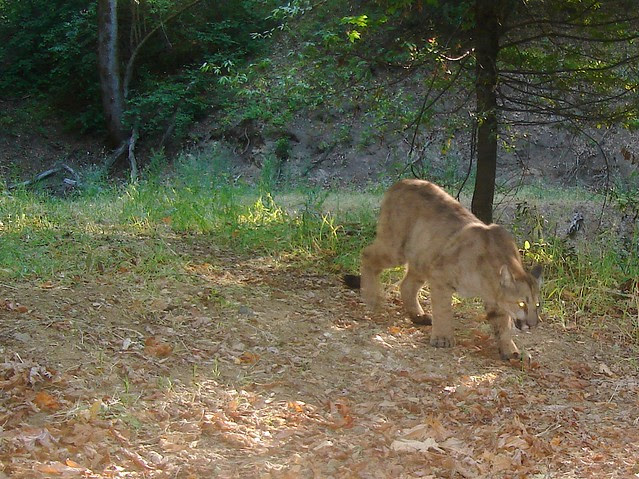 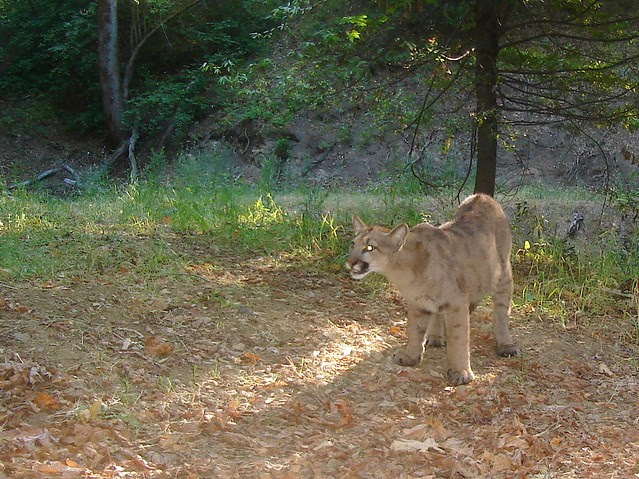 Such paws. And still somewhat spotty and fluffy. Taken 6 months ago, I think the cub is about 10 months old in these photos.

You may have noticed the mom looked a bit bony, with hollow cheeks. We're pretty sure from other photos that she originally had 2 cubs, and lost one about this time. Potentially a young mother, the toll of raising 2 cubs may have been tough on her health-wise. Once cubs get to size, it can take a deer kill every few days to support them.

We don't know what happened to the other cub, though. Perhaps hit by a car, or killed by a territorial male. But it's not likely the mom harmed the cub. Not their style once cubs reach such an age. Too much invested.

A couple months later, in summer, the cougar mom and cub passed another cam: 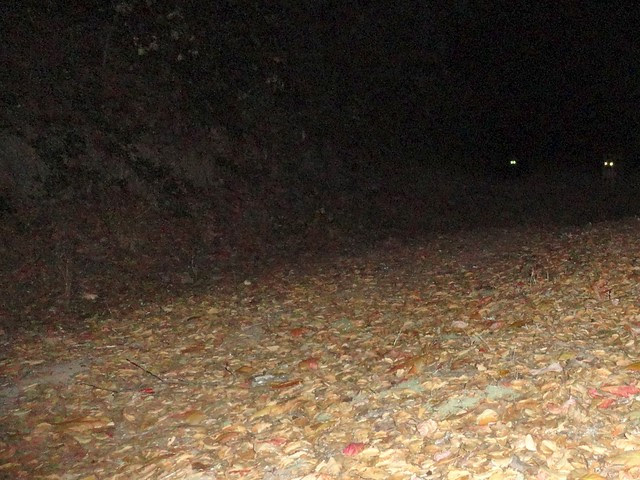 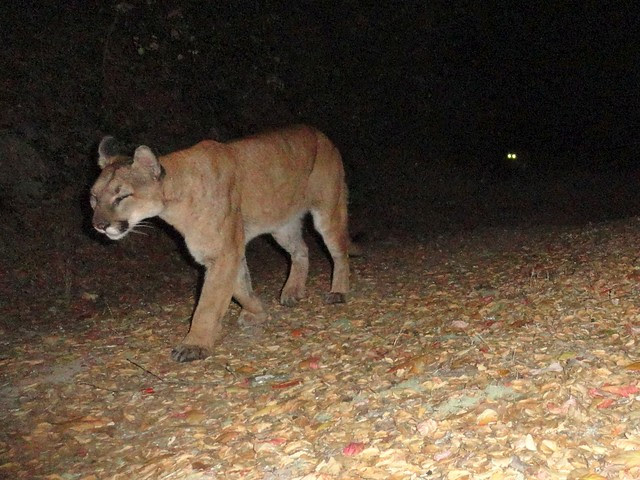 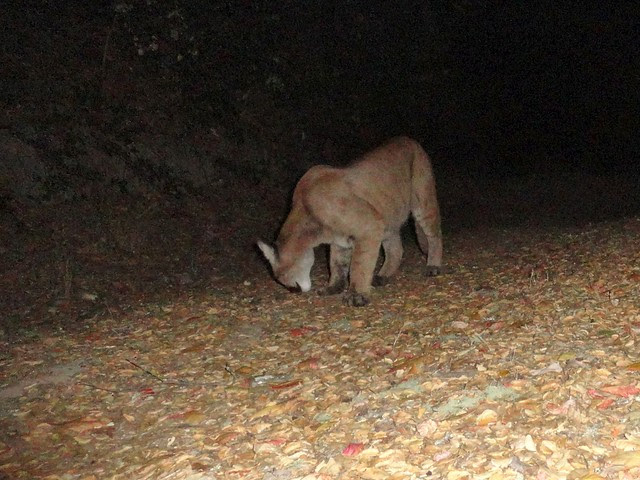 The mom was looking much healthier by then. And the cub bigger and almost spotless.

At this location there were actually 2 remote cams side-by-side, with one set to record video. And while it only grabbed 10 seconds, and didn't last long enough to fully get the cub, it's fun to see how smoothly the mom slinks by. And is completely unfazed when the other cam flashes and catches the above still photo of her squinting. :)

Just a few weeks ago, the mom and cub spent some more quality time in front of a camera. This time my super-fast Reconyx, leaving a total of 83 images of interesting behavior.

On the first visit only the mom passed the camera: 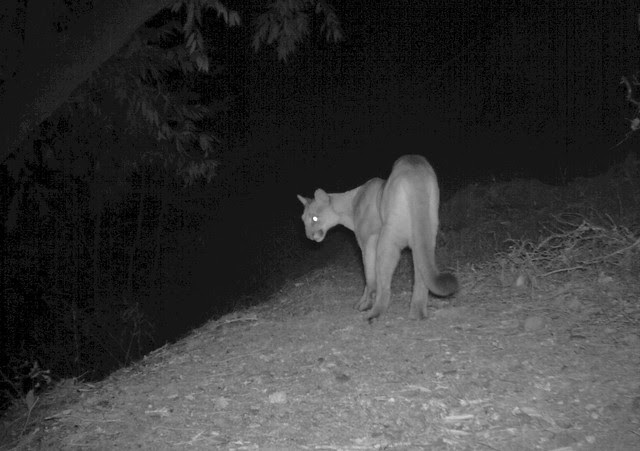 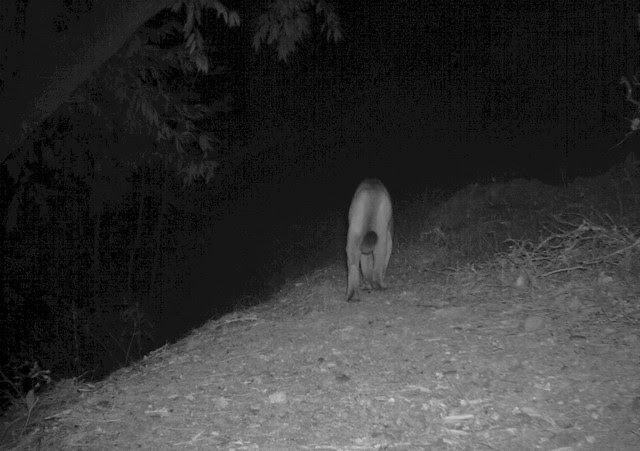 Then 9 days later, at 2 in the afternoon, the mom plopped down and watched, looked and listened for several minutes before leaving: 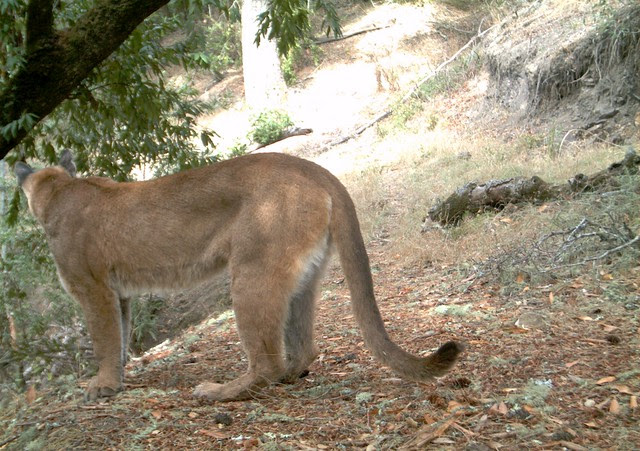 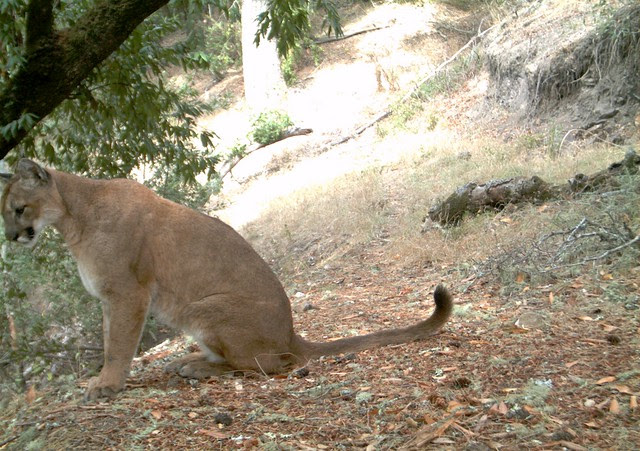 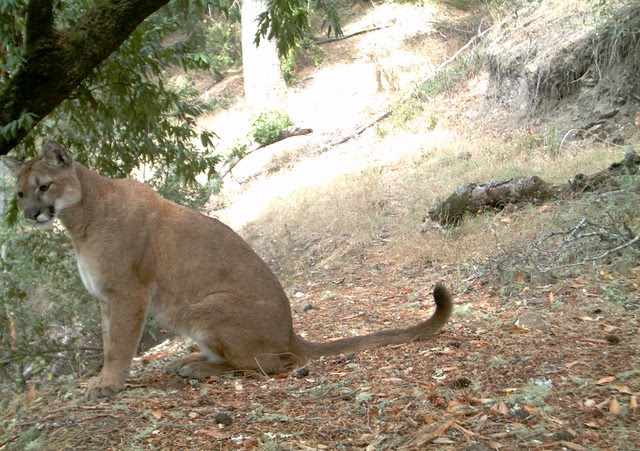 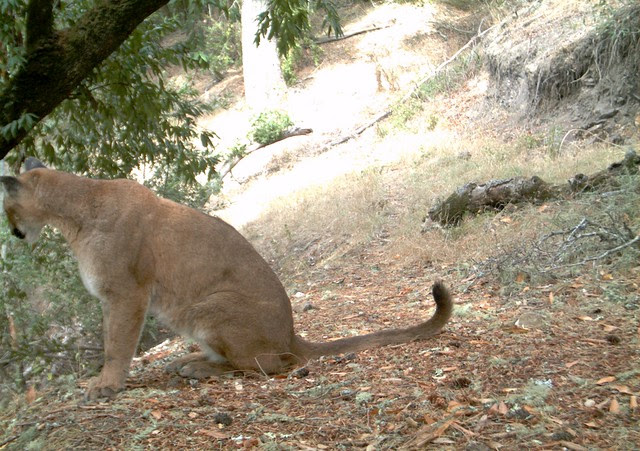 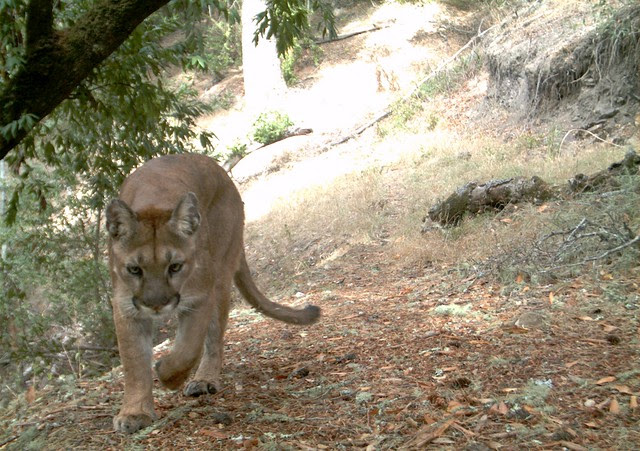 And this time the cub showed up and followed 10 minutes later: 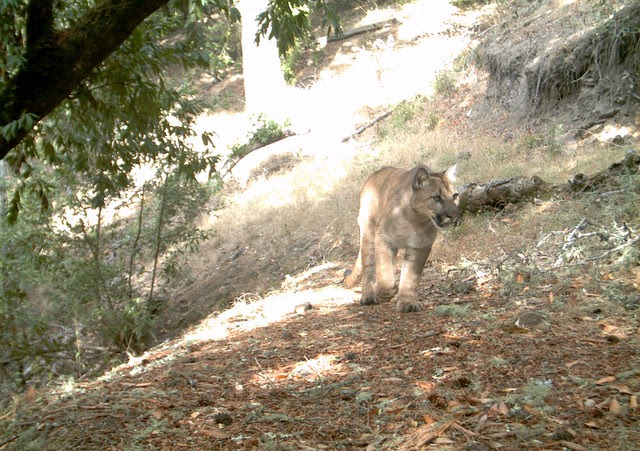 2 nights after that, the cub came and hung out in front of the camera for a full 40 photos. 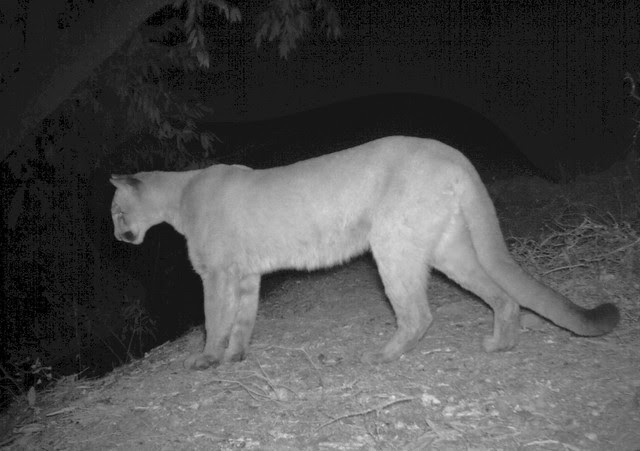 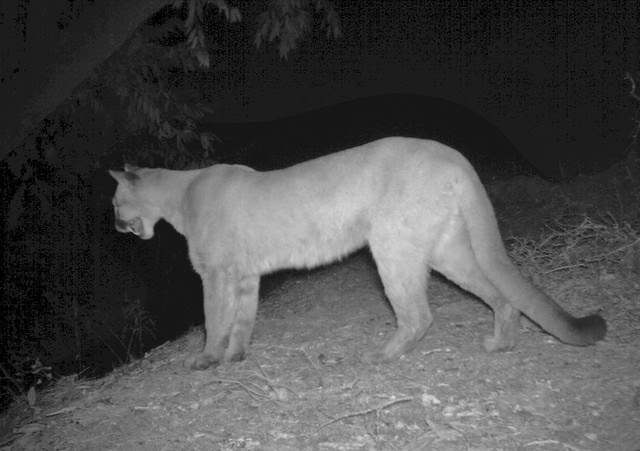 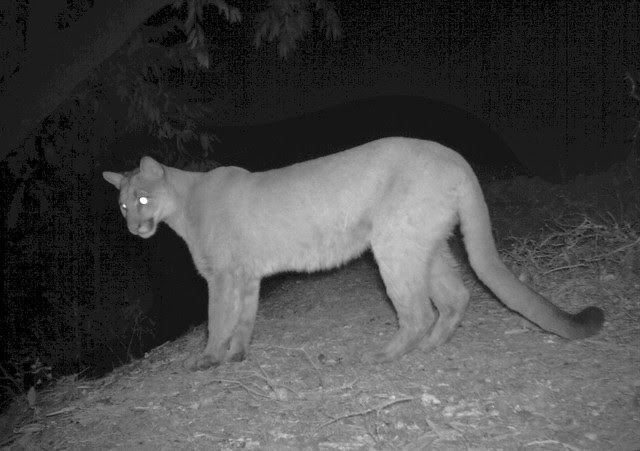 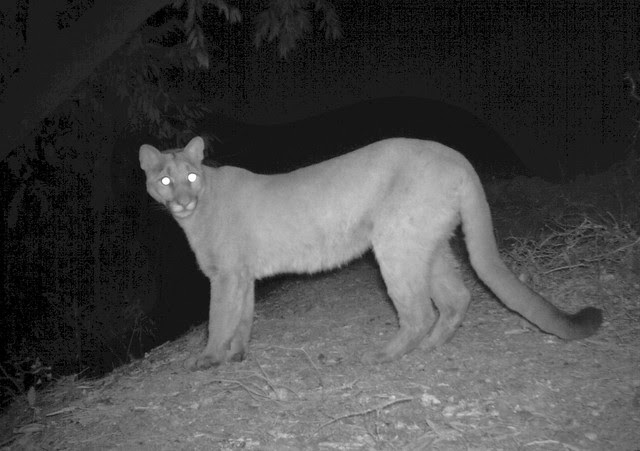 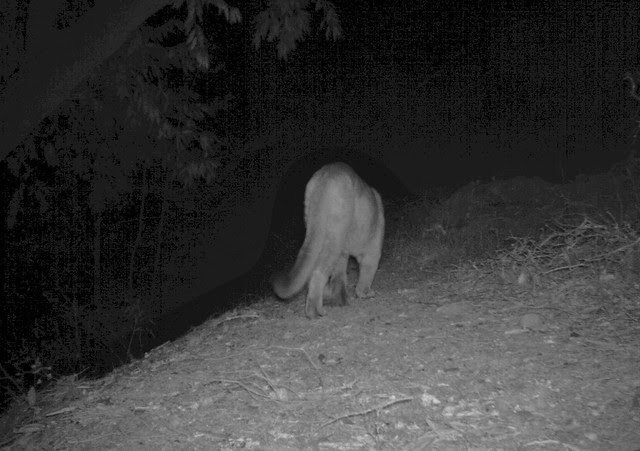 Check out that amazing tail. It's one of the best ways to recognize cougars at a distance. Just nothing else like it on the other wild animals around.

The mom wasn't caught again by the cam until the next night, and without the cub: 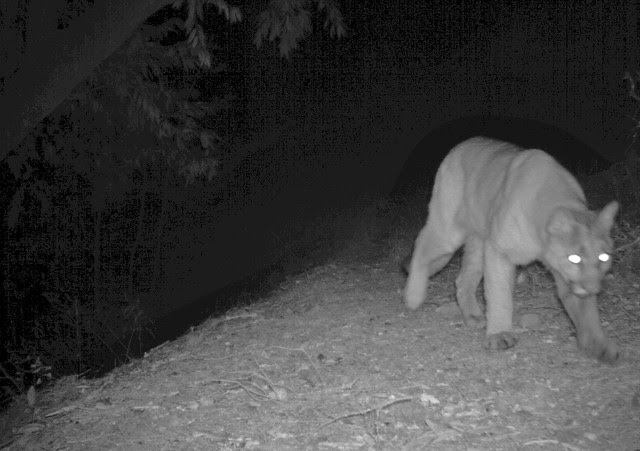 Here's a faux video made using all 83 photos of these 5 recent visits by the mom and cub:


I think the cub is about 16 months old now. Which makes me wonder if we aren't seeing the kick-off of dispersal, when the cub has to go find a territory of its own. With some cubs the mom has to give them a hint by avoiding them, or even chasing them away.

And dispersal is a high-risk time for young cougars. They have to wander off into unknown areas to find unclaimed land. Which is generally when they run into problems with humans and get stuck up in trees in backyards with barking dogs and Warden's rifles in their faces.

But a new law in CA, SB 132, has been passed to try and help out some of these lost lions. It creates leeway for CDFW to try and capture and save cougars when possible. But it is a tough problem, because relocation can become yet another risky dispersal event for the lion.

I.e., let's not fear the beasts. Let's understand, respect and protect them. They have a role to play and we can live together just fine.

Because they really are 99.9% beauties.

Some Fear-reducing Factoids to remember about lions that make it much easier to suppress worry when wandering where they range:

- they have huge home ranges - 10,000+ acres - that can take them weeks to circuit, so the chances one is near where you are, are slim.

- there are only a few ranging any given area - typically a territorial male, and a female or two with any cubs they may have during that time.

- they don't want anything to do with us, and the stats really do tell that tale - on average, a cougar-human attack occurs less than once a year in all of CA. Compare that to all the other risks, such as deer-car accidents, of which there are over a million a year in the US that kill well over a hundred people. Mostly in the east, where there are no lions to eat the dumb deer.