While I'm not often one for mantras, I certainly needed to chant a few during this little photo foray.
Because my luck of finding an Omus californicus near Mariposa quickly turned to head-pounding patience as I tried to get the little black terror to hold still for some glam shots.

But I guess you can have that kind of anti-paparazzi attitude when you're king of the inch-high-invertebrate jungle. And Omus, being cousin to the infamous Cicindelas, are truly that in their woodland habitat. They are the tigers - the death in the night - stalking, pouncing, crushing, mincing and devouring pretty much any insect their size or smaller.

Which is why Omus californicus is named the California Night-Stalking Tiger Beetle. 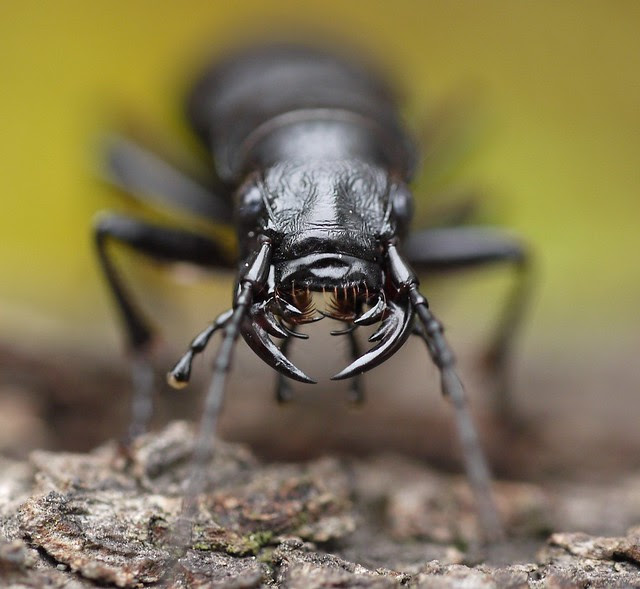 Checkity check the angle of those mandibles. Them snappers aren't for show or sparring. They're angled for grabbing and chomping down - just like a saber-toothed tiger. That angle is also a key character that defines the tiger beetles. 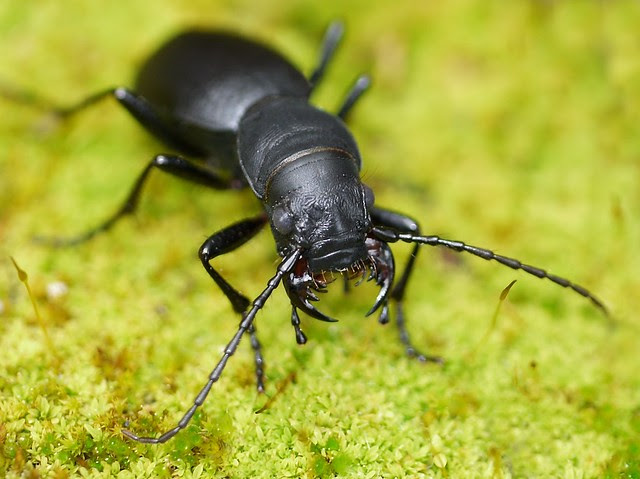 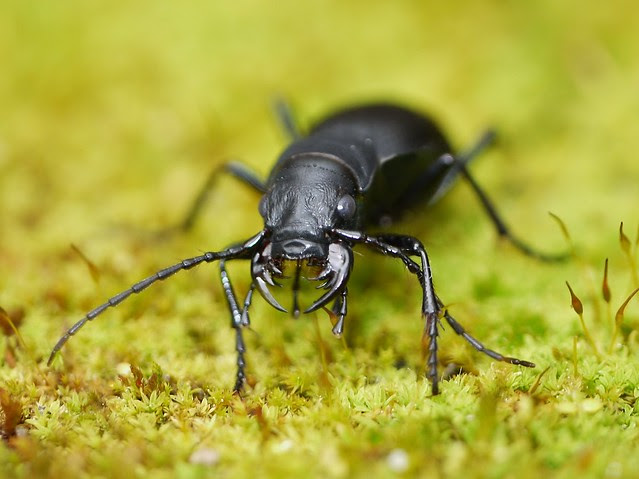 And how about those wide-set eyes, and that tippy-toe stance? They show Omus is a predator ready to run down prey. However, they're not nearly as speedy as the cheetah-like Cicindela.

Another big difference between Omus and the lightning-quick Cicindela tigers - Omus are wingless. Their elytra are fused, which definitely helped with my photo sessions. 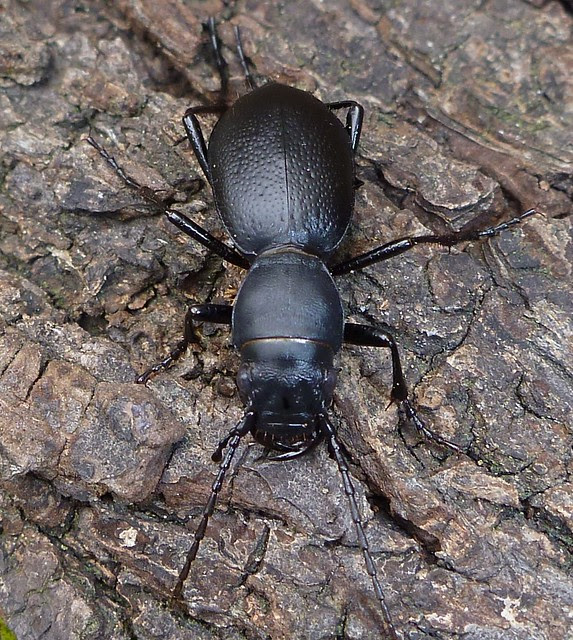 I also learned these guys are tough as nails. The typical trick for shooting small insects is to pop them into the fridge for a few to slow 'em down. Being cold-bloods, it doesn't harm, just stops them in their tracks for some fine photography. But not this ole Omus. He's a hardy beast that happily overwinters above the snowline. So even after 30 minutes in my General Electric he was still hot to trundle. And thus not yet high-q photo-friendly.

It actually took short stints in my freezer to stop him.

Poor lil guy. Made me feel like some evil prison boss.

"What we have here is a failure to communicate. Another night in the box."

But it worked. Barely. As the deep freeze would finally take, his systems would slow and he'd start to curl and fall over. It was then that I would pounce. I'd rush him to the "studio," put him down, grab my camera, get set and focused, and wait. Within mere moments he'd start to wake. And as he did, he'd stand up, align his antennae, and pause a moment to let his ganglia warm.

And thus would open my window of opportunity.

Fully awake, off he'd go into a frantic photo-defeating search for a hidey hole to sleep til night fall.
Thus it took a 1/2 dozen sessions to get these shots. And while I know he's built for freezing, it still kinda felt like I was getting all Cheney on the little dude. Hopefully he'll forgive me when he finds the fat, juicy caterpillar I put in his bucket for him. 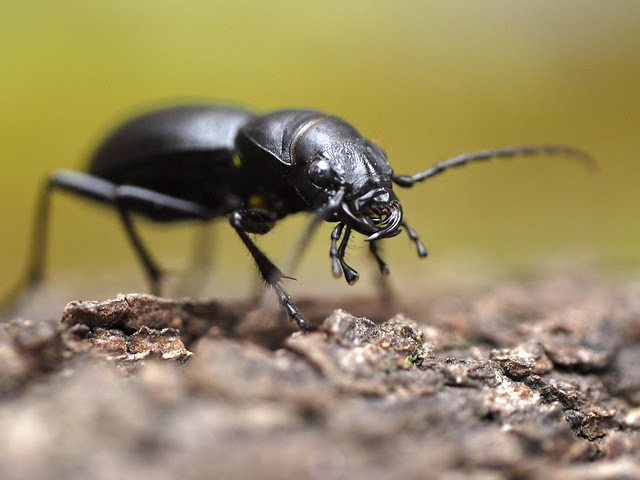 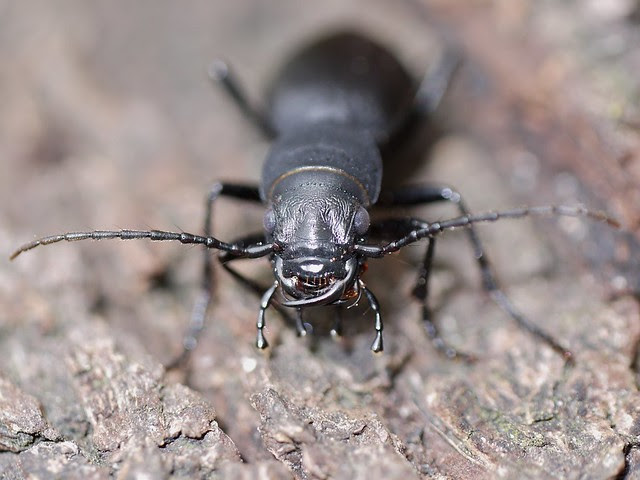 Gotta say - that dent in his "nose" is excellent. Gives him the look of a seasoned boxer. If Pixar put a voice to this character, I think it would have to be that of a flat-nosed loan shark thug... "Hey - you and me, we're gonna go over here and have a talk, ok?" Nom, nom, nom, nom, nom...

Oh - the blue-gray eyes - from the flash. That's Omus red-eye. 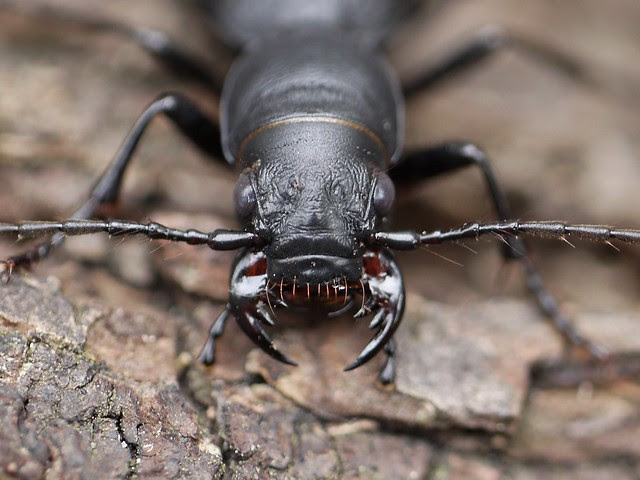 Btw - if told from the point-of-view of my tweezers, this story would be more like:

This effort was inspired by 2 amazing Entomologists - my incredible, unstoppable Ignoble Prize honored friend Doc Dave at Bunyipco, and that infamous and intrepid Missouri tiger-tamer and pro-macro photographer - Ted of Beetles in the Bush. Thanks guys (as always).

Tyger! Tyger! burning bright
In the forests of the night;
What immortal hand or eye
Could frame thy fearful symmetry?

In what distant deeps or skies
Burnt the fire of thine eyes?
On what wings dare he aspire?
What the hand dare seize the fire?

And what shoulder, & what art,
Could twist the sinews of thy heart?
And when thy heart began to beat,
What dread hand? & what dread feet?

What the hammer? what the chain,
In what furnace was thy brain?
What the anvil? what dread grasp,
Dare its deadly terrors clasp!

When the stars threw down their spears
And watered heaven with their tears;
Did he smile his work to see?
Did he who made the Lamb make thee?

Tyger! Tyger! burning bright
In the forests of the night;
What immortal hand or eye
Dare frame thy fearful symmetry?