Here they come, walking down the creek
They get the funniest looks from everyone they meet

And you dang well know they're going to monkey around - with my cameras. 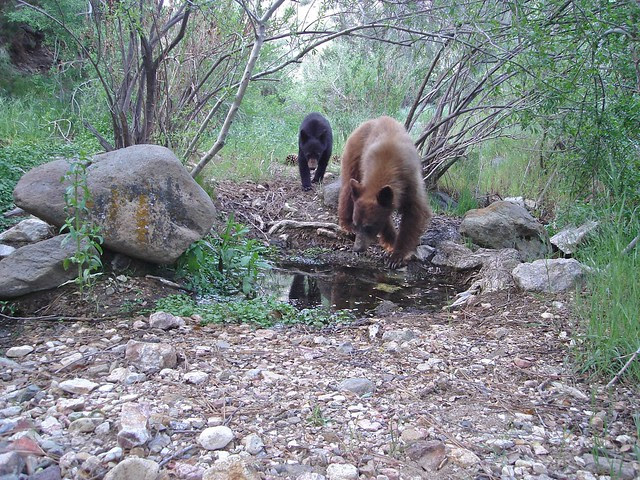 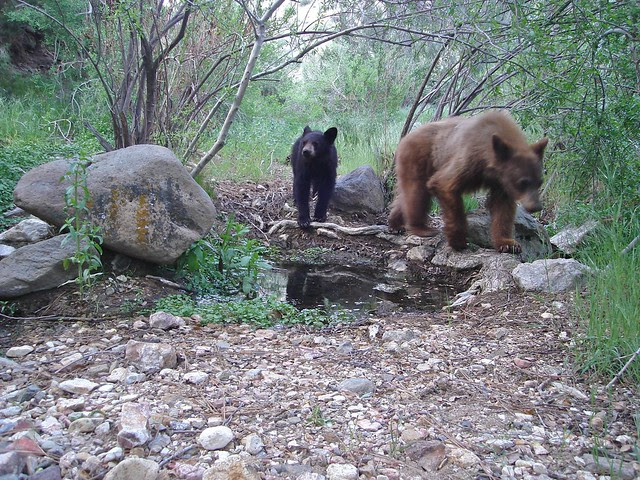 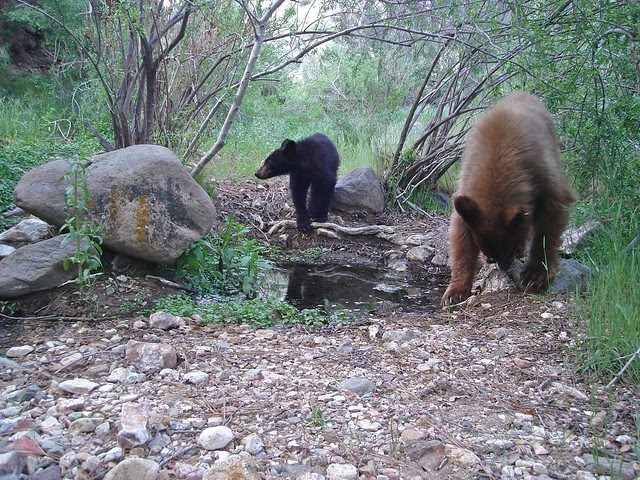 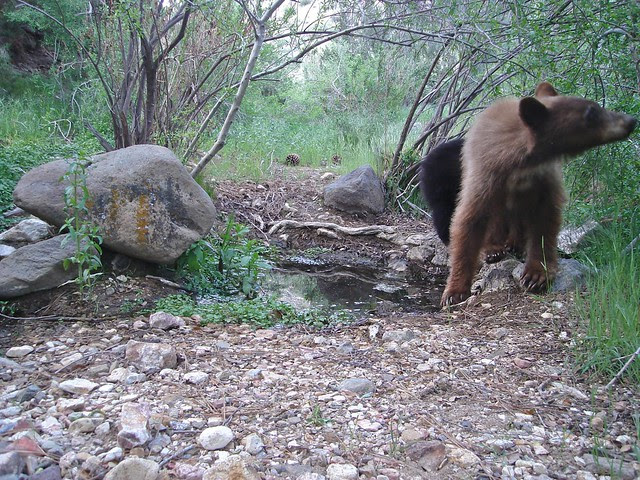 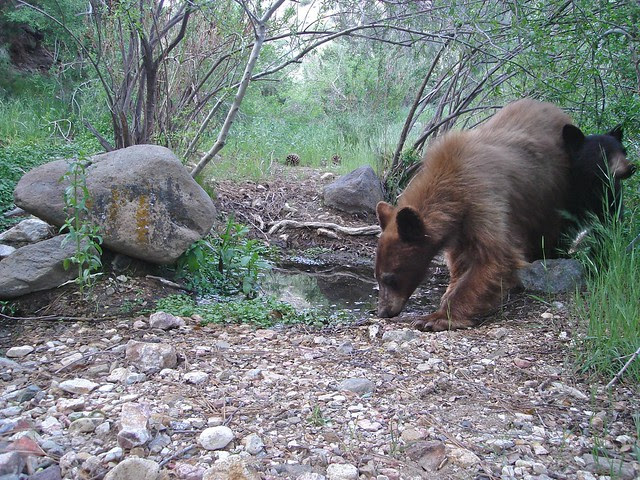 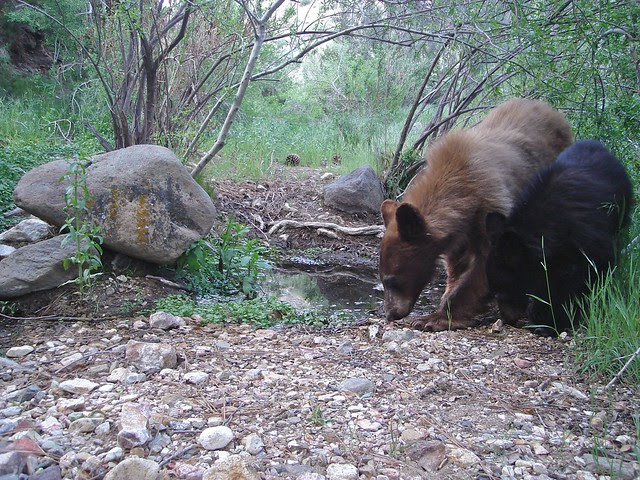 As they get close to the camera the flash kicks in. Is it auto-adjusting to the scene's reduced lighting, or a fear-response to the oncoming bears? 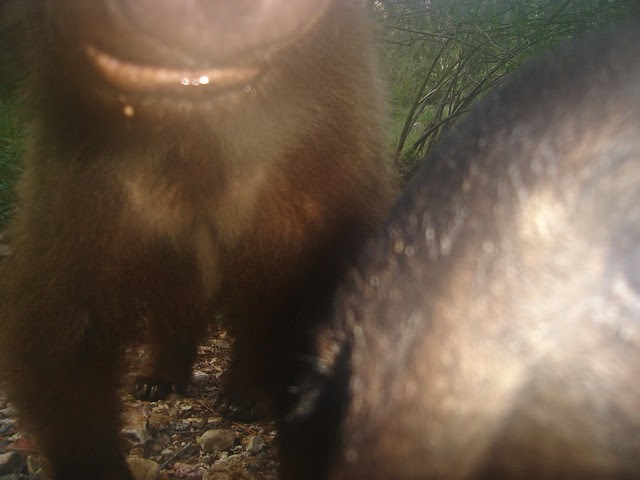 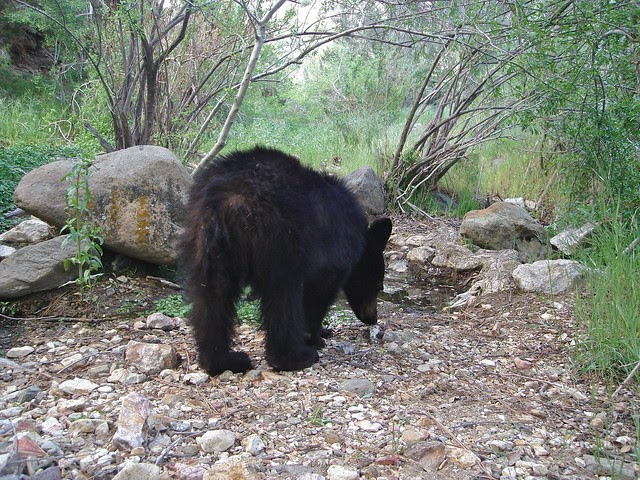 But they spared the camera for the moment, and went back to enjoying the creek. 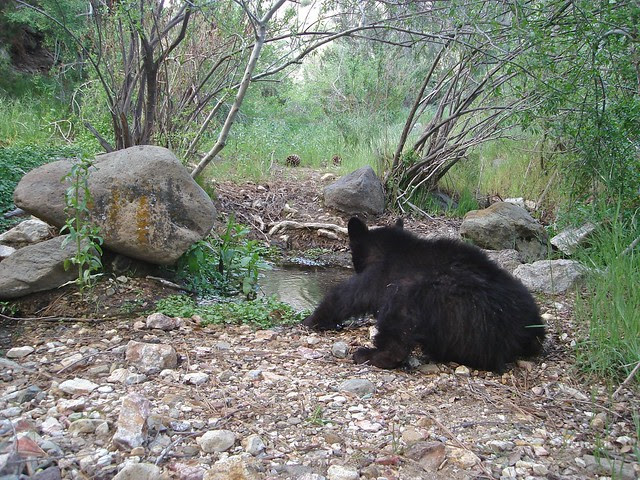 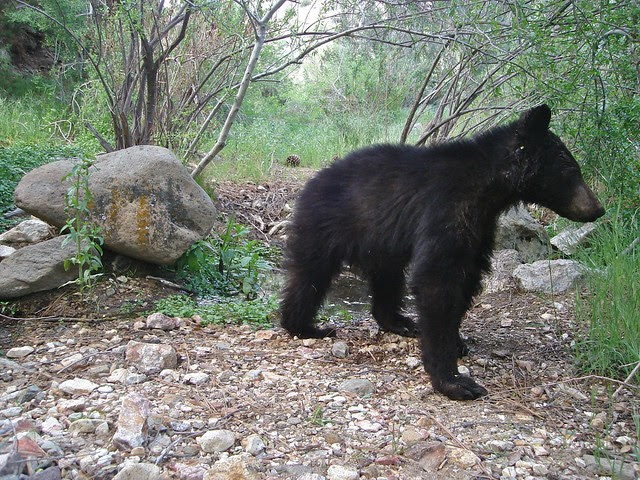 Black-black off to see what sib Brown-black is up to... 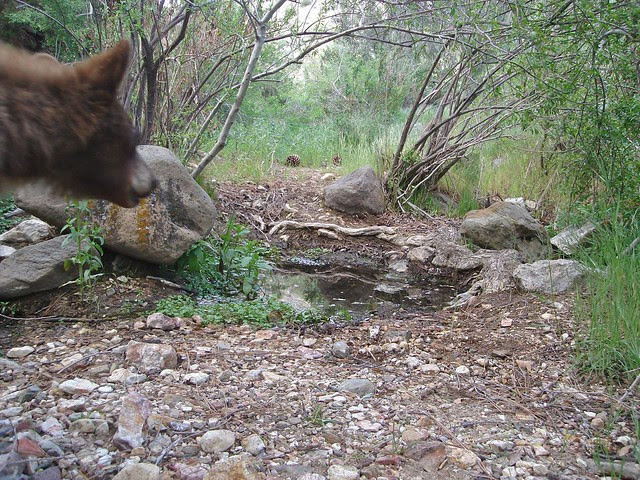 And then both come back into the scene. 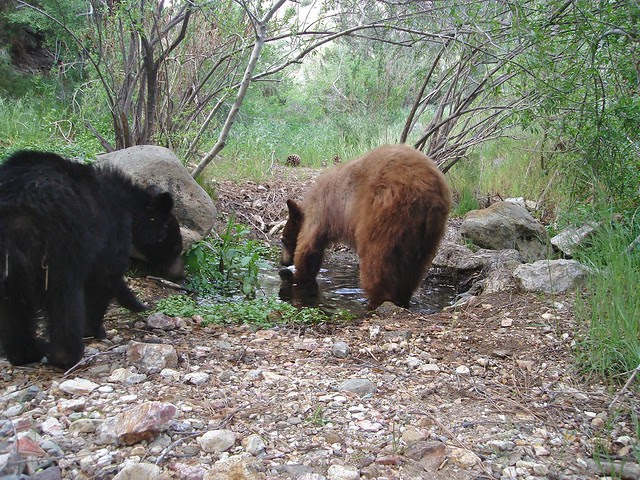 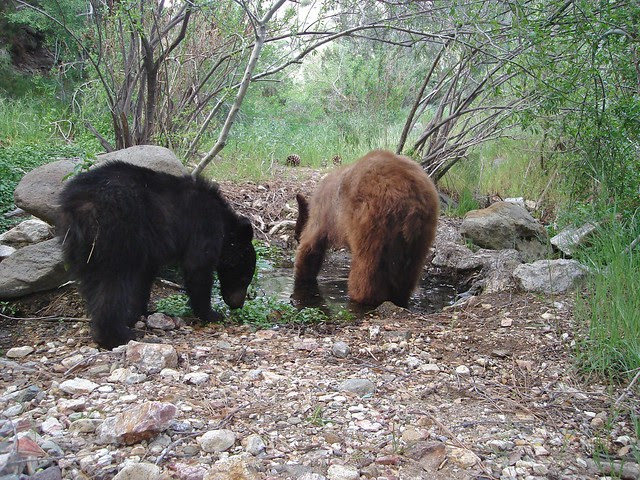 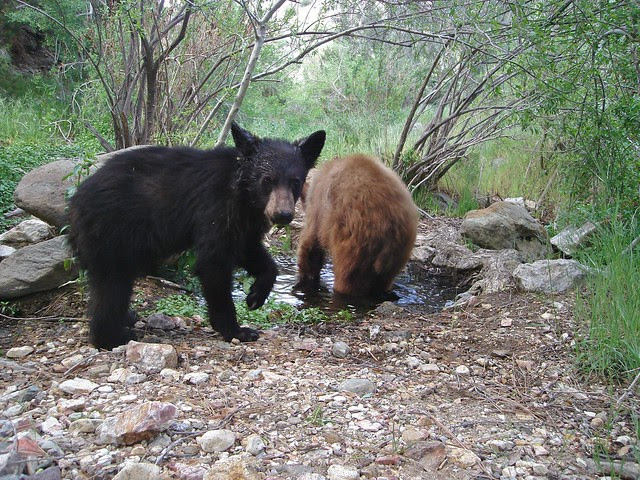 Uh oh. That's a serious look. Note the watercress in Black-black's mouth that gets dropped. 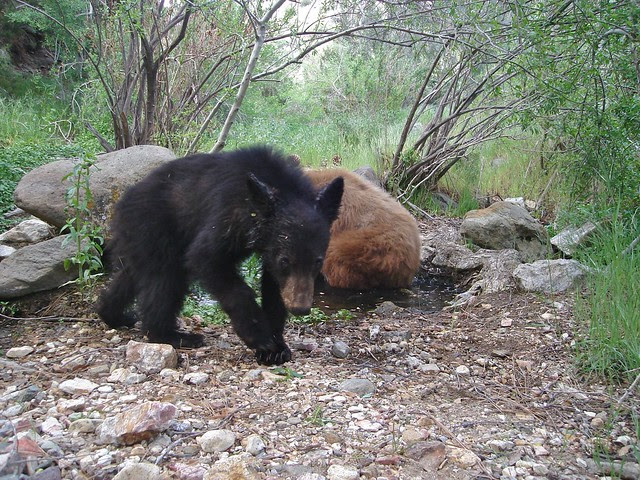 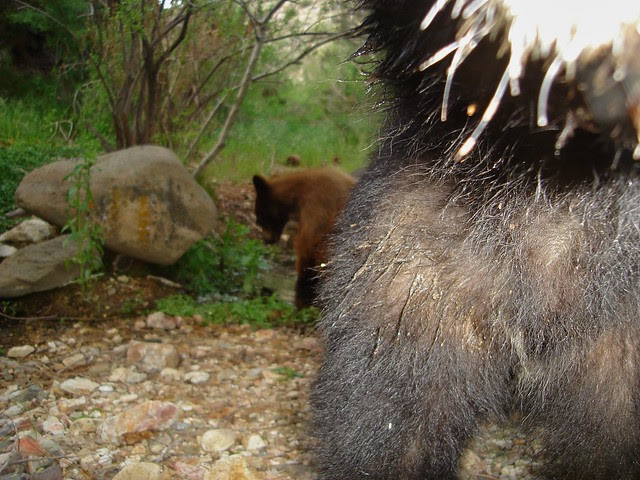 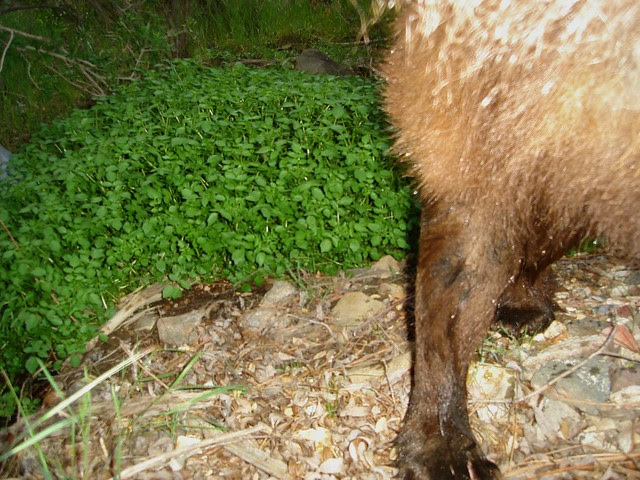 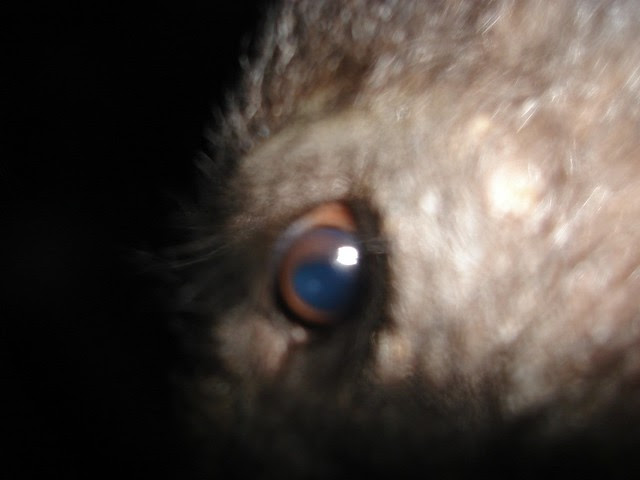 And that's all she wrote.

After that the camera only captured random shots of shrubs and cattle shins.

Bears. (to be said the way Seinfeld says "Newman.")

I have a feeling the above pair might be these 2 youngsters from a year ago: 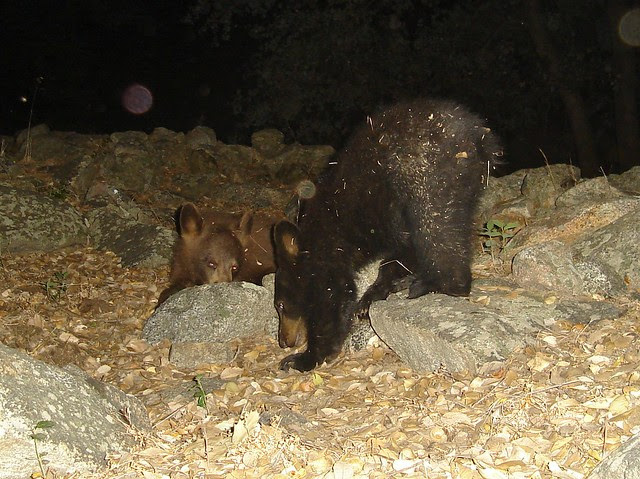 I think they'd grow about that much in a year, and their character seems similar.

Now that I've logged almost 2 years and 50 sets in the Tehachapi survey area, some other bear trends are starting to show in the data, too.

For the most part, the bears are following the snow pattern, going to ground around December 1st, and coming up for good by April 1st. But, as is common with black bears in California, they also pop up for the winter warm spells.

Cubs start meandering with Mama in July-August, and seem to disperse the following spring. The local standard is currently 1-2 cubs per Mom, with 2 most common.

As for population, I'd guesstimate there's a dozen to fifteen bears ranging the 10k+ acre region. The cams photographed 5 different cubs in 2011, with 3 mothers. Add the juvies and lone adults the cams also caught (bears showed at 50% of the sets), and it totals to 12-15ish.

The fur color ratio appears to be about 50/50 brown to black.

They all look healthy, too. No signs of mange, malnutrition or injury.

And, as evidenced - they aren't camera shy.