Living in the Sticks

Much like human homes, woodrat houses have a life to them - they're built anew, they age and decay, get damaged and renovated, handed down to kids, patched, abandoned, taken-over, redecorated and restored. Rooms are added, halls expanded, entries altered, and back stoops sometimes re-stooped. And, the roof is constantly getting tweaks - for drafts and leaks.

But at their core, all successful fuscipes houses have a strict architectural commonality: they're built like castles of yore - in-and-around a solid natural feature, that can't easily be dug out, torn apart, or burned through. E.g., a jumble of rocks, a tight cluster of trees or shrubs, a hollow log or stump, an abandoned car, an old fridge or outhouse... 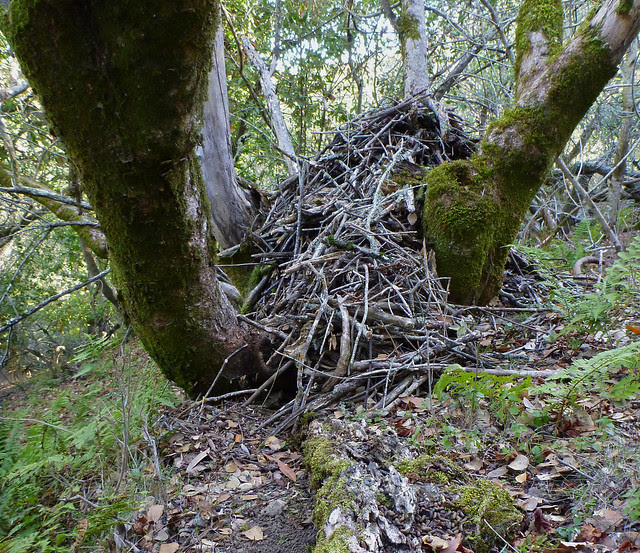 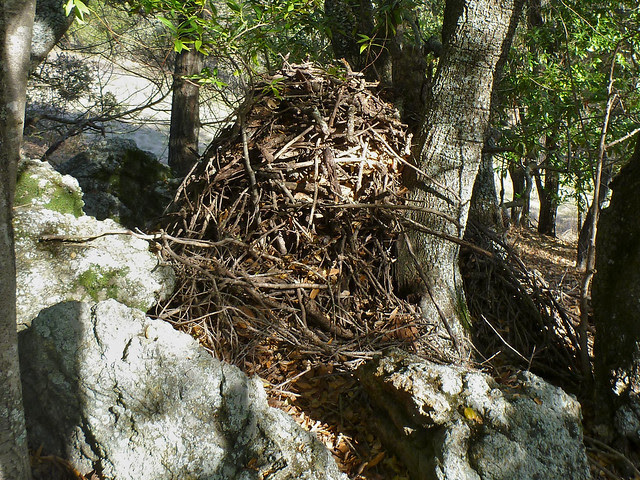 Stick house in cluster of rocks and bay laurel trees 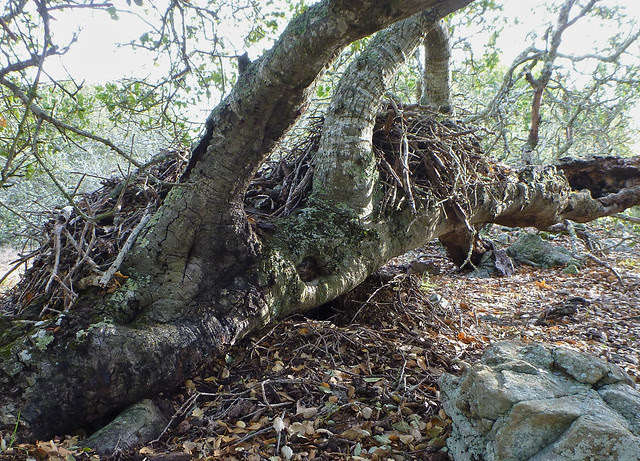 Stick house in, over and around, a hollow and downed-but-live coast live oak 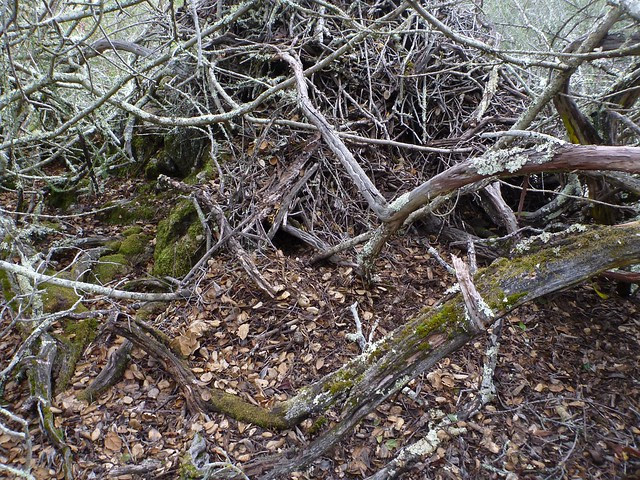 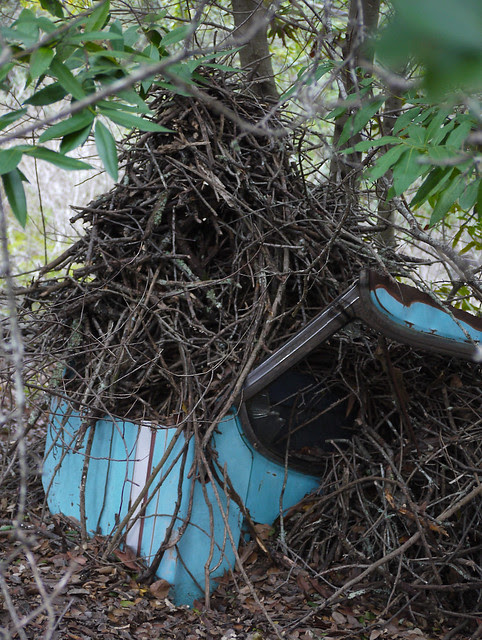 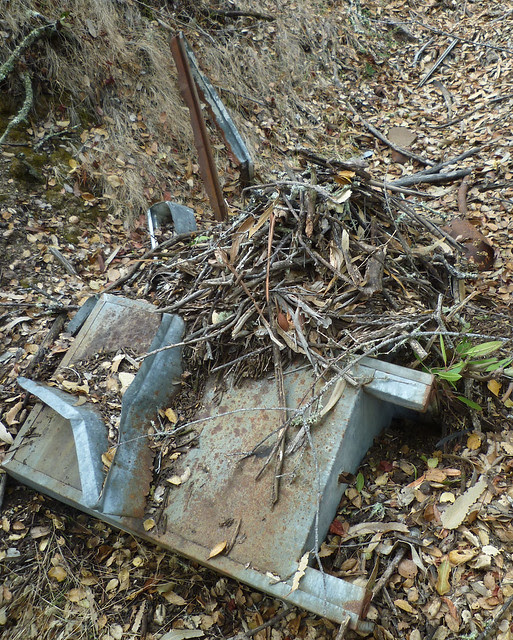 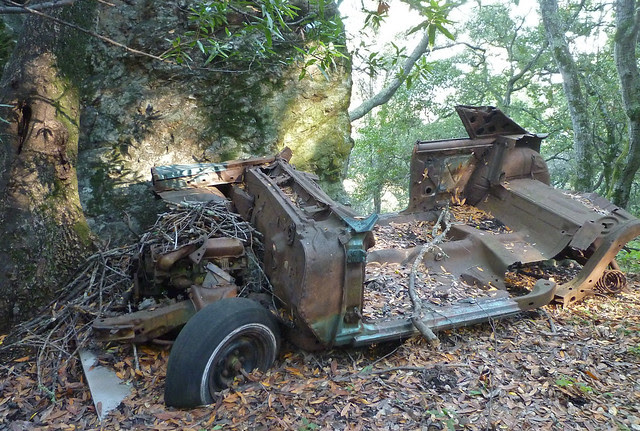 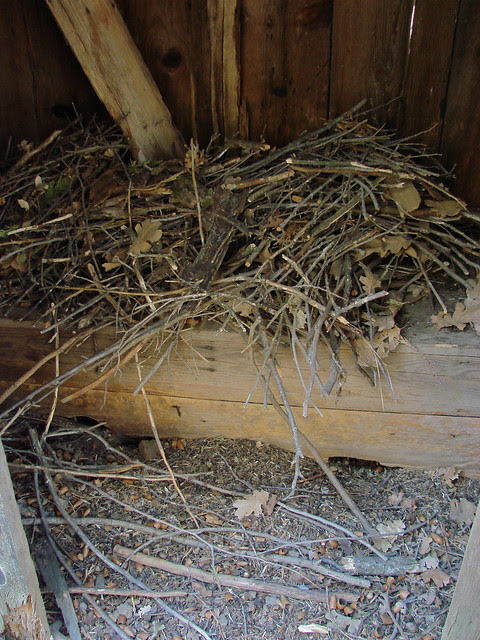 I.e., a fortress that coyotes, foxes, and badgers can't easily huff, puff and blow down. At least not until woodie safely scurries away. Seriously - can you imagine what a Cal grizz of days-gone-by could do to a free-standing stick house? One paw swipe and - poooom - brown bear would be sampling pantries & tenants before the twigs finished raining down. Stick house in chaparral a coyote tried to dig out - until it ran into the hard, rocky center

Since they aren't burrowers, it's likely woodrats lived in and under things (as do their deer mice cousins), and then picked up the behavior of stick/rock/object collecting more recently in their evolution. Perhaps as a side-effect of their food caching that persisted for its benefits to safety and greater storage (to narrow cave and hollow-tree holes?).

Building materials... Be they branches, bark, leaves, twigs, or like, the "sticks" fuscipes use seem to be chosen first and foremost for availability, and then perhaps for climate needs and the woodie's sense of style. I say the last only 1/2 in jest - check out some of these hip homes... 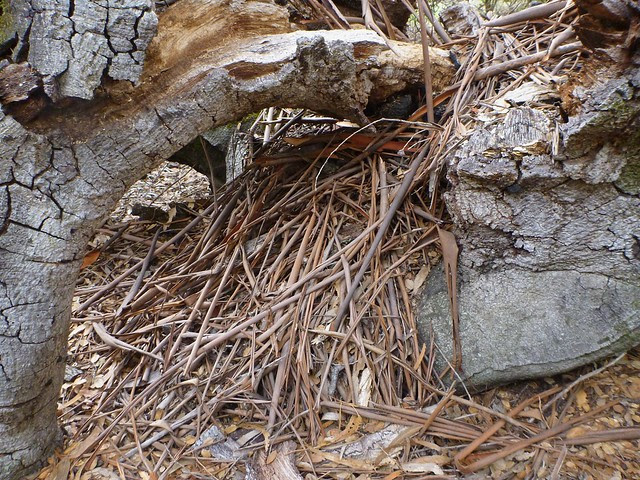 House against base of a downed-but-live coast live oak, made out of eucalyptus bark 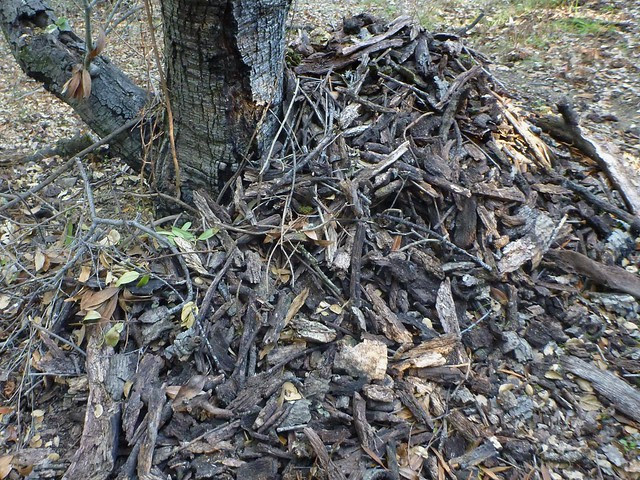 House made mostly of chunks of bark and rotted log 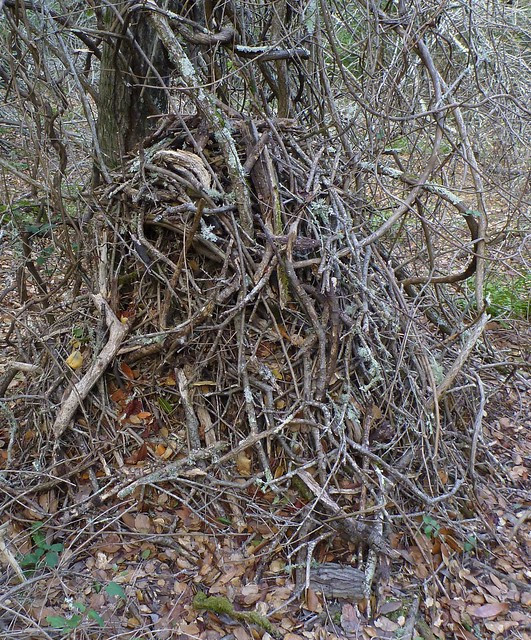 House in tangle made with some seriously large branches - a few are over 24" inches long. The typical adult Neotoma fuscipes is 8" long, with an 8" tail, so the equivalence is us dragging 8" diameter, 15-foot long, 100lb wooden beams around - with our mouths

In fact, there's an amazing story from the 1877 American Journal of Science of an "Iron-clad Nest" that highlights their building prowess and penchant for stick-shaped materials...

"This house (in Oregon) was left uninhabited for two years, and, being at some distance from the little settlement, it was frequently broken into by tramps who sought a shelter for the night. When I entered this house I was astonished to see an immense Rat's nest on the empty stove. On examining the nest, which was about five feet in height, and occupied the whole top of the stove (a large range), I found the outside to be composed entirely of spikes, all laid with symmetry, so as to present the points of the nails outward. In the center of this mass was the nest, composed of finely divided fibers of the hemp packaging. Interlaced with the spikes we found the following: About three dozen knives, forks, and spoons, all the butcher knives, three in number, a large carving knife, fork, and steel, several large plugs of tobacco; the outer casing of a silver watch was disposed in one part of the pile, the glass of the same watch in another, and the works in still another; an old purse containing some silver, matches and tobacco; nearly all the small tools from the closets, among them several large augers... all of which must have been transported some distance, as they were originally stored in different parts of the house. The articles of value, were, I think, stolen from the men who had broken in to the house for temporary lodging."

A perfect example of a generalist builder that specialized locally.

As mentioned, climate may also play a role in material choice. Here's a great example of a house in the Sierra Nevada foothills, where, in fall, some dusky-footers add a fresh layer of hand-sized black oak leaf "shingles" to help keep heat in, and rain & snow out: 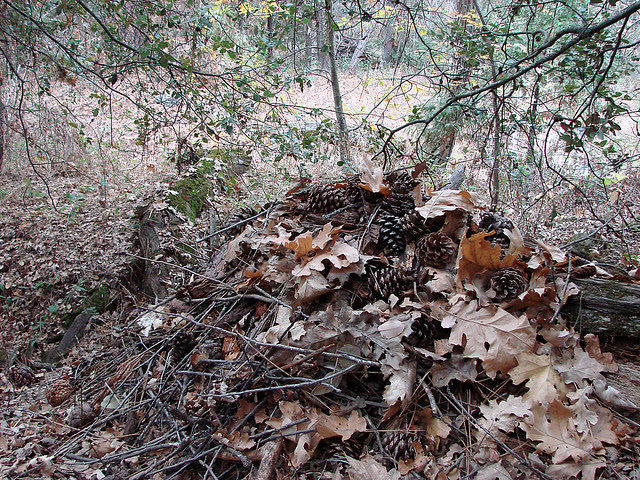 In some habitats, their choice of leaves for filling cracks and such has proven extra beneficial. For example, in the Santa Cruz Mountains, where Neotoma fuscipes annectens collect bay laurel and eucalyptus leaves for both food and roof repair, the oils in the leaves rub off on them, and help reduce the number of ectoparasites they carry (e.g., ticks and fleas).

And yes, those leaves and twigs in their walls are often back up food sources.

Occasionally, woodrats - both males and females - build in trees. Always fighting gravity and wind, these houses don't usually last long though. The added safety isn't worth the extra work. 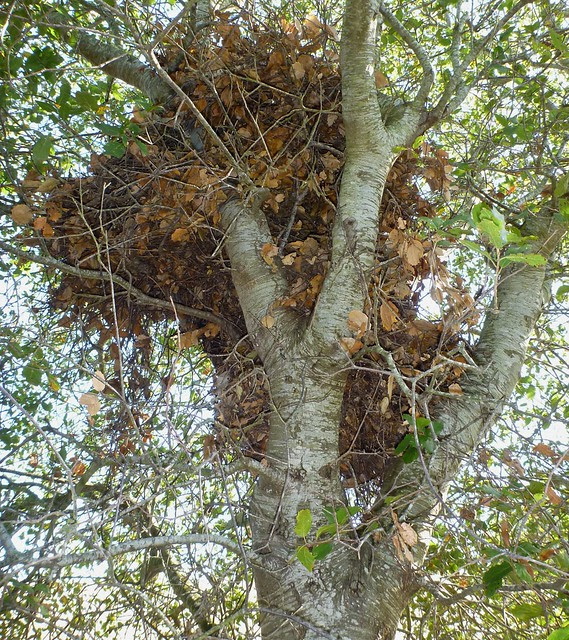 Not all dusky-footed woodrat houses have stick piles, btw. If they find a safe space that doesn't need clogging up, such as in a hollow tree, tight rock crevice, wood pile, or attic - the woodie may not add any sticks, and go stealth. But, being a clever critter, it's also possible they do this just to purposefully annoy the scientists trying to determine their population densities.

The main room of the house - the nesting chamber - is what the lodge was actually built around, and is usually tucked away in the toughest, safest location of the house. I.e., the center of the hollow log, the deepest crack between the rocks, or a remote recess of the tree trunk cavity. 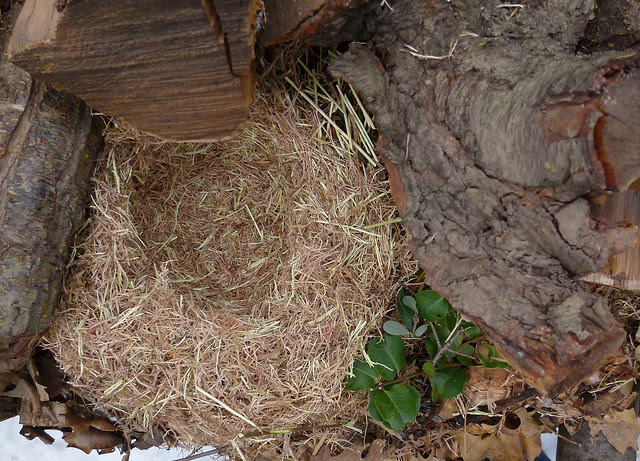 True woodrat "nesting chamber" - where the home owner sleeps, has pups, etc. This one is made of oat straw and cedar shreddings, and is hidden in a stack of firewood. Note the bedside snack of hollyleaf redberry and buckbrush ceanothus - yum!

That core nesting chamber is connected to multiple pantries, entries and back doors by a series of small "tunnels" that the woodrats chew through the sticks, as needed. And, as a house gets larger and older, the number of corridors, pantries, nooks and exits often increases to the point where some aren't actively used. Which may be where a few of the housemates live.

Pantries are here-and-there in the house, and often item specific - oak and toyon leaves in one, fungi in another, and acorns in a 3rd... However, this separate stashing may have to do with the temperature and drying needs of the food source, and not woodrat OCD. The sensitive woodies are well-known for their climate control - so much so, that Native Americans were rumored to hide items in their houses on occasion, knowing they'd never rot. 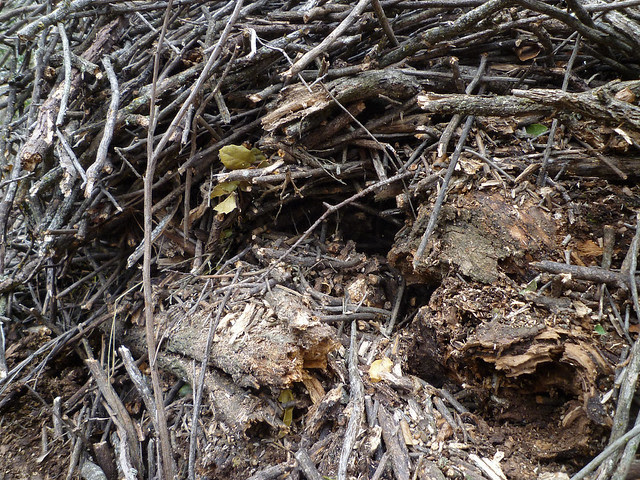 Accidentally sectioned house showing central tunnel from one side to other that's under the protection of the core structural log, and quite dry

Because woodies haven't developed inside plumbing yet, they poop on the back stoop. I.e., not inside their house. Unless weather or safety doesn't allow, of course - then they poop in the doorway and clean it out later. Thus, if you find a latrine, there's a rear door near by. 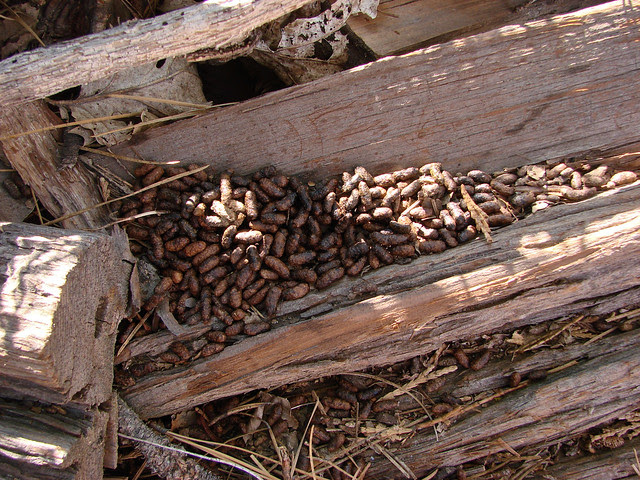 Woodrat latrine - also in a pile of old firewood, but on periphery of the core living area where nesting chamber and food pantries are

Building codes, intelligent interior design, outside toilets, and ecologically-conscious community construction. And we call ourselves the first truly civilized species.  :)