If the Ecotones' stick house is situated in a hip, connected, edge-of-the-city neighborhood, then the house of Lady Prunus is on one of those classic, quiet, colonial, tree-lined lanes - in an old neighborhood, where droppin' by for a cuppa coffee is commonplace. 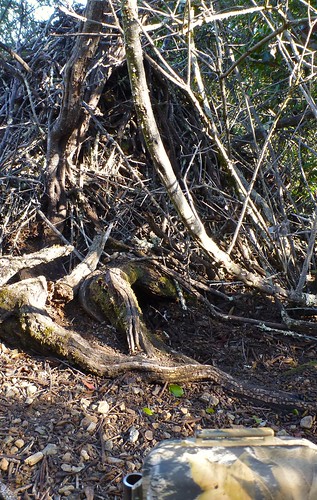 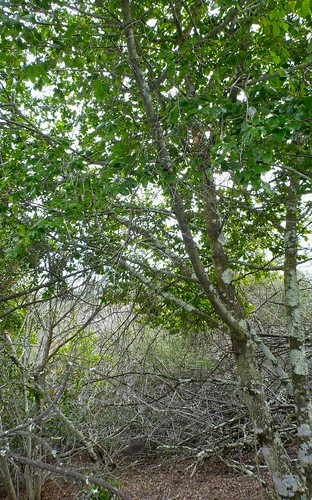 The house of Lady Prunus is in a cluster of toyon (that's the cam trap in the foreground), and right next to 2 big hollyleaf cherry, and several California coffeeberry 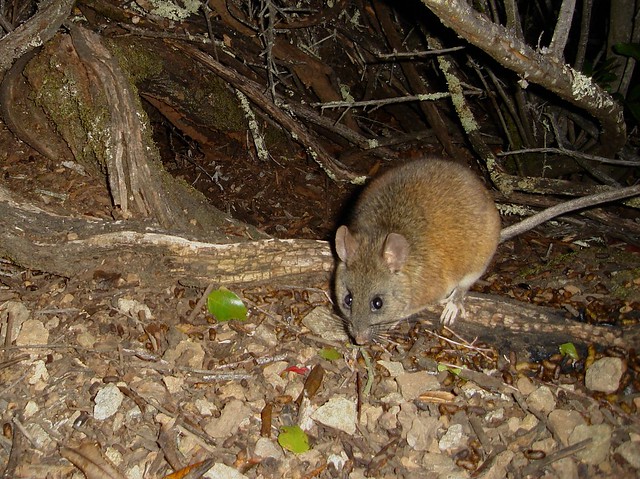 "May I help you?" Lady Prunus, sitting on her front porch, giving the camera a look-see. She seems a bit plump - I wonder if woodrats "show" when they're pregnant? 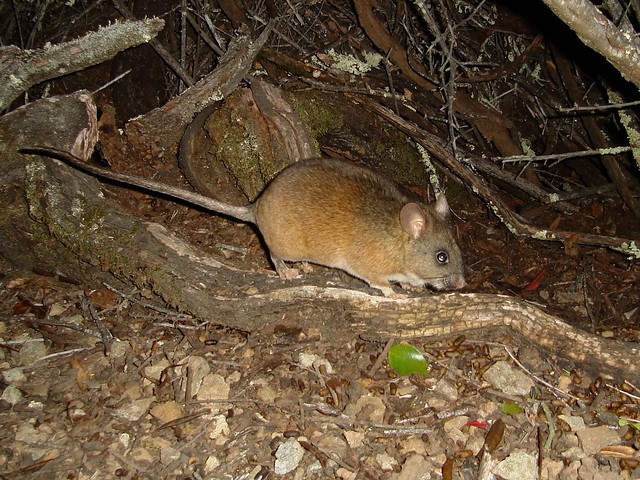 Heading out on some errands. She has a branch highway too (or root sidewalk?) 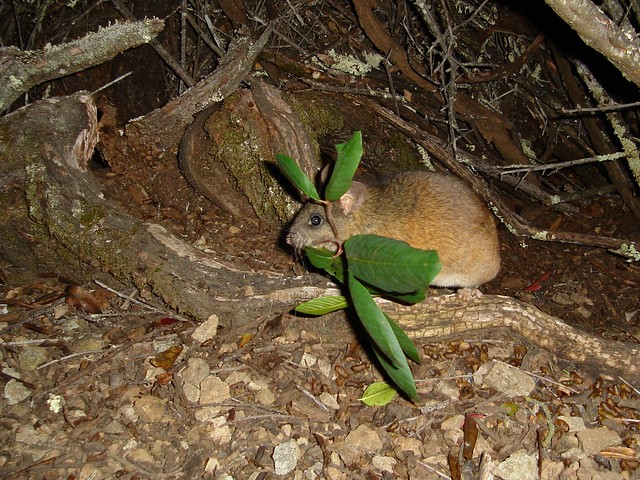 Coming back with a cuppa California coffeeberry

Now we know why she lives on Berry Lane. In fact, Neotoma fuscipes annectens is a herbie that will happily eat the leaves, buds and fruit of all 3 species, with toyon and coffeeberry being top foods. They also forage the foliage/fruits/seeds/acorns of live oak, bay laurel, willow, poison oak, blackberry, rose, elderberry, snowberry, soap plant, gold-back fern, and even the non-native European olive. Plus, they go after fungi, such as boletes, puffballs and brackets. In biologist speak, they're "generalist herbivores that specialize locally."

Notice that the core of their diet is some pretty tough and toxic stuff. But also note that many of those leaves come from evergreen perennial shrubs & trees - i.e., plants that are around all year, including in winter (woodies don't  hibernate), and during harsh California droughts, when many annuals might not come up or survive. Smart.

And what about those toxins? Well, they have that well handled too. Not only are their complex guts rich in mutualistic protozoa that help detoxify many of the tannins and polyphenolics, but, they also "age" some leaves in their larders, to allow the toxins to reduce naturally, and make them more digestible. You know - like Tequila. 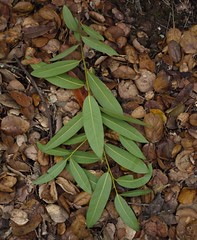 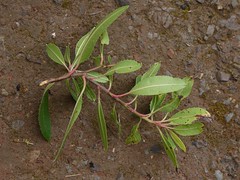 Woodrat forage sign. They climb up into the shrubs and trees, nip off branch tips, and then climb down and collect them (often over several nights) to stock their pantries back home (bay laurel, toyon, coast live oak and European olive) 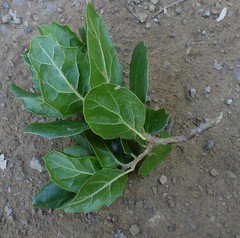 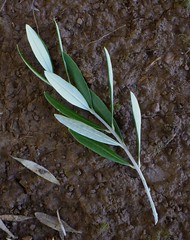 And when they forage, they prune. Which seems to have a beneficial effect on the shrubs - they branch more, and thus produce more flowers and fruit. Which is also good for pollinators, and birds, and, and, and... 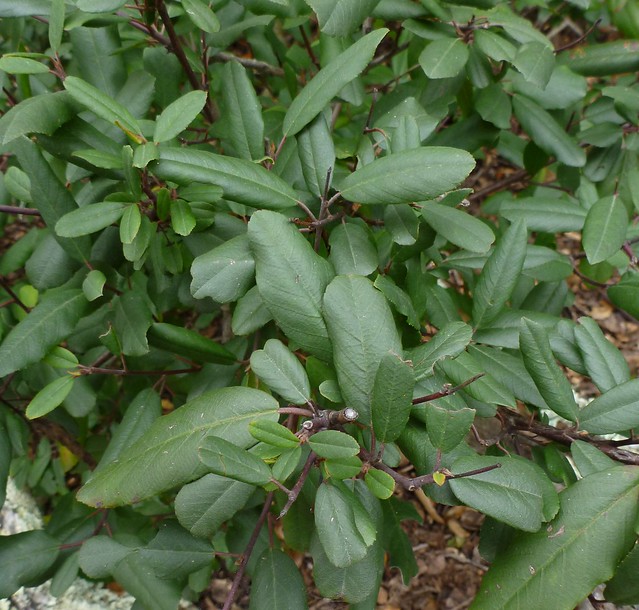 Coffeeberry pruned by a dusky-footed woodrat

If the shrub or tree is tall, the woodies will also clear out small internal branches to make it easier and faster for them to climb up and forage. 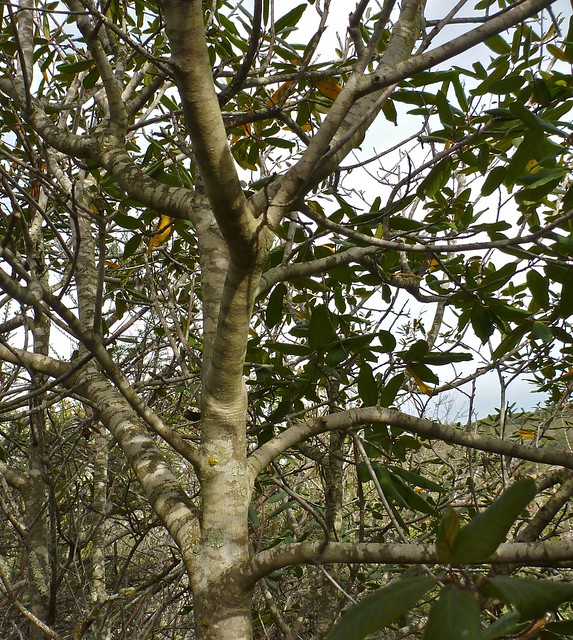 Lady Prunus also has several friends and suitors that visit her on Berry Lane... 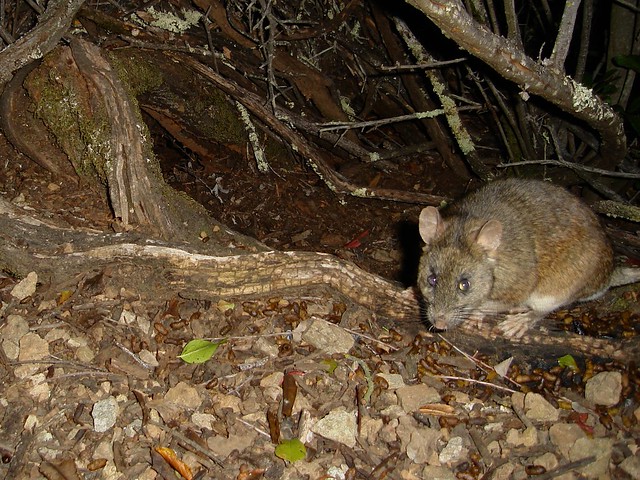 A male suitor or mate dropping by 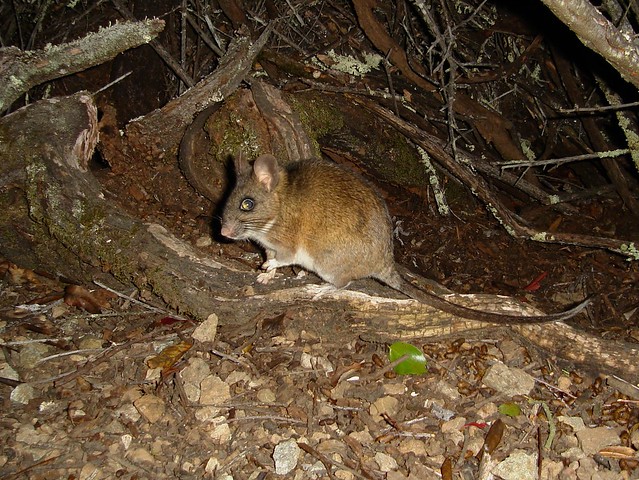 A female or young male popping in for a visit. She (I think) has the black eye ring of Mr. Most-Interesting. Perhaps they're related - they live less than 500 feet apart, and young woodrats will disperse that far when venturing out to find/build their first home

And, she's quite the popular landlady. Her house appears to be home to 3 species of Peromyscus mice: californicus, maniculatus and truei. I.e., California, Deer & Pinyon.

With the lucky ensatina, that makes 4 Neotomaphilic species we've caught to-date. A far cry from the numbers that researchers have found. There are literally hundreds of documented species of mammals, herps and inverts that co-habitate in woodrat stick houses. Here's a taste of the laundry list of live-ins: shrews, rabbits, mice, lizards, frogs, salamanders, snakes, spiders, scorpions, centipedes, millipedes, and every kind of insect, from beetles to butterflies.

Many, such as the California mouse, are so dependent on the active houses, that their populations rise and fall with the woodrat's booms and busts. 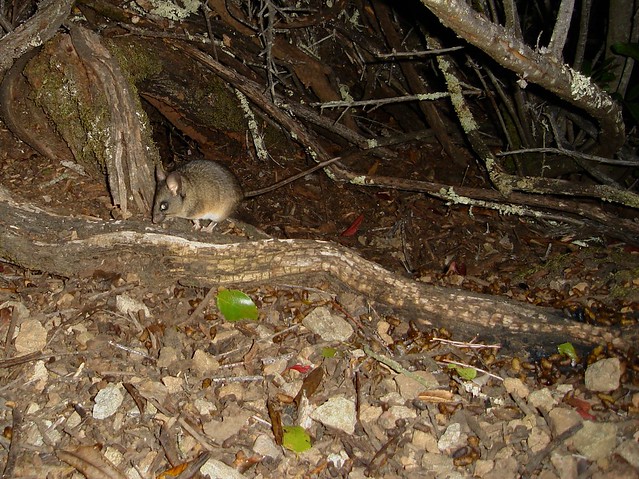 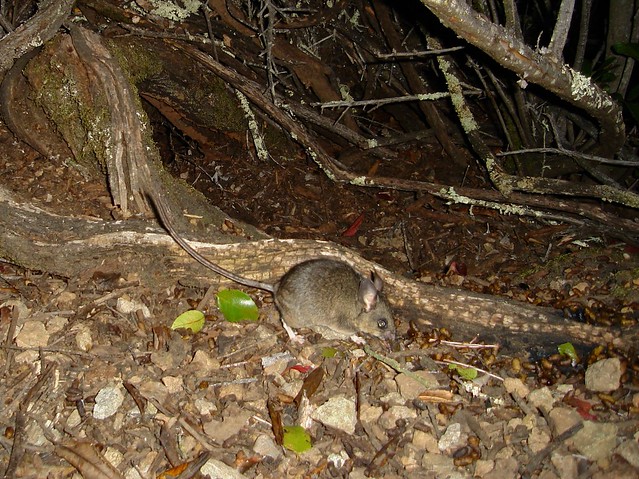 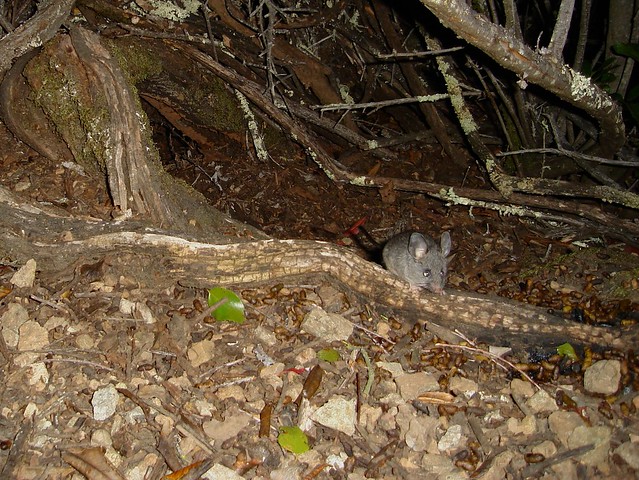 One nice thing about a fixed position camera - if the critters are roughly in the same spot in the shots, you can compare their relative size. 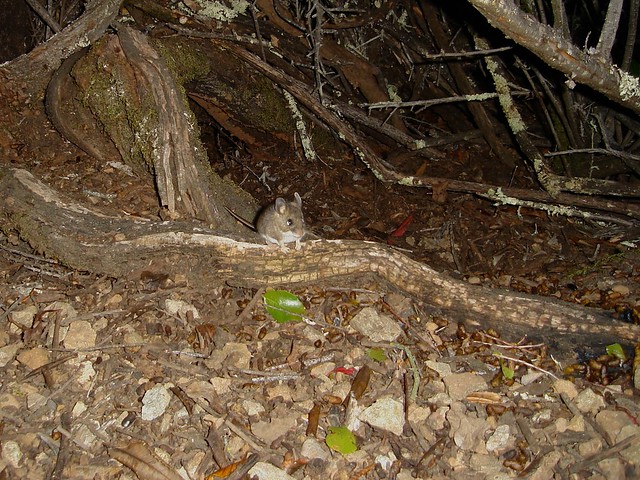 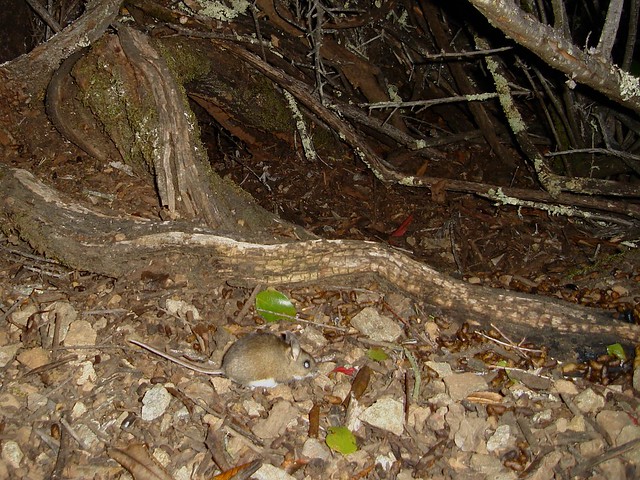 You might think that the mice would be competing for the same foods, and thus - why doesn't the woodrat chase them off? It seems that between their size differences, and the mouse preference for insects, they're limited competition (dusky-footers don't eat crawlies). 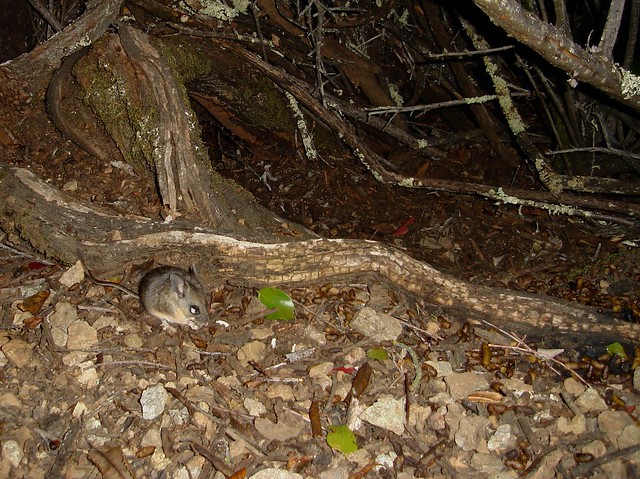 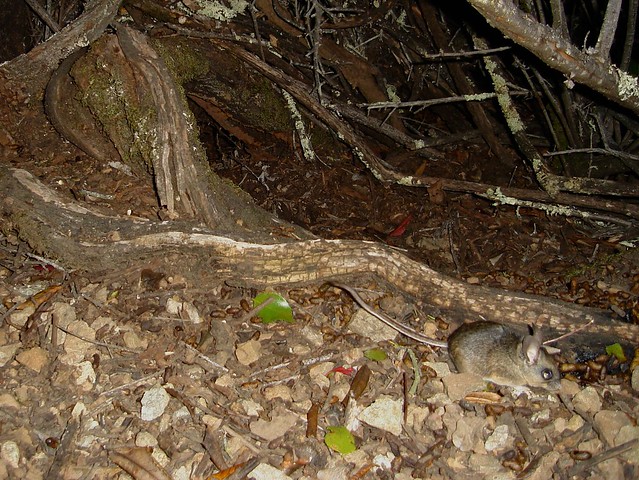 Due to these amazing ecosystem engineering skills and willingness to take on tenants - and like beavers, prairie dogs and woodpeckers - dusky-footed woodrats are a keystone species. I.e., a species so relied upon by numerous other species, that loss and fluctuations can have drastic effects on those commensal species. Like pulling the keystone from an arch.

And, it appears, that the classy Lady Prunus is quite a keystone to life on Berry Lane.