Over the past year + of removing invasive plants with the amazing Weed Warriors, I've seen some really cool flora and fauna. It's one of the many benefits of spending hours off-trail with experts in a beauty park like Edgewood Preserve.

But, we also occasionally find odd artifacts or animal bones. Sometimes sad, but also interesting, for they give us clues into what goes on in the park when we're not, or weren't, around.

Sometimes it's a deer that mighta been taken by a cougar: 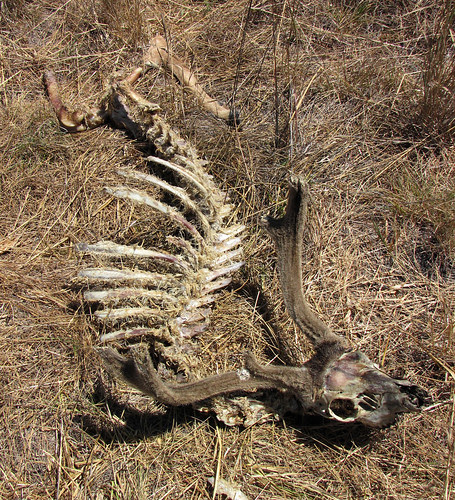 Or, an owl pellet under a perch: 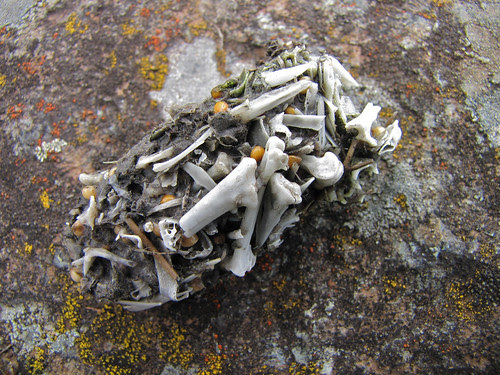 Or, even the discards from some forgotten civilization... :)

But, often it's a skull and/or partial set of older bones of a smaller mammal.

Which can make for some fascinating forensical and paleontological mysteries.

Because each has a story to tell.

Here's five that we've found. We think we have them sorted properly, but we're no bone experts, so we'd be happy for any thoughts and expertise y'all might have to offer up.

Pretty sure this lady black-tailed deer ran into the pointy end of a mountain lion. Her bones were mostly all together, and were secreted away under a thicket - typical of a cougar kill. 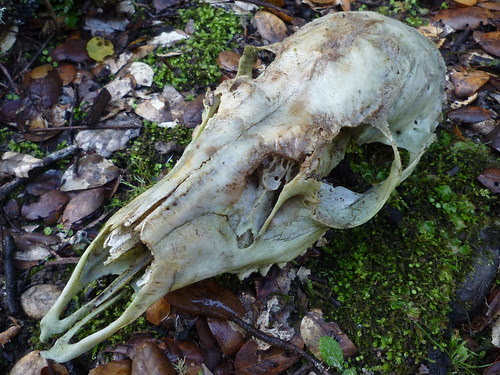 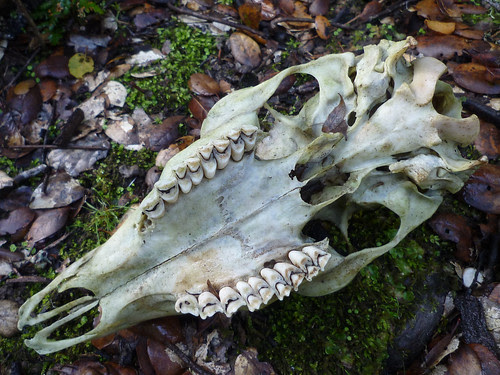 The first raccoon skull we found has quite a bit of character to it. Moss-covered with well-worn teeth, it looks like it might be an older male coon. The sagittal crest is quite heavy, and the post-orbital processes stout, which are tells for raccoons, and are most prominent in males. 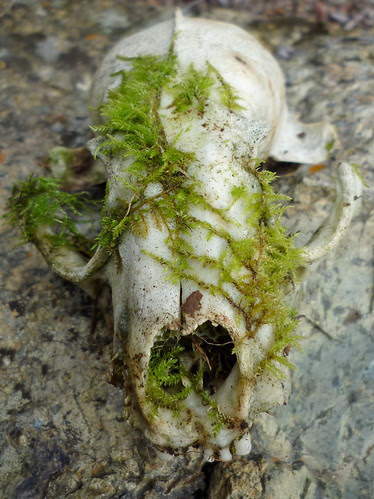 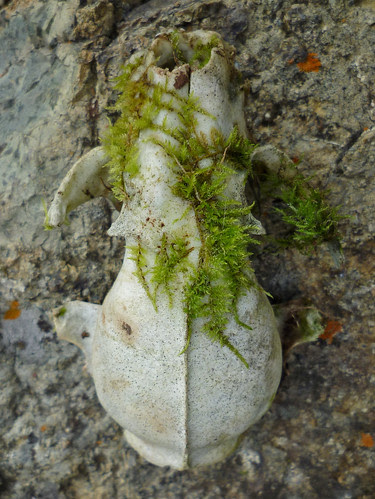 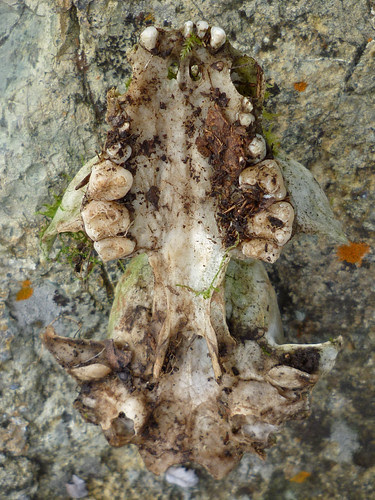 This second skull is a bit tougher, but we're thinking a younger or female raccoon. The sag crest and post-orb processes are there, but not as stout as above. Dentition seems right, too. 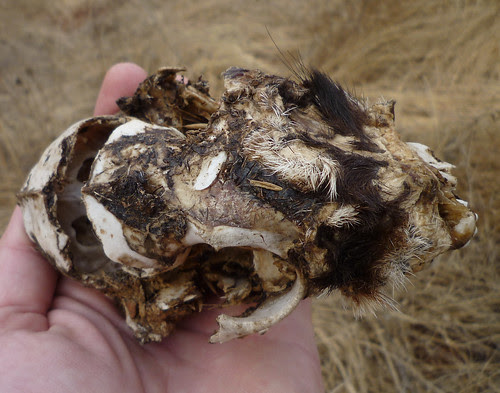 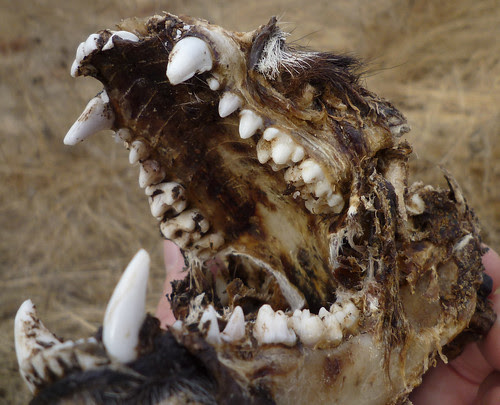 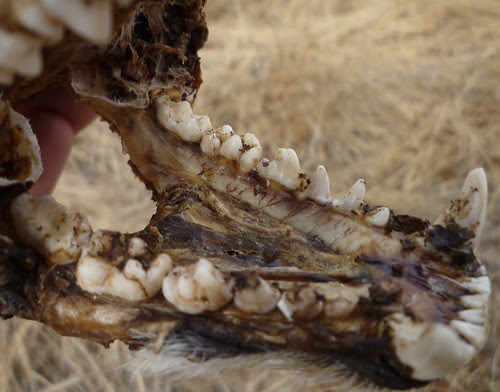 A bobcat with a limp

Based on the size, shape, and contour of the occipital shield (the back of the skull), and what remains of the orbitals, we think this partial skull and leg bones might be a female bobcat.

It has some raccooniness to it as well, such as those mastoid processes, but no distinct sagittal crest. And, the shape of the cranium and orbits look wrong for striped skunk, or any canids, such as gray foxes, coyotes or domestic dogs. And it's def no domestic cat.

So, that leans us towards bobcat. 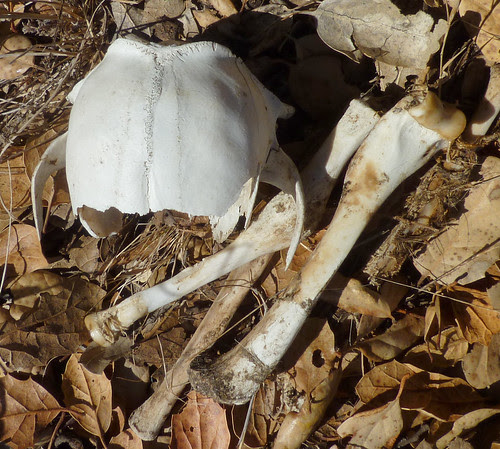 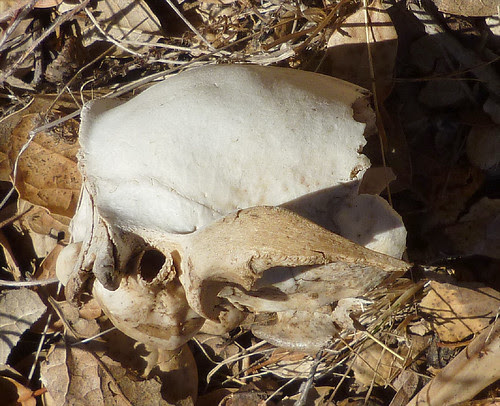 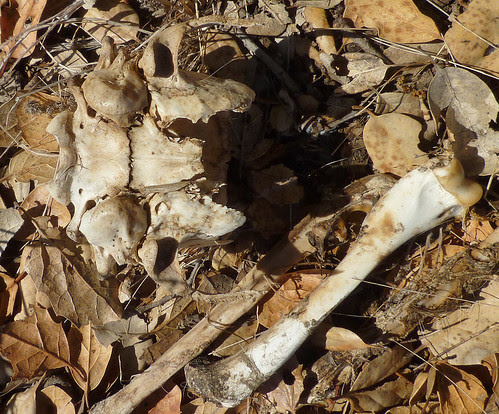 The most interesting aspect of this find was this leg bone that's been broken and mostly re-healed, but slightly crooked. Maybe a tibia? 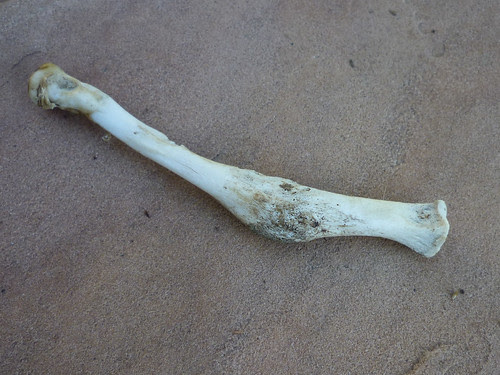 Too bad this bobcat didn't meet these guys: Injured Bobcat Back on the Prowl...

This is the skull we're least sure about. Again, no strong sagittal crest of the raccoons. And, the nose is too short for a fox or coyote, but too long for a bobcat. The teeth are also wrong for a felid (molars). And they're also kinda clean and unworn looking - as if it was eating soft food.

So, we think it might be a domestic dog - perhaps one that had gotten away and met an unfortunate end in or near the park, by car or predator. Or maybe natural causes. 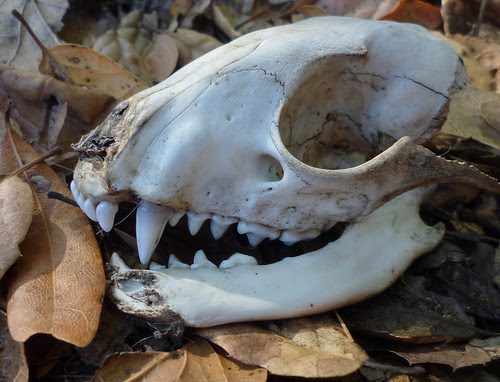 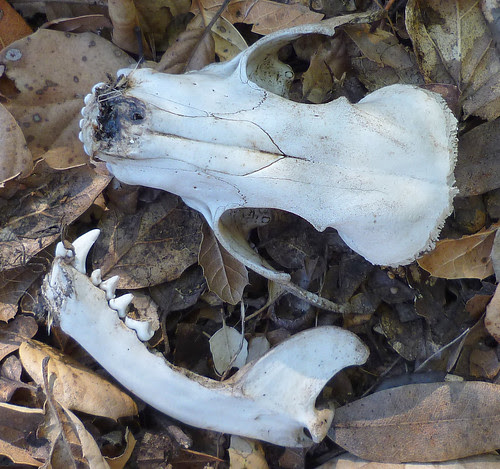 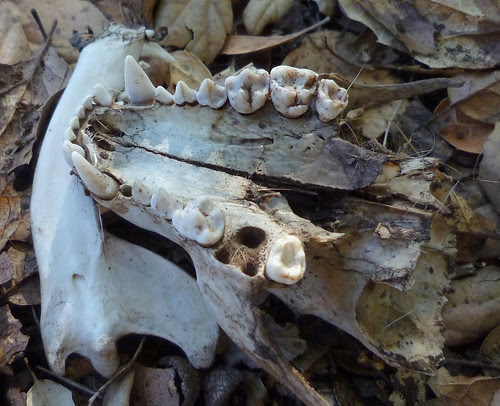 If it was a lil pooch - rest in peace pup. Edgewood Park is a fine place for it.