Along with all the adorable bathing of the dust bunnies, the 3rd round at the pygmy rabbit cam also added a few new characters to the cast.

Sage sparrows and a rock wren were caught foraging through, and a new kangaroo rat moved in. 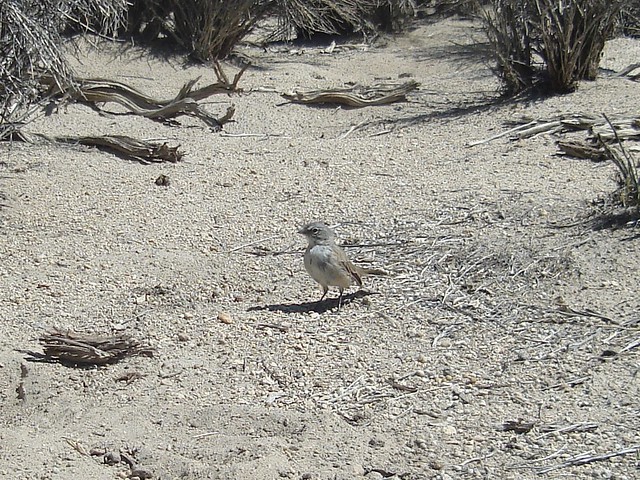 Sage sparrow in the pygmy rabbitat

Much like sage thrashers, sage sparrows are common to the sagebrush scrub habitat, and I often see them zipping around like mice as they run from shrub to shrub. 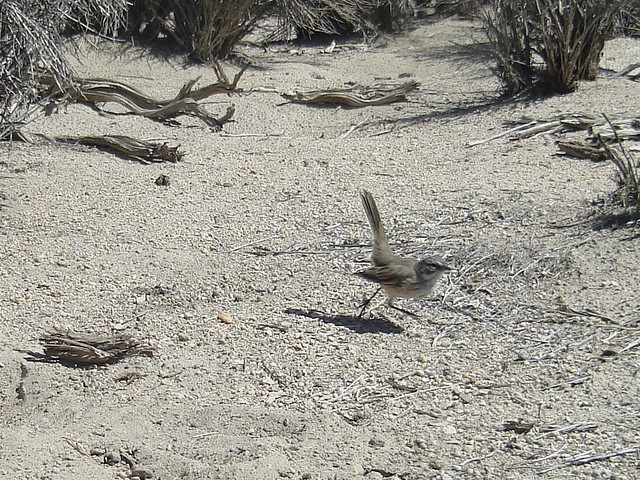 Sage sparrow on the move with tail held high

Have to admit, I'm quite fond of any sparrow that makes itself easy to ID to species.

The rock wren is interesting. Pretty open, flat, un-rocky terrain for them. I'm wondering if the Brachylagus burrows are the main attraction. I started dabbling with an HD video cam trap in the rabbitat, and while the footage isn't worth reporting yet, a couple of clips suggest the rock wrens are going down into the pygmy rabbit burrows. I'm guessing to hunt insects, not unlike the "dumpster diver" birds that prowl mountain beaver burrows and debris piles. 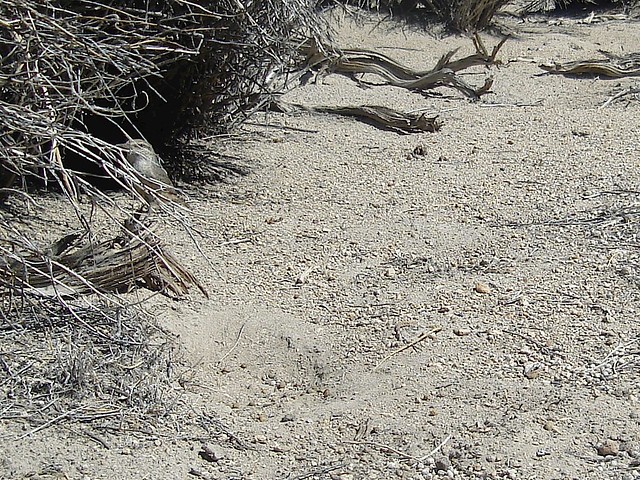 Rock wren near burrow, standing on the infamous dust-bowl stick after it was moved 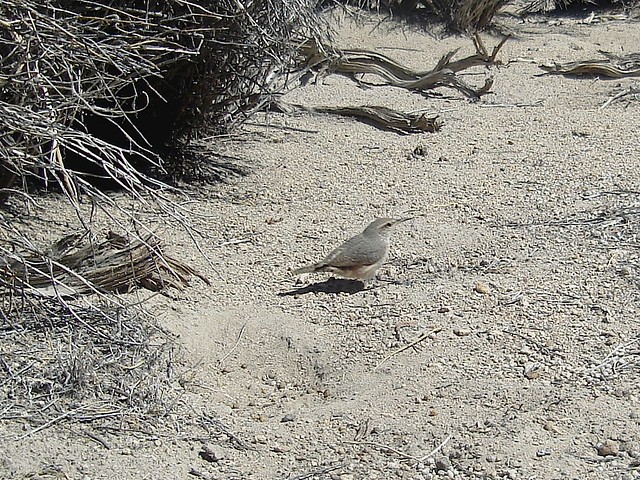 In the 1st round at this set, a kangaroo rat with a chewed tail was caught coming and going 7 times in the first 19 days. But then was never seen again.

And sometimes flew in too. 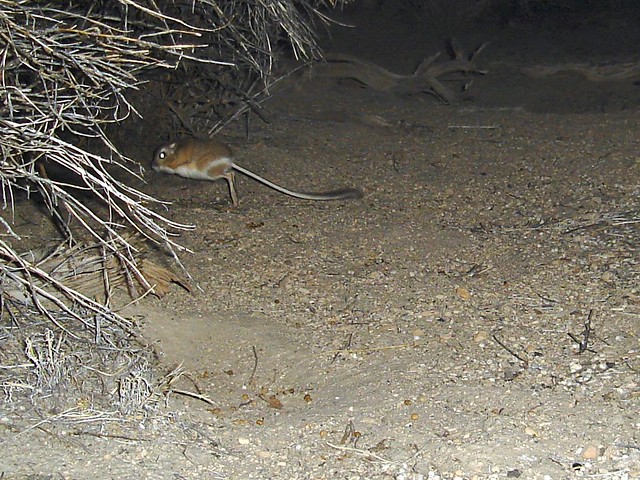 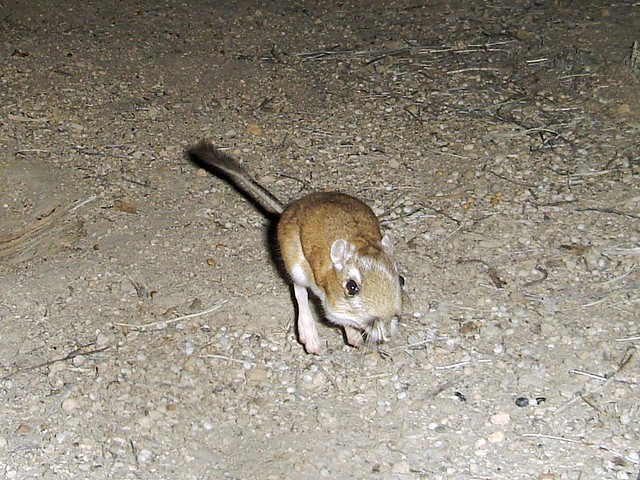 And hopping by the cam trap

Oh - and that young coyote came by a few more times too. Pretty sure it's the same one. 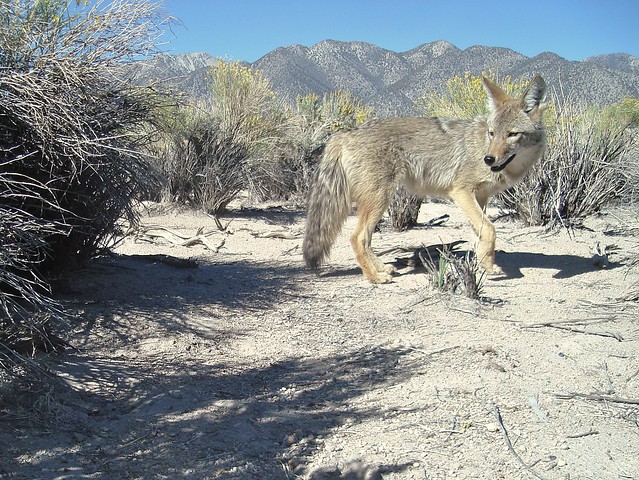 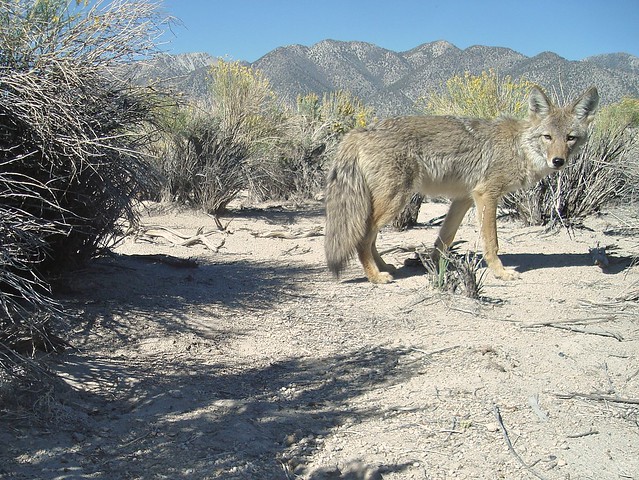 And then at the cam trap - "What are you looking at?"

Since these 3 rounds are likely the last for this year, here's a summary of the activity to-date.

Aside from the pygmies, 10 other species visited the bunny zone during the 3 reset rounds, which had 27, 37 and 38 active days each, for a total of 102 days of rabbitat monitoring out of 139 possible. The 37 missing days between rounds 1-2 and 2-3 - a filled memory card and dead batteries.

Species captured by camera in order of visit frequency:


Of the above, the k-rats, deer mice, chipmunks and toad are almost surely residents to the near area, living in and between active or old pygmy rabbit burrows.

1/2 of the black-tailed jackrabbit visits were from that single juvenile, which may have been birthed in a burrow in the complex, and thus was more resident than transient for the first round.

The Piute ground squirrel pair was just passing through, and the 3 birds and coyote - opportunists.

Species that might be in the area but weren't caught? Maybe bobcat, badger, weasel, cottontail, antelope ground squirrel, Great Basin pocket mouse… On the bird front it would be nice to see sage grouse wander through, or green-tailed towhees. And if a photogenic prairie falcon wants to plunge down and take a rabbit right in front of the cam - so be it.

I'm obviously looking forward to seeing what next season holds.