In a Family Way

The first 2 nights just one kit fox was caught on camera.

A handsome adult, coming and going, from and to, the Carrizo Plain burrow complex the cam trap was set near. 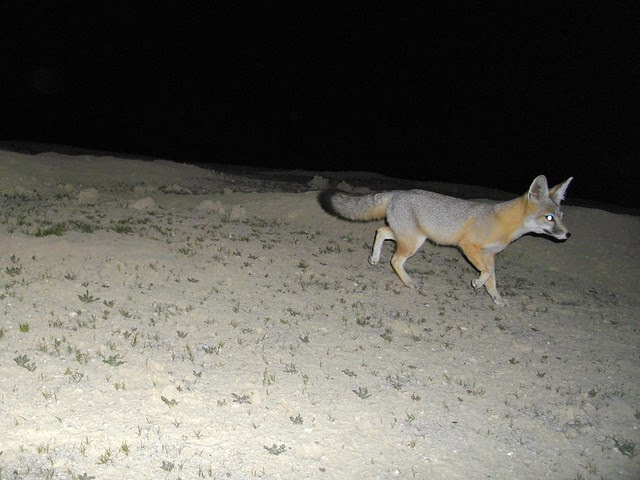 But on night 3, and thereafter, a second and third started popping up, proving that the timing of our CDFW bio-bud Craig couldn't have been better. 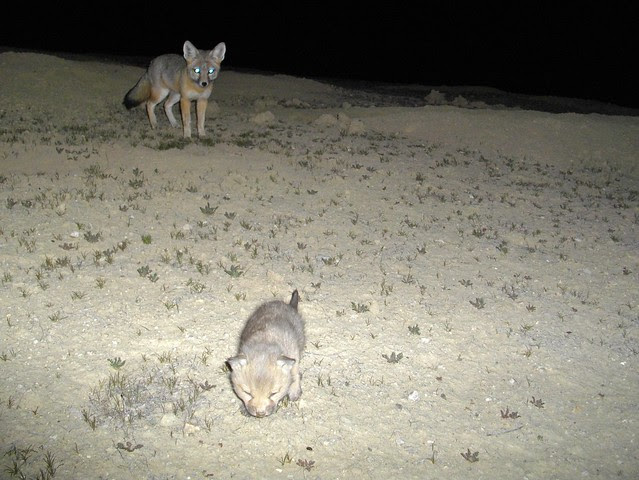 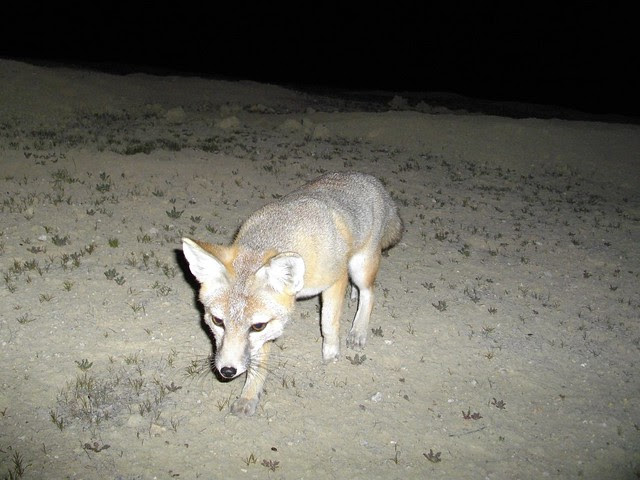 A pup, with Mom in hot pursuit.

But only 1 pup. No more ever emerged from the den, if there had been any.

Which shows how tough a year it has been on the Carrizo Plain and southern San Joaquin Valley. An area that Twisselmann perfectly described in his Flora:

"...the climate of the region can be summarized as very dry, with fog and rather concentrated winter rainfall preventing the formation of a true desert."

And this past winter there weren't any concentrated rainfalls.

As you can see from this photo of the burrow mounds 'n surrounds taken on March 21st, when we set the cams for this study: 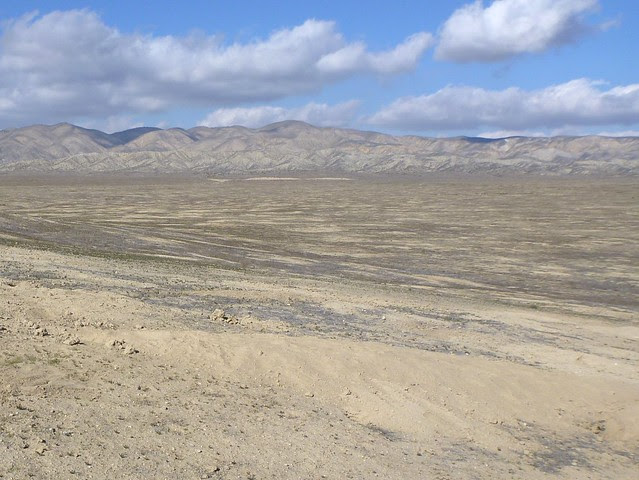 A concept well proven by the excellent work of David J. Germano of California State University Bakersfield (along with friends) in the paper "The San Joaquin Desert of California: Ecologically Misunderstood and Overlooked."

But deserts are also the true native habitat of the kit fox - a species deeply tied to the arid, open lands of the southwest, and their loose sandy soils and prolific Rodentia.

Which the cat-size foxes don't seem to have a hard time finding, even in drought years. 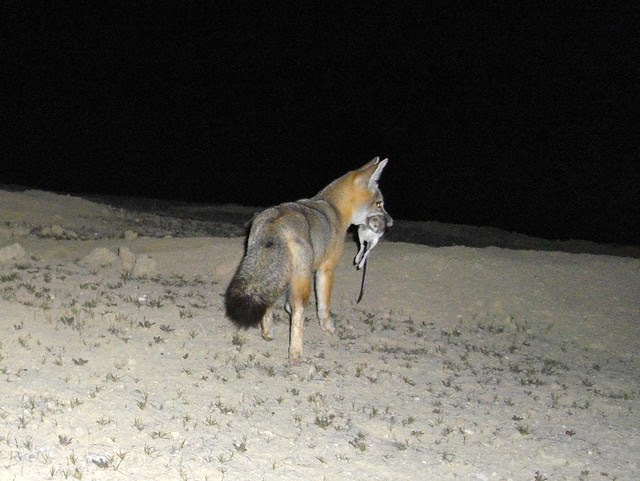 But I expect that's because the bold little seed storing kangaroo rats are all over the place - even hopping around the den complex of the kit fox family: 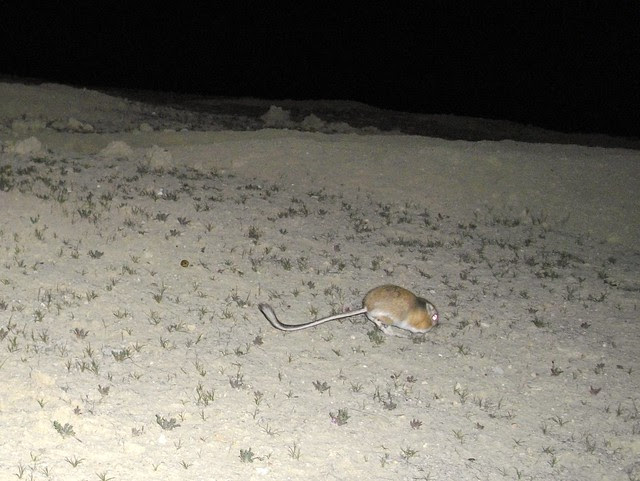 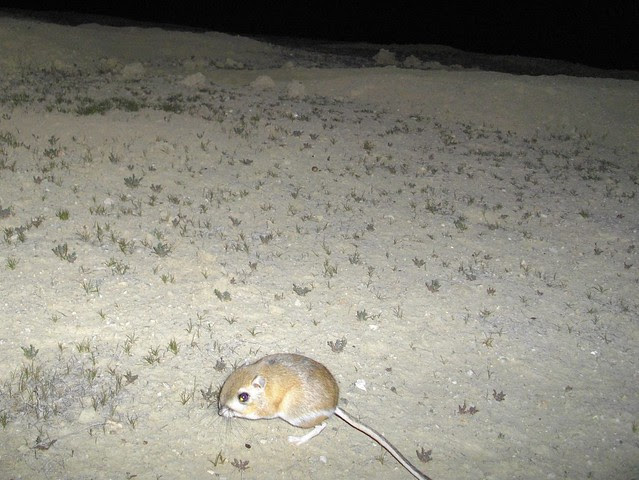 Small (baby?) desert cottontails are also on the menu, but jackrabbits are not commonly chased unless they can be ambushed, or other fare is rare. About 6lbs in weight, an adult bt jack is pretty much the same size as an adult kit fox, making them a risky treat. 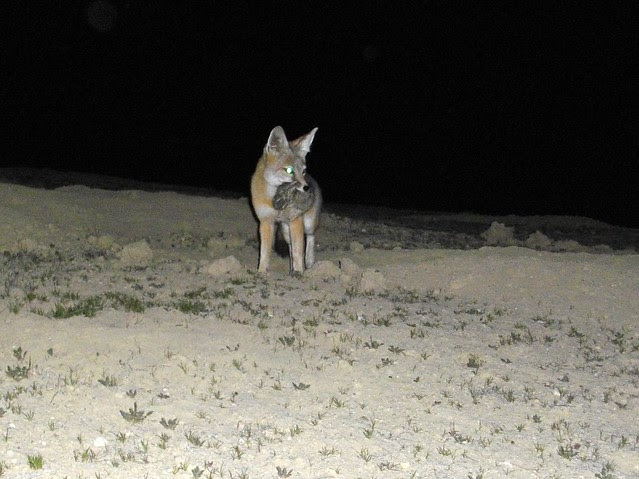 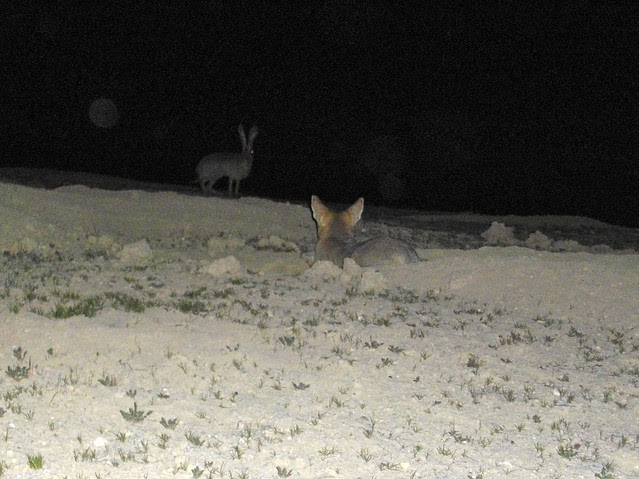 But k-rats are by far the most common prey. And, in this case, not just any ole species, either.

These are Giant Kangaroo Rats. 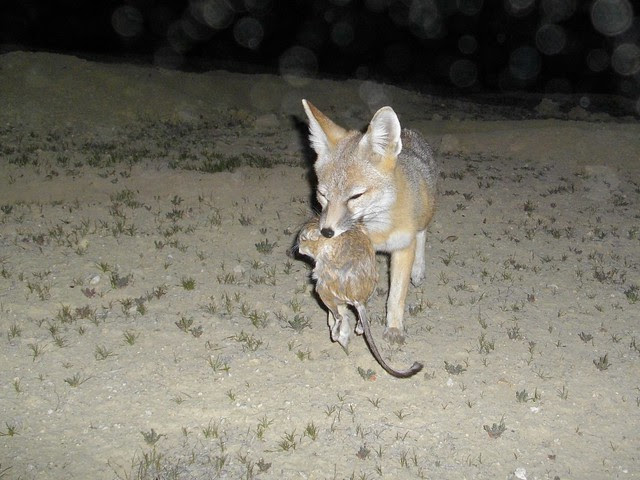 Meaning that what we have here is an ESA two-fer. The Giant Kangaroo Rat, Dipodomys ingens, and San Joaquin Kit Fox, Vulpes macrotis mutica, are both Federally listed Endangered Species.

But the dependence on the giant k-rat by the SJ kit fox is one reason it's listed, so the kit fox has the proper "collection" permit. :) 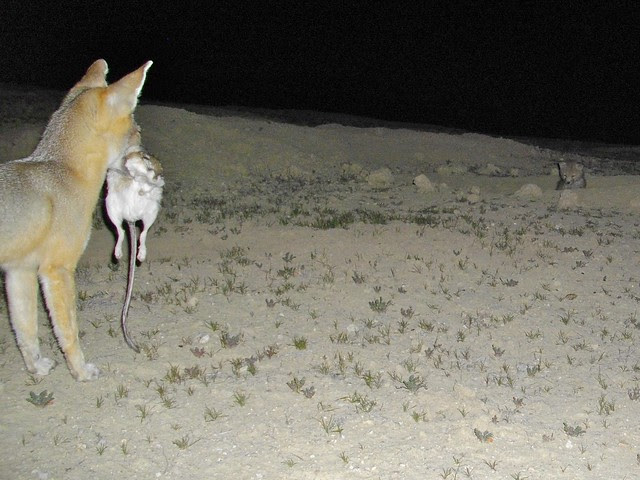 So if there are all these k-rats still around on a drought year, why only 1 pup?

Kit foxes typically have 2-5. And this wasn't an isolated case. Most of the kit fox families under study had 0-2 pups this season. 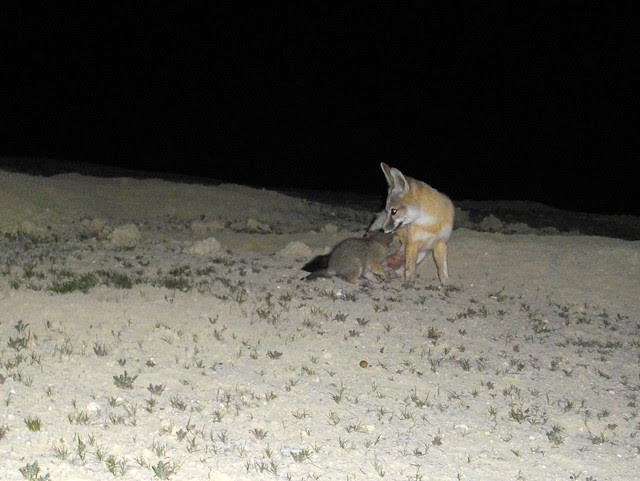 It's a good question. And one without full answers. But there are solid theories. And Mom's lactation may play a role. Lactation levels needed to support 2-5 pups might require forage other than just k-rats. Forage in poor supply in drought years. Or, perhaps, other nutritional triggers "predict" the season earlier in the year and limit lactation as a way to thin litter size. Hmmmm... 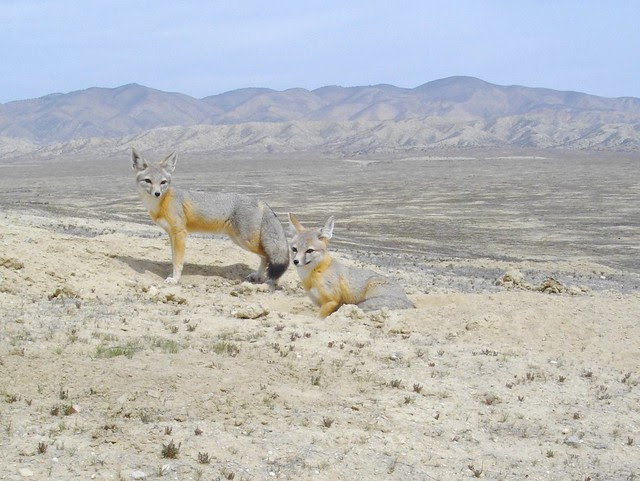 Along with food, another parental role is protection. Which for kit foxes, means choosing a safe location and always staying vigilant for intruders, such as coyotes. 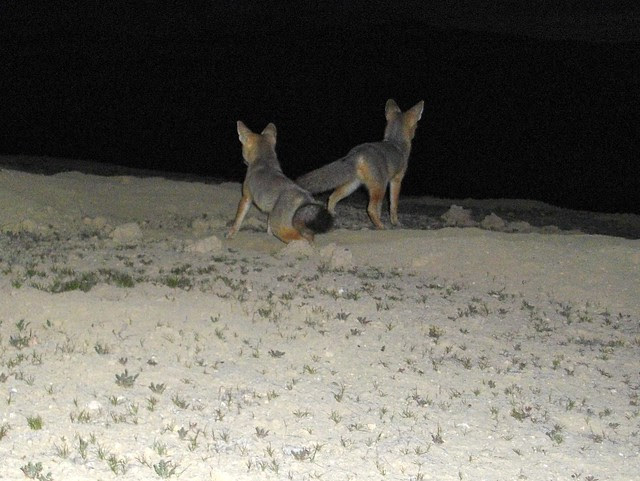 Having both parents around really helps with that as well.

One sleeps, while the other acts as lookout. 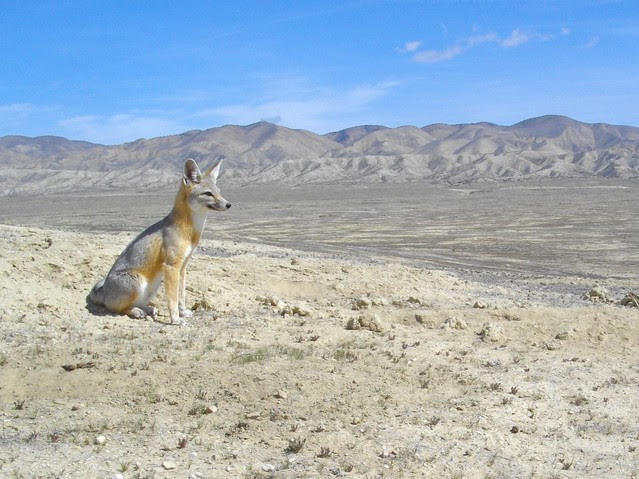 Or one hunts, while the other pupsits. 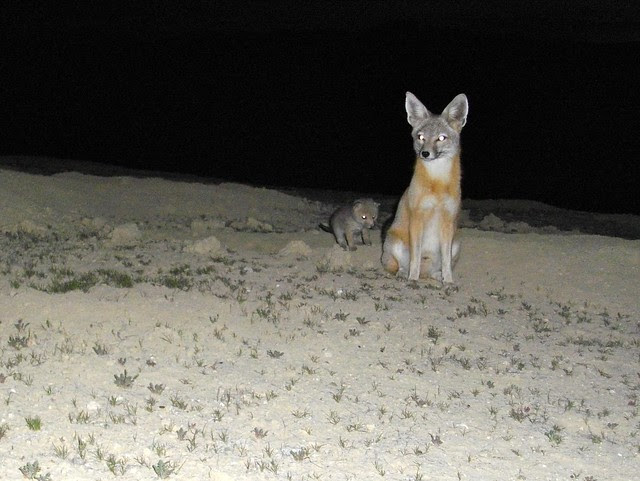 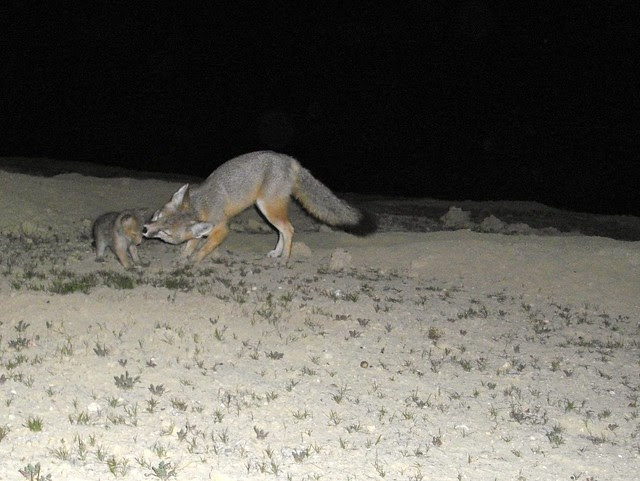 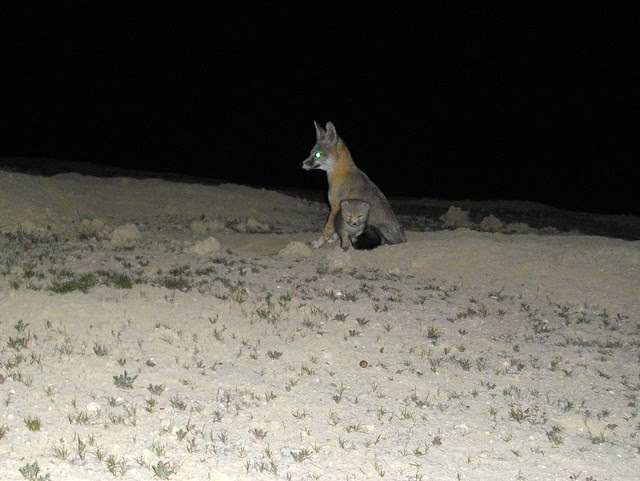 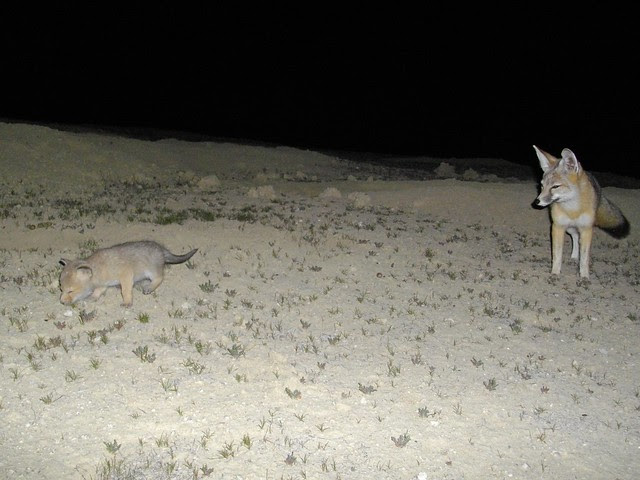 And week 1 done of the pup above ground.

What's next for our fine kit fox family? 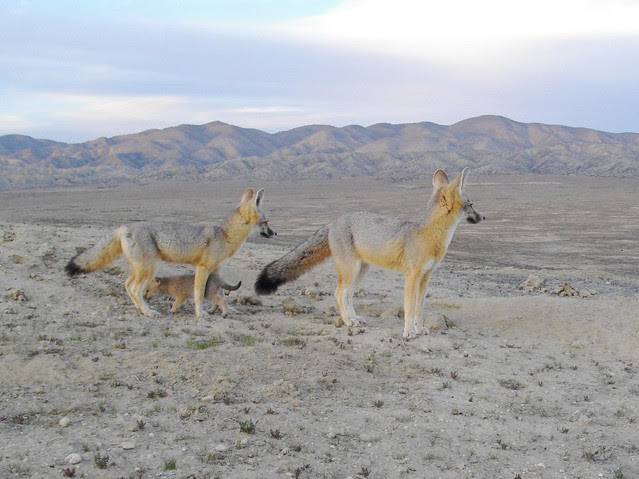