In late 2009 I decided to expand my arsenal of camera trapping technologies.

Might have been the afterglow of my first trip to Chimineas with the Camera Trap Codger that caused the bit to flip - or because I'm a total gadget geek - but I think it was actually a heaping of both, dashed with a dose of dissatisfaction with the poor photo quality of the off-the-shelf trail cameras I've been using - the Reconyx and Moultrie.

With no true optics, a fixed focus, high ISOs, and only 3-6 mega-pixels - they're pretty crappy cameras. It's one in a thousand that you get a truly solid brag shot. But they're simple, can be very fast, and have great battery life - the Reconyx can wake & take a pic per second and be out for months - making them great for surveys and sets where you don't need quality, but surety. Such as when tracking the comings and goings of deer for hunting (I'm told).

So, to fill the quality hole and scratch my hobby-hacker itch, I followed the Codger into the world of "homebrew" camera traps. And I can already say that I'm a happy homebrewmaster for it.

Homebrews are home-built camera traps centered around 3 key ingredients:
The microcontroller chip is the brain of the trap. It has software on it called "firmware" that stores your settings and goes into action when the IR sensor registers a heat signature in motion. I.e., based on your settings, it turns on the p&s camera, triggers it to take photos until the motion goes away, then turns it off and goes back to sleep. Small dip switches on the card allow you to change the settings and thus tell the chip what to do when it wakes up. If you set it to only take photos at night, it does that. If you set it to take movies, it does that.

For my first homebrews I decided to try YetiCam. They've got a good rep and their new Pentax-centered kits looked right for my needs. Here's the key features I used for decisioning:

And here's the parts with the to-be-used Pentax Optio e50 pocket point-and-shoot: 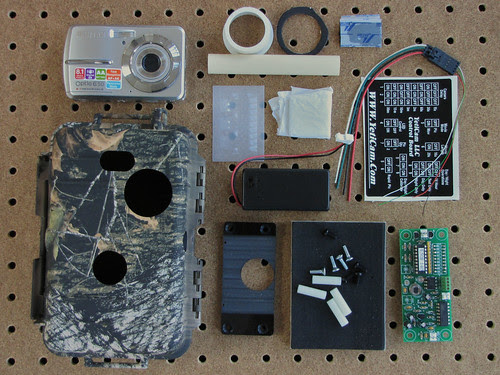 To hack the camera and put together the kit I used:


- a soldering iron with a fine tip
- small screwdrivers, needle nose pliers, wire strippers, x-acto knife...
- a well lit work area
- ability to do fine work with small tools
- time - can take hours per cam trap but gets much easier after first one
- patience - you'll mess things up and wanna redo them 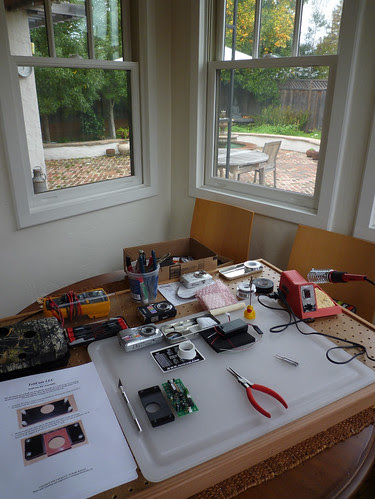 I won't explain the build-out since that's covered in various kit docs, but here's the nutshell:
While I haven't assembled any other cams yet, I'd have to rate the Yeti kit as good, but not great. The fit & finish of the lenses and all the glue-assembly could be more precise and less "crafty." But I'm not complaining. I like the end results, and they are less expensive than good off-the-shelf trail cameras - my cost per was about $200 total (discounting time of course). 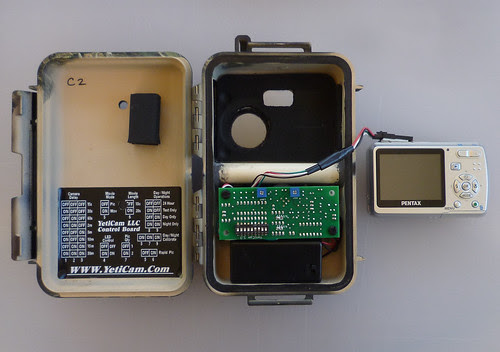 Ready for the field: 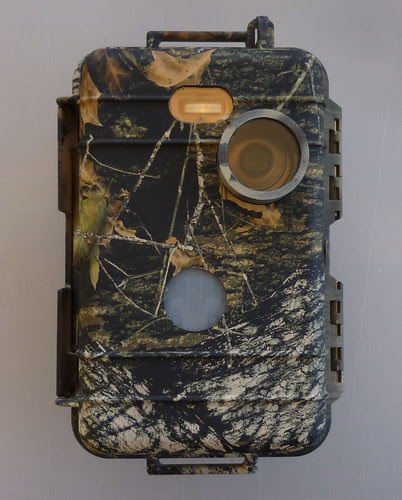 Next up: some results!