Tell it on the Mountain

Imagine having a flora-wise friend & mentor that you can go hiking with anywhere in California, and he knows every native plant, shrub and tree you see - whether blooming, dormant, or just a fresh sprout - as if he's been personally cultivating them for years. Their families, genera & species? Of course. But also their distinguishing characteristics, variations, life histories, interdependencies, and where else they grow. And, during his colorful tutorials, he richly quotes Jepson like Kenneth Branagh quotes Shakespeare. This friend is, in fact, a Jepson Manual crossed with John Muir that goes with you into the field, and that you don't have to carry.

Well, the Santa Clara Valley Chapter of the California Native Plant Society has such a friend. His name is Ken Himes, and aside from being a botanical maestro, he's a fellow with CNPS, and lifelong protector and practitioner of native plantology. And this last Sunday, I, and a fun group of CNPSers, got the pleasure of joining him for a hike on San Bruno Mountain.

Ken sure didn't disappoint in his choice of timing for the guided hike too. Not only were there over 50 species of California natives already blooming (muchas gracias El Niño tambien), he somehow Nostradamused into 1 of the approximately 14-1/2 days per year when San Bruno Mountain isn't completely shrouded in clouds or fog or bone-biting winds. Amazing.

Why San Bruno Mountain? Much like Edgewood Park, that I adore and visit often (and that Ken Himes leads the weed warriors within), San Bruno Mountain has interesting geology that includes fault zones, exposed serpentine rock, and thin soils (as well as those non-geologic winds and fogs). And thus, as seems to be true of many isolated serpentine areas (e.g., Edgewood, Ring Mountain Preserve...), there's also interesting and unique California native plants living there. In fact, several of the species we saw only grow on the mountain, and no where else.

Now on to the story that the mountain and Ken had to tell us that beautiful Sunday... 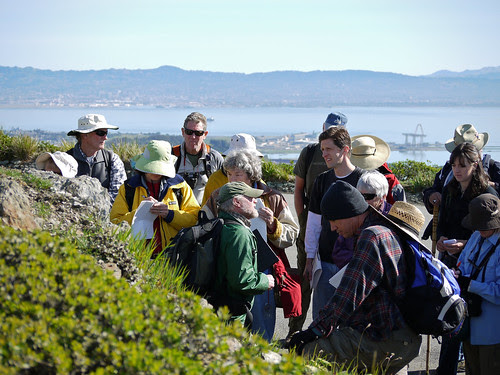 Ken starts his tale on the mountain top. San Bruno Mountain is actually a state and county park - lands are owned by both (as is management too I'll bet - fun!) 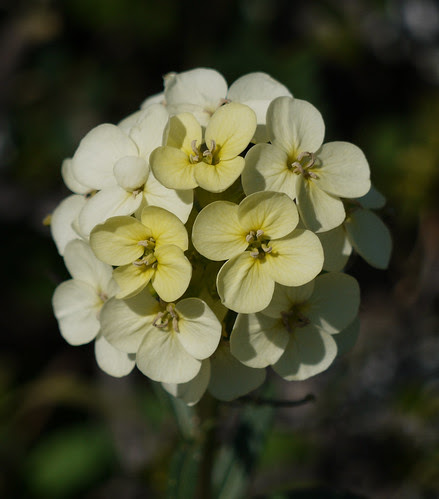 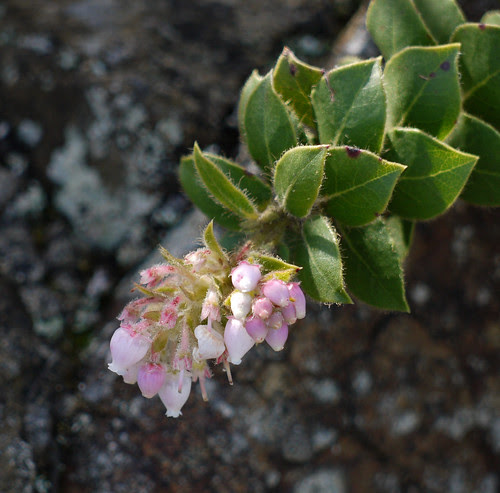 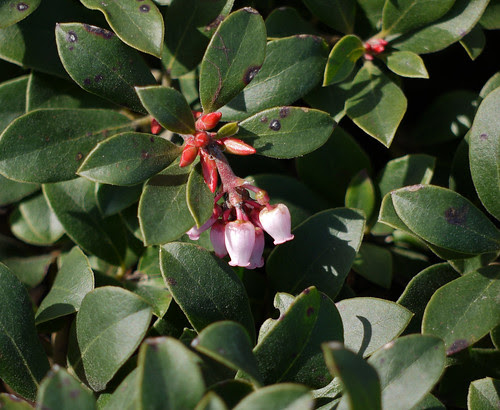 And while not endangered, the big, sprawling carpets of Bear Berry Manzanita, Actostaphylos uva ursi, are really lovely too 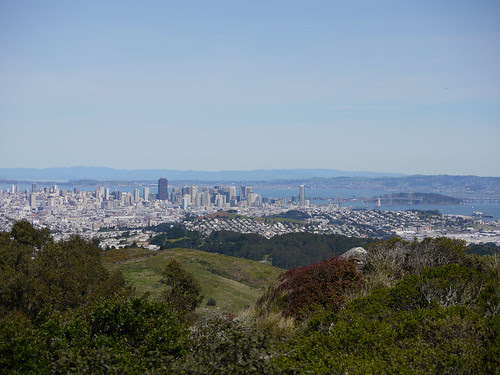 And the views aren't bad either - at least on a clear day... If you go, bring lots of layers, hats, gloves, windbreakers and warm stuff - it can be really foggy and windy 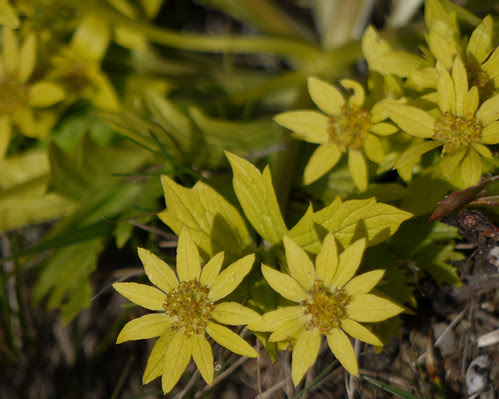 Footsteps of Spring, Sanicula arctopoides, are common along the trails - at a distance seeming like someone sprayed blasts of yellow paint here and there, but up close looking like little yellow Poinsettias 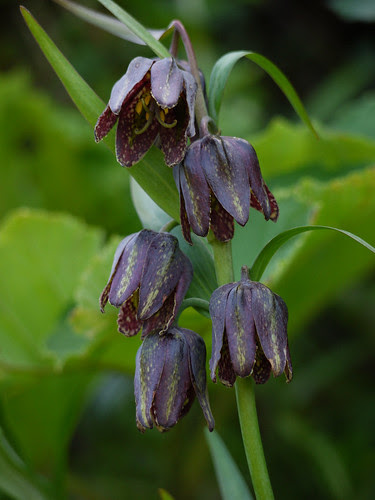 Surprisingly, Mission Bells, Fritillaria affinis, grow all over the mountain - in the shade, and even out in the "sun" (but 90% of the time there is no sun - just fog or clouds). This tall, dark beauty was right next to the trail in the chaparral, while other shorty bells hide in the grass in the windswept fields 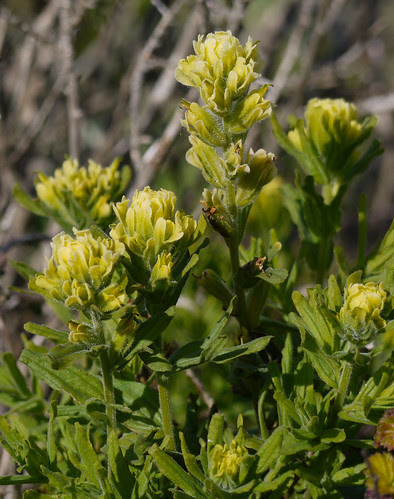 Wight's Paintbrush, Castilleja wightii, likes the chaparral too and can
be seen in yellow, orange and maybe red

And while the mountain and trails are mostly exposed, there are some ups-and-downs through riparian gullies with trees, tall shrubs, and some shade-loving wildflowers... 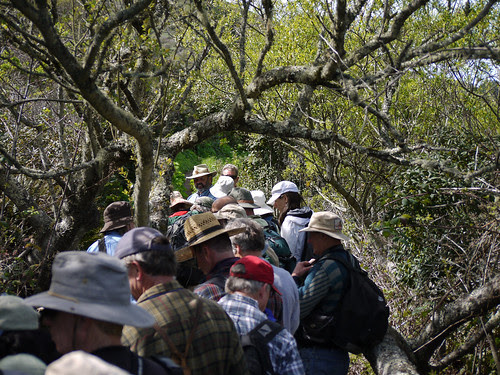 The gang stops for a trailside lesson - Ken's voice carries, but botanists (and
botan-wise-ists) in the CNPS group also nicely make sure everyone hears the details 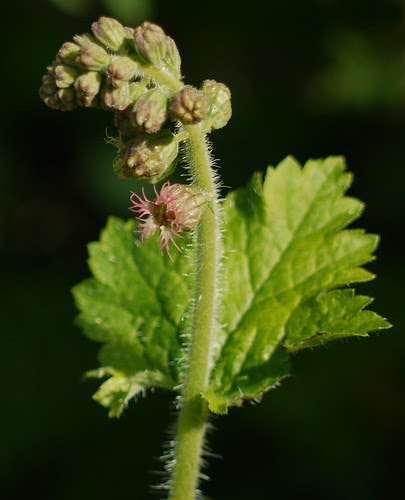 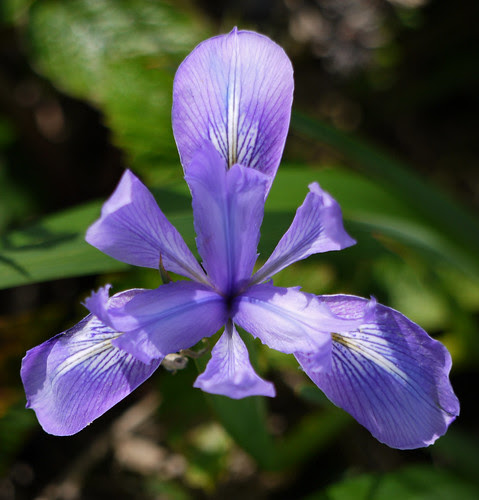 Down by Fern Rock we stopped to learn fern ID methods (of course), and ooow and aaaaw over some low-growing beauties on the hillside... 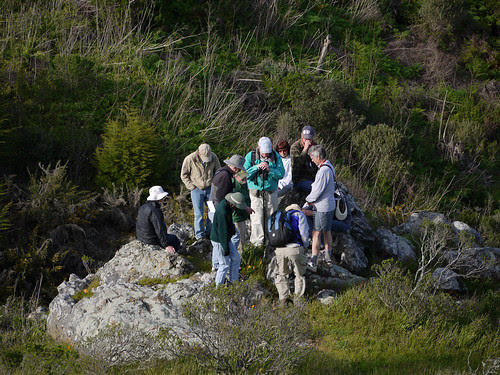 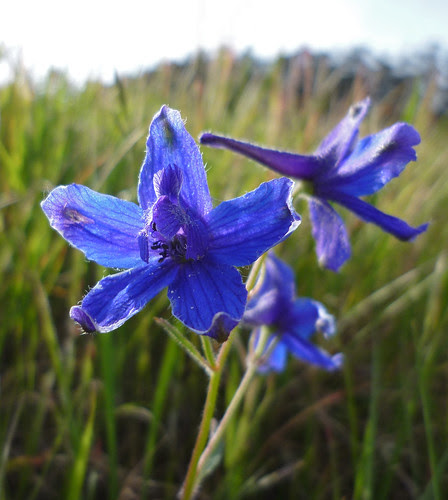 And even though the Sun was setting, a few of us also did a short, chilly apres-hike hike into a little canyon that hides some more San Bruno Mountain natives. The add-on was fruitful - we saw these 3 pretties that aren't all that common around our way... 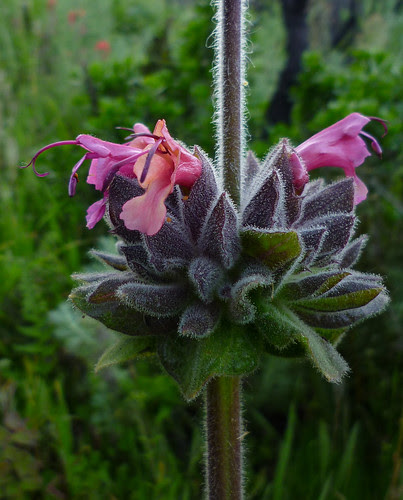 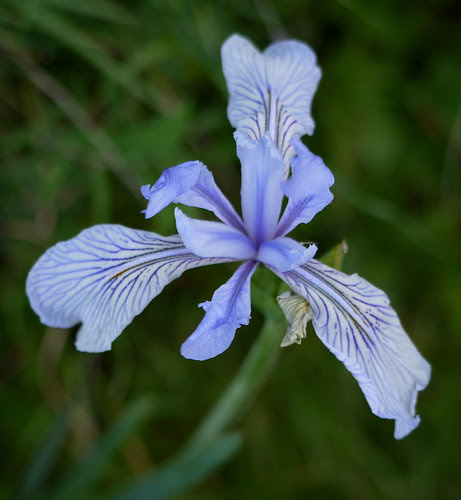 Another iris does too - Iris longipetala - the Coast Iris 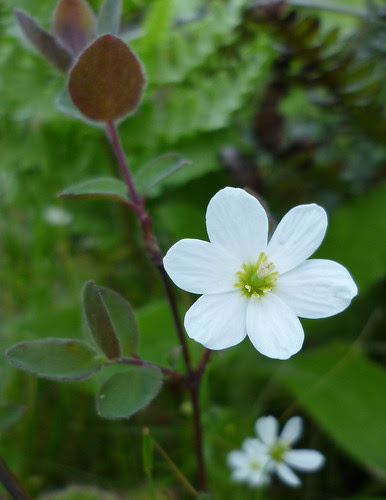 And we also found delicate California Fairy Poppies, Meconella californica, hiding in the dense growth to end the day.

But wait - there's more!
Here's a final collage of some of the other wonderful Cal natives we saw blooming that day: 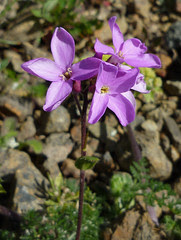 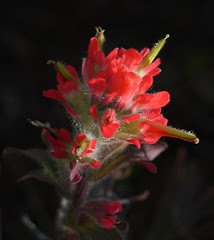 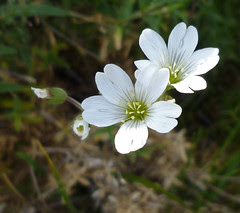 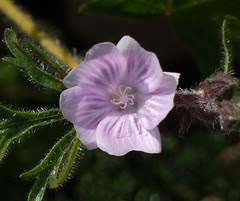 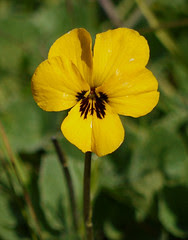 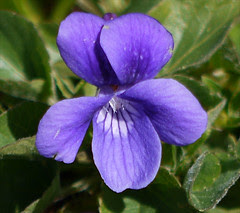 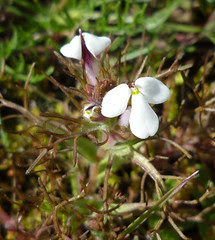 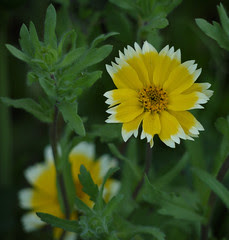 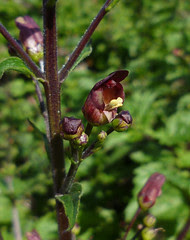 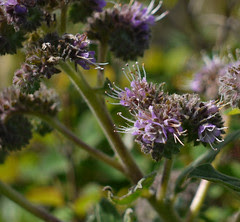 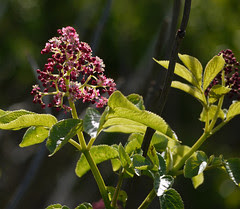 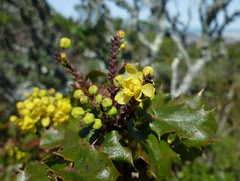 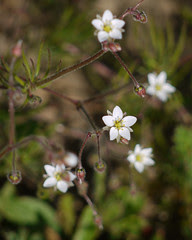 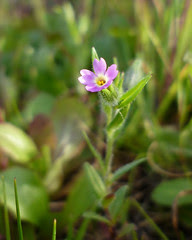