All I saw was a flash of emerald green & ruby red - and it nearly took off my head.

What was it you ask? A fast-falling Christmas tree bauble? A ballistically-enhanced bit of stocking-stuffed bling?

No - it was an aroused ornithological ornament flying at my face at 50mph: 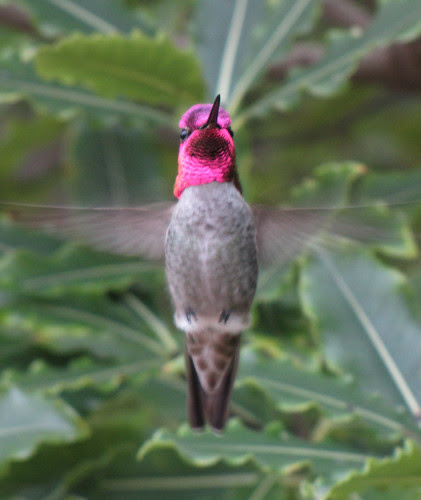 The episode started when a recent, rare frost smacked down my flowering shrubs, and caused them to drop most of their blooms overnight. Worried how this might affect any hummers around, I decided to hang a feeder. Little did I know what fun that simple act would create.

Within a day, a male Anna's Hummingbird moved in. No, that's too understated - he took over the joint. He unilaterally decided that my wee bit of backyard, with its fountain, feeder, and frosted flowers, is his eden, and he's quite ready to fight, needle-beak & tiny-talon, for it.

I see Anna's frequently - they're another common California character I adore - but this is the first time I've seen one so assertive, and with a territory so seemingly small. It really appears that my 35x40 foot postage stamp of a yard is his entire domain. He sleeps low in one of the trees or bushes, and has high squelching perches in strategic places around the perimeter. And he's a vigilant protector too - I hear/see him running off other male Anna's many times per day.

And, as mentioned, he's tried to run me off. Similar past fun encounters with these little guys 'n gals are why I have a little birdhouse in my soul for Anna's hummingbirds. They're just precious. They even have interesting history in their discovery and naming.

Collected for the first time in 1827 by lesser-known naturalist Paulo-Emilio Botta in a garden near Mission Santa Barbara, they were described into record by René Lesson, who named them Calypte anna, after the young, beautiful wife of a fellow collector, who just so happened to be the son of Napoleon's top General, the 1st Duke of Rivoli, Jean-Andre Masséna (considered by historians to be one of the greatest generals of all time).

Even the illustrious Audubon commented on her after a meeting in 1828 - "beautiful young woman... extremely graceful and polite..."

Politically-savvy tributes? Or, are naturalists closet romantics? Audubon did describe a crane the same way I think... :)

But there's no doubt Audubon understood beauty. I have a print of his original 1838 plate of Calypte anna. He captures them so perfectly, you can see why Britons clamored to subscribe to his works and be transported into the new natural world of the exciting Americas: 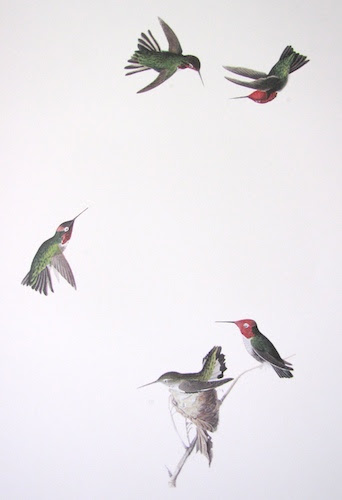 And he did the above piece from a dead, stuffed female specimen and nest he borrowed from Thomas Nuttall. Audubon never visited California.

Paul Botta's description of the tiny Anna's hummer he discovered is terrific: "a little ball of glowing iron throwing off rays of sparks. When several of them light on the same branch, the Arabian amateur of marvels might take it for a bough covered with precious stones, as in a dream from The Thousand and One Nights..."

Or, as I say, like a squelching, sequin-covered, Liberace-inspired, sparkling Christmas tree ornament, that can hurl itself at you at hyperspeed.

First time I've had 3 grams of bird charge me. That's the weight of a penny.

But I can't fault the feathered fellow - he's driven by hormones. You see, Anna's actually overwinter here in California (most hummers migrate), and December is the beginning of mating season. He's trying to call down a lady Anna's (a Duchess?), and he thinks my backyard is a chick-magnet. How flattering.

He's got his routine down too. Each morning, once the sun opens the sky, he takes his bath: 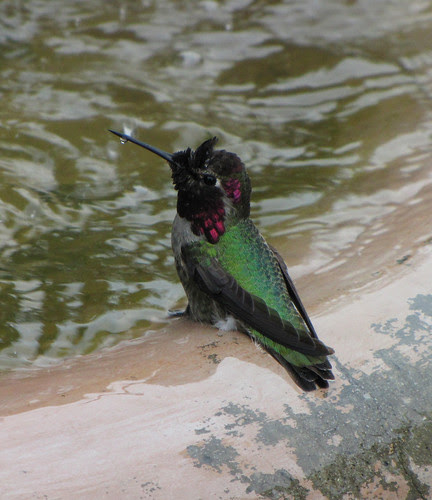 Then he preens & fluffs: 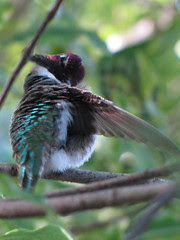 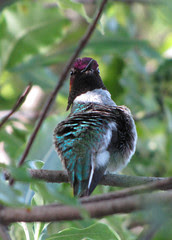 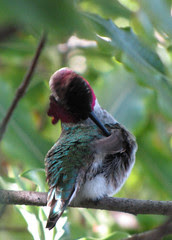 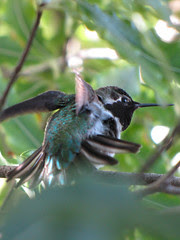 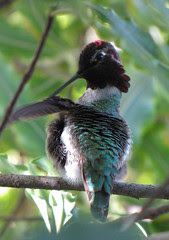 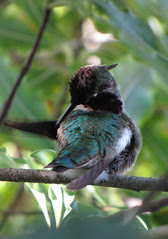 
And then, squeaking & squelching from the tree tops, he sings the day away - sunny, or gray: 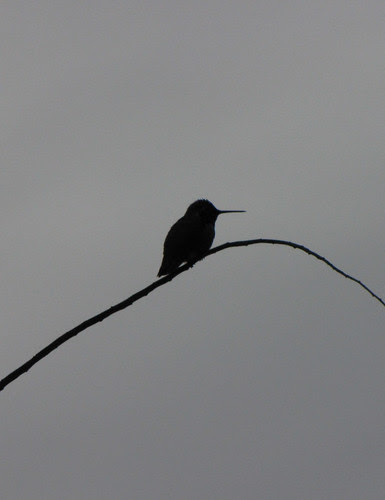 Anna's Boy singing for the ladies on an overcast day

Every 5 minutes or so, he buzzes down for a sip of nectar: 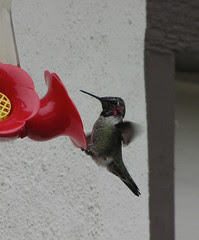 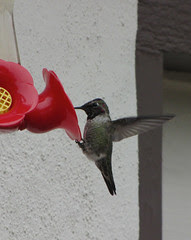 And, on demand, he chases away any potential usurpers. He's not sure about me though. Sometimes he casually lets me get within feet of him for nice shots. Other times he starts flashing, or sticks his tongue out. And sometimes he plays coy and just buzzes off. 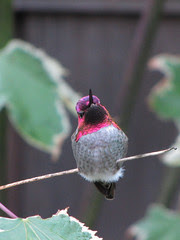 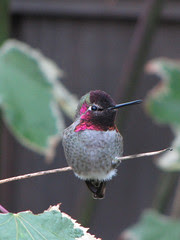 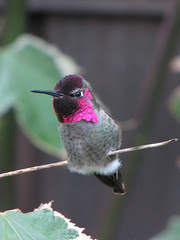 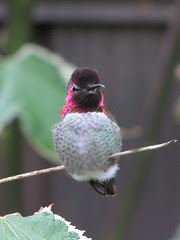 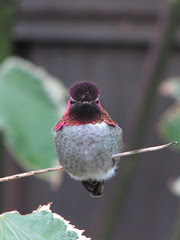 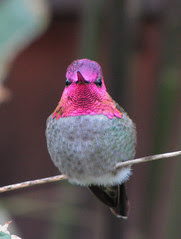 My friend is feisty and fickle. That's ok - for him - I'll always keep the nightlight on inside the birdhouse in my soul.

More photos of Anna's Hummingbirds that I've taken in my wanderings... 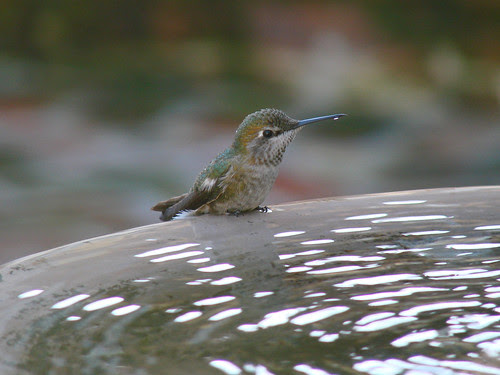 No ruby red headdress on female or juvenile Calypte anna 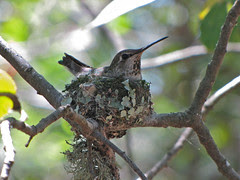 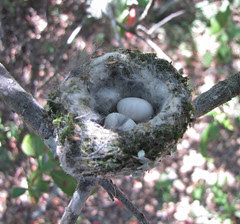 Females always lay 2 eggs. Nest is made of lichen, spider's silk & feathers. Cozy!
This Anna's Hummingbird nest was directly under a Cooper's Hawk nest (it at 25 feet and
the Anna's at 5 feet high). Hummingbirds do that for protection - the presence of the Cooper's
Hawk scares away all other birds & rodents that might go after the hummer's eggs,
but the hummingbird stays safe because they're too small to be a meal for the Cooper's. 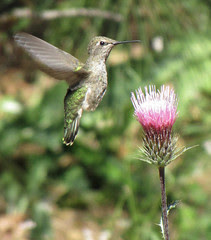 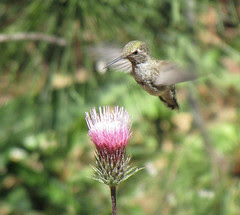 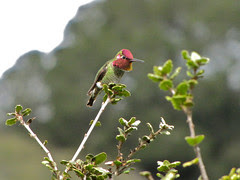 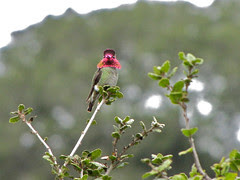 Another feisty flasher on a high perch at my local park

How to make food for feeders
Making nectar for hummingbirds is easy. Use a 4:1 ratio of water to sugar (e.g., 1 cup water, 1/4 cup sugar), and boil & sterilize everything to get rid of germs. I.e., bring water to boil, stir in sugar, and boil moment longer. Then cool and store in fridge. Keep the feeder clean with the same diligence. Here's a great resource with more details on making the nectar, and another on how to make your own feeders from simple plastic bottles and cups.

Plants I've found they like
Anna's Hummingbirds are crazy for Abutilons (Mallows) and Salvias (Sages). Both are from their range, so that doesn't shock. Other native Mallows, and California Fuchsia also get a lot of attention. Of course, they like many garden exotics & cultivars too. Trumpet Vines are a fave.