The little Miwok boy dashed between the rocks of the Sierra creek bed. His cornered "prey" squeezed into a crack in an attempt to outlast the agile lad. But he was too smart for that. Some deft work with a long blade of grass gave him the tool he needed. With a snap of his wrist he looped the lizard around the neck, and popped him out of the crack and into his hand. He tossed the slip-loop aside, and inspected his new blue and black friend. "Gentle!," his Father called with a laugh as he fished nearby. "Remember - his great Ancestor gave you hands!" "Be hard to catch them with paws!," added his Big Brother from downstream, where he fished a second pool.

That's right!, the wide-eyed boy thought. The storytellers had sung the tale. Coyote and Lizard created the world, and when Coyote made people, it was Lizard who fought to get us hands like his so we could use tools! He stroked the blue chin of his small friend. It's eyes closed in hypnotic appreciation. After a moment, he carefully set it by to the crack and whispered "thank you." The smile in his eyes almost seemed mirrored by the lizard as it gazed back at him. Then it scuttled into the crack. "There's another one!" he called out. "And he's even bigger!" He scampered its way. After all, he thought, I have 10 fingers to thank Lizard for too!

His Father & Brother laughed again, their fingers resting gently on their lines, carefully controlling the tension and feeling for nibbles and bites, as the hooked-grasshoppers tumbled down the rapids, and into the pools where the fish lay. They both recalled the many days when they too had chased among the rocks, and thanked Lizard for the gift of clever hands.

I'm a big fan of fence lizards. To me, they epitomize the long, hot summers of rural California living. Bright skies, dry grassy hills, the buzz of bees, the shade of oaks, the smell of pepper trees & fennel, and a blue belly on every stump, log & interesting rock. As a kid we chased them relentlessly. Especially around my Grandparent's pool that backed up to the local creek. They can live 5 or 6 years, so I'm sure we caught the same ones over and over and didn't realize it.

"Where have you been? I've been worried sick. Have you lost your tail again?"

"Yeah - those kids caught me out sunning by the pool pump again..."

We hunted them so often that as a prank birthday gift, my Aunt made me a lasso for catching 'em. You know - the classic string 'n hang-man's noose attached to the end of a long stick ala the big game hunters of Hatari!? Little did we know that many experts actually do make lassos for catching lizards. Little did she know that we could more easily catch them with our hands, put them in the lasso, and then get her back by telling her that her prank worked "just great!" Ha! 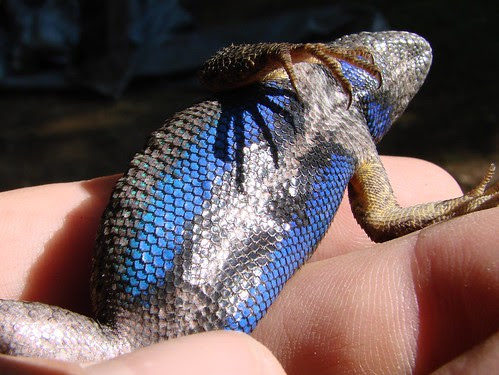 Well, ever since we removed a couple of problematic trees and opened up the back patio of our family lodge to Father Sun, several of these aspiring micro dragons have taken up residence. Makes sense - there's warm stones and sunning logs, convenient nooks & bolt holes, and an endless supply of ants plodding along in ready-to-enjoy buffet lines. A veritable Eden for Western Fence Lizards. And, the many windows overlooking the patio allow camera-toting Western Nature Lovers, like me, a blind-view eye into their fascinating world.

A recent episode began with a glimpse of blue caught by the corner of my eye. It was Blue Boy out for some afternoon push-ups in the warmth of the newly emerging spring sun... 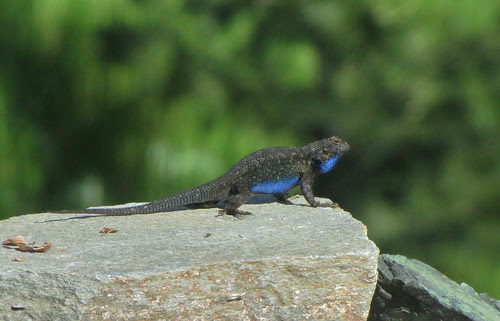 I stopped to watch. His push-ups were quite splendid. His flaring of chin & chest spectacular.

Len Goodman of ABC's Dancing with the Stars would probably have given him an 8. But then, the Brits call them "press-ups." When a Brit buddy of mine told me he could do "100 press-ups" I suggested that he call them "push-ups" or 100 will never be enough.

As I watched a bit more, I realized why Blue Boy was so vibrantly colored and purposefully pressing. It's spring, and he was trying to catch the eye of the Fair Maiden who lives in a log bench 1/2 way down the patio... 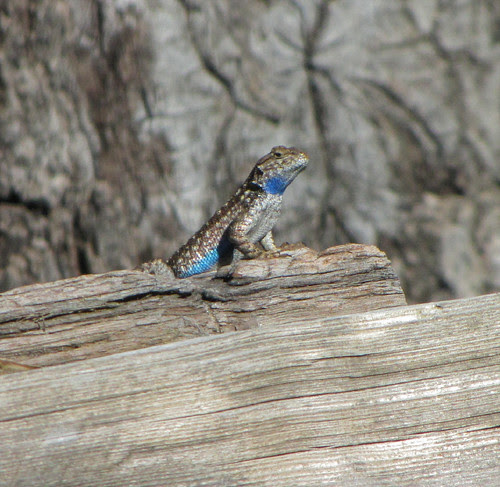 Fair Maiden watching Blue Boy (female Western Fence Lizards have blue bellies too, but it's lighter and they often have much less blue on their neck (or even none). Like males, the blue does brighten during mating spring season)

After a few more push-ups, Blue Boy wandered over and Fair Maiden came down from her promontory to have a look at him. So, he did the shimmy for her - swishing around her in "S" motions, while shuddering and vibrating like a break dancer. She watched ever so casually. 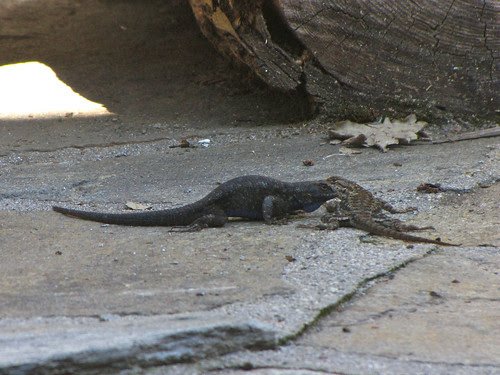 And as she coyly climbed her log bench lair, he kept up his smooth lizard strut in pursuit: 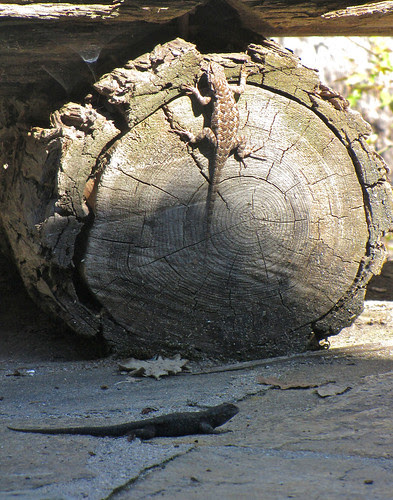 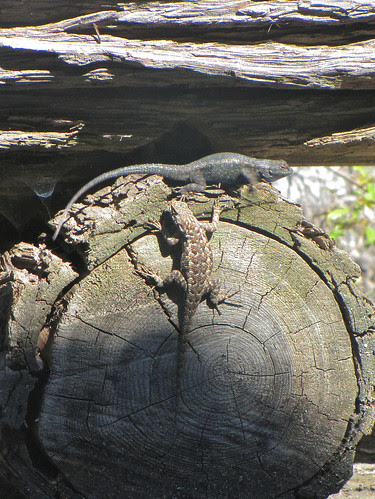 His romancing musta worked too. Here's the happy couple at her den a little while later... 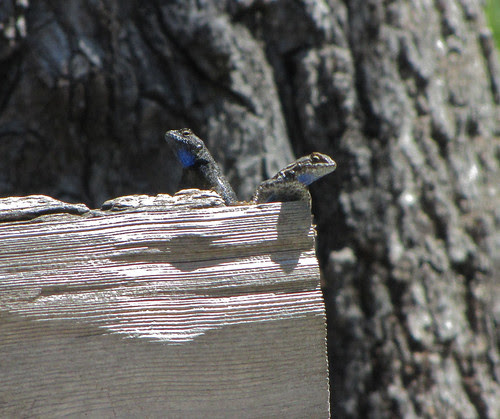 We'll have to watch for little baby blue bellies this summer.

Here's an amazing reason why it's so great to have Western Fence Lizards around your yard - they reduce the chance of Lyme disease! Deer ticks (the prime tick carrier of the Lyme disease bacterium Borrelia burgdorferi) are so small that they commonly feed on fence lizards - especially around the ears. Here's a closeup of a sweet soul with a few ticks: 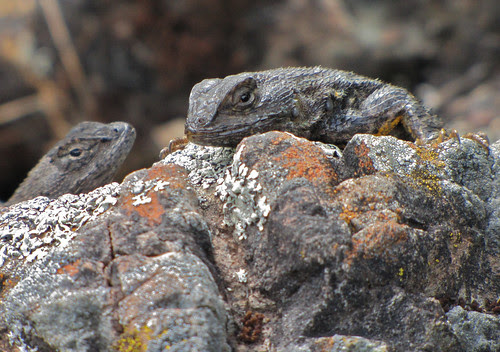 Well, it's been found that after biting a blue belly, the deer ticks become bacteria-free. Yep - they're disinfected. Apparently, a protein in the blood of Sceloporus occidentalis kills the bacteria (Sceloporus undulatus has it too for you Eastern Fence Lizard fans). As a result, the incidence of Lyme disease in areas with fence lizards is lower than in areas without them.

So next time you see a fence lizard, give it a head bob in thanks. And if you live in an area with fence lizards and deer, you might wanna put out a few interesting rock piles and perches to attract our little blue bellied friends!

How to be a Lizard Wrangler

It's fun to watch and catch blue bellies to check 'em out. Here's a couple of tips and tricks and things to think about when doing so.

First, blue bellies have territories, so you should always release them where you caught 'em. That way they can refind their home. I.e., think alien abduction and leave no evidence that it was gone...

"Dude - I was catching some sweet rays when I was suddenly transported to some far away world and prodded and inspected by gigantic aliens..."

If you do keep 'em for a day or two, make sure they have air and some Sun. And a rock or some leaves for hiding, and some bugs for snacking. I use a terrarium that's about 2 gallons.

Blue bellies have good vision, but like many critters, it's very motion-oriented. If you see one looking at you from a distance - bob your head. They'll often see this motion, think it's another lizard doing territory "marking" push-ups, and respond in kind. It's quite funny to get a good back-and-forth head bobbing going.

You can also leverage their motion-vision to "sneak" up on them in plain view. Move slowly, go in a direct line, and keep your profile shape unchanging. I.e., don't wave your arms, move left-right, or make motions they'll see and think is a hawk or like. I've walked up, eased my hand in and stroked their chins before (to the jaw-drop surprise of lizard-illiterate friends).

Fence lizards can drop/lose their tail, so be gentle when catching and handling them. They'll grow it back, but it's a defense mechanism, so they'll be less safe until it does.

They're fast when warm! They can move as quick as any rodent, so try to catch them by surprise and/or when they're colder. Or make a lizard lasso. :)

They can really hop. I've watched them casually jump over 3 feet. From patio to tree, from rock to rock in the pond... That's about 6 times their body length. Amazing. Be like us jumping over 30 feet from a stand-still. In basketball, it's only 23 feet from the 3-point line to the rim...

Last, some do like their bellies and necks rubbed. Really. Stroke them gently (if the lizard isn't too freaked out), and they'll blissfully lie on their backs with feet in the air and eyes closed, and you won't even need to hold onto them. 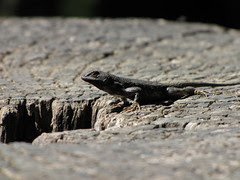 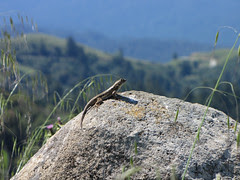 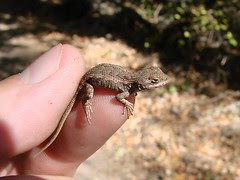 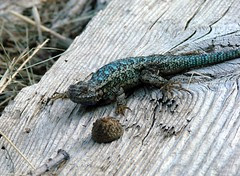 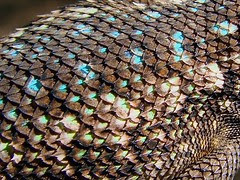 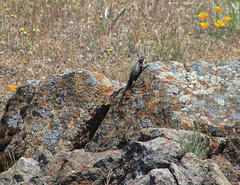 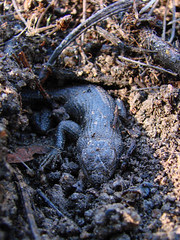 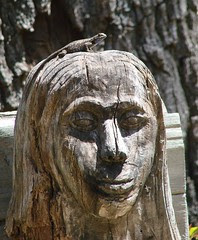